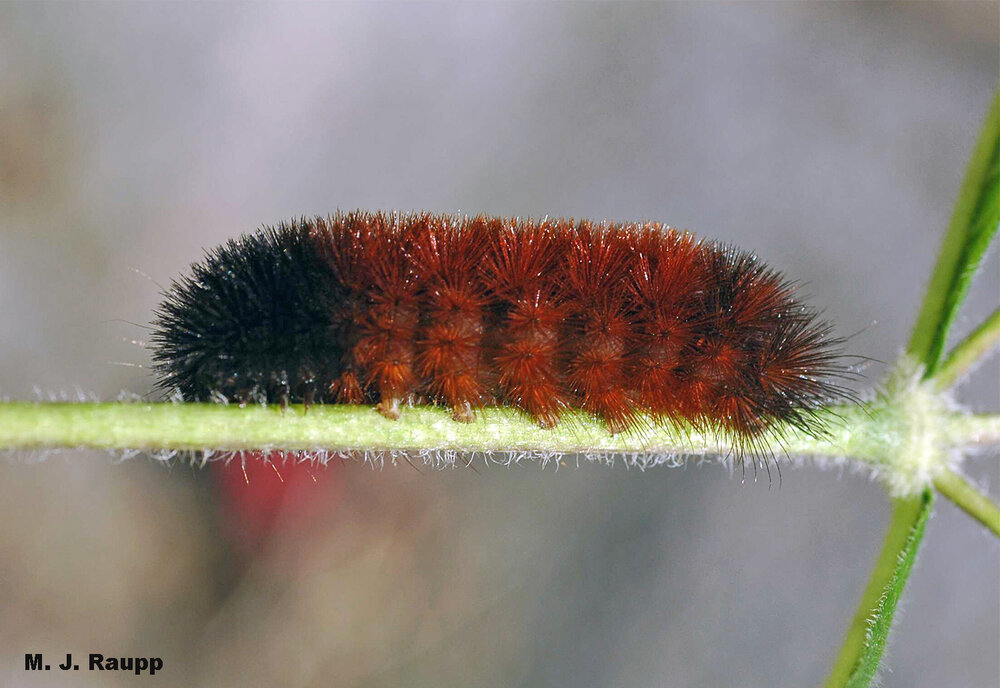 Does the wide orange band portend a mild winter ahead?

I usually think of caterpillars as rather delicate creatures and sometimes wonder how they survive bone chilling cold in places like Maryland where polar vortices sometimes visit. A fascinating study by Jack Layne and his colleagues revealed that woolly bear caterpillars survive winter’s cold through a process called supercooling. As temperatures drop in autumn and early winter, woolly bears and many other species of insects produce cryoprotectants, antifreeze-like compounds including glycerol and sorbitol, that prevent the formation of lethal ice crystals in their bodies. This brew of Mother Nature’s antifreeze allows caterpillars to survive even when ambient temperatures dip well below freezing. 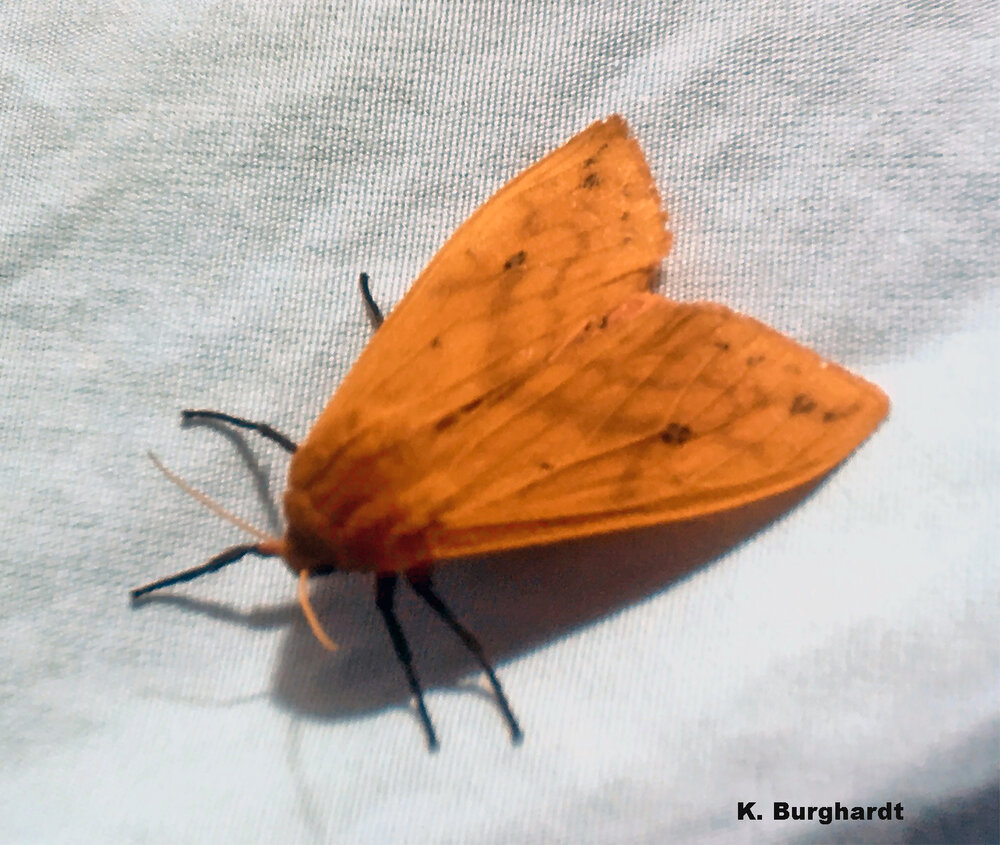 One of the most interesting and commonly encountered caterpillars of late autumn is the banded woolly bear. This dashing caterpillar began life in spring when it hatched from an egg laid by its mother, the Isabella tiger moth. Eggs deposited on nutritious vegetation, maybe a dandelion or an aster, hatch into leaf-munching caterpillars that feed during spring, summer and autumn on a broad range of plants. However, the caterpillar fails to transition to a pupa during the growing season. The partially grown woolly bear passes the winter, or, in bug-geek-speak “overwinters”, as a larva. In spring with the return of warm temperatures and arrival of fresh leaves, it feeds a short while before spinning a cocoon and completing the transformation to an adult moth. The pretty orange moth is rather unremarkable as tiger moths go, but the caterpillar certainly catches one’s attention with its alternating bands of black and orange.

A popular folktale has it that the woolly bear can forecast the harshness of an approaching winter. A wide orange or brown band in the middle bordered by black bands at head and tail indicates that a mild winter is at hand. Conversely, a narrow band of brown or orange means that a long, severe winter is on the way. A noted entomologist from the American Museum in New York City, Dr. C. H. Curran, tested this idea by collecting woolly bear caterpillars from nearby Bear Mountain Park each year between 1948 and 1956. He used band-width observations to forecast the severity of the upcoming winter and his observations gained notoriety when published in the New York Herald Tribune. Several other entomological experts around the country have used various clues garnered from the woolly bear to predict the winter weather. Claims of 70-80% accuracy are not uncommon.

A banded woolly bear races across my driveway to find winter refuge.

A bit earlier in the season, I discovered a tiger moth caterpillar dressed only in orange and was delighted at the prospect of an incredibly mild winter. I imagined paltry fuel bills and fantasized about how I would spend the extra money. Unfortunately, a little research revealed this pretty orange caterpillar to be the saltmarsh caterpillar, Estigmene acrea. The saltmarsh caterpillar lacks black bands and, apparently, any ability to predict weather.

The gorgeous and very hairy saltmarsh caterpillar fattens up on weeds in preparation for its wintry respite.

A bit later in the season a viewer sent me an image of a solidly black tiger moth caterpillar, one completely devoid of the hopeful orange band and obviously the herald of a dreadfully long and bitterly cold winter. 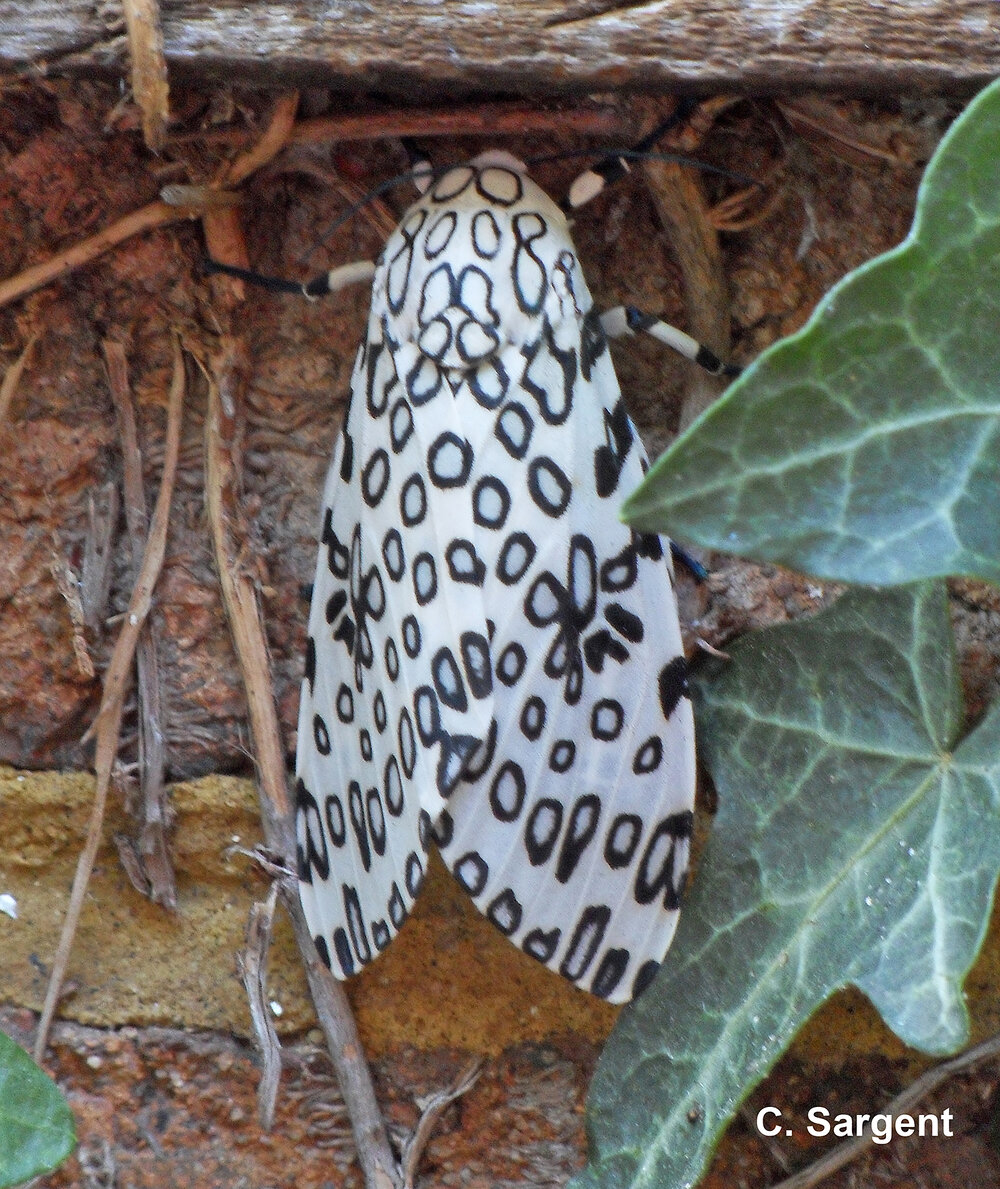 The adult leopard moth, mother of the giant woolly bear, is a thing of beauty with black patterned white wings. 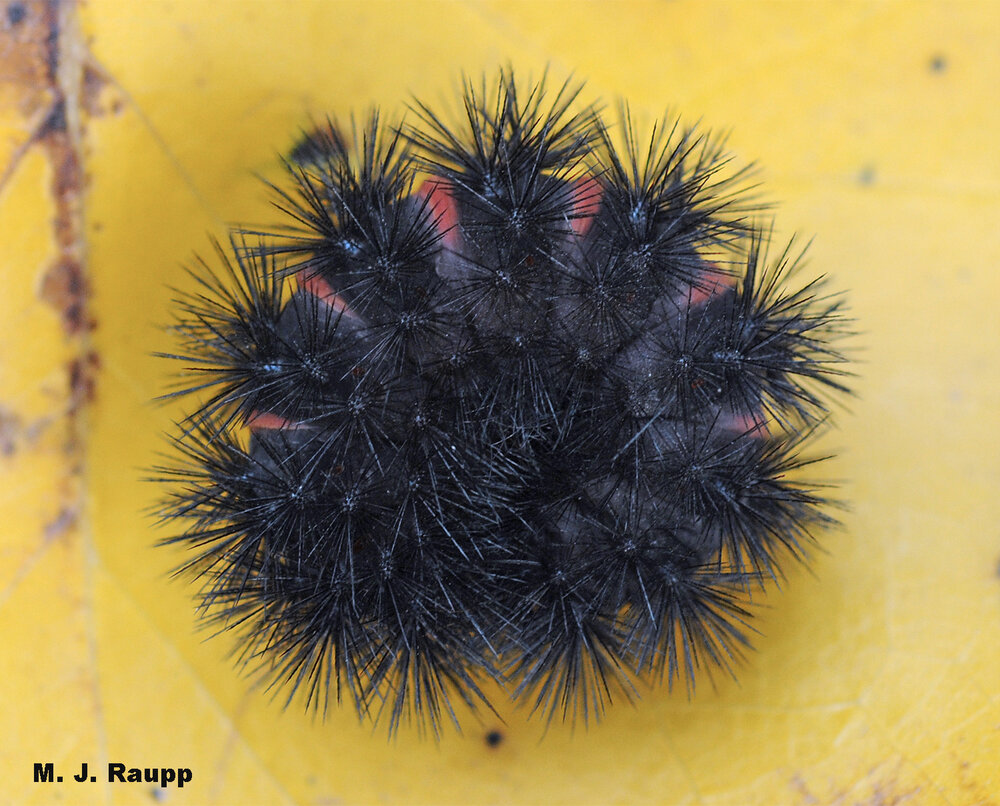 When threatened, the giant woolly bear caterpillar presents a phalanx of stout spines punctuated by crimson rings between body segments – a strong warning to would-be predators and bug geeks.

When disturbed by a predator or bug geek, the caterpillar curls into a tight round ball of prickly black spines. What an unappetizing meal for a would-be predator! The adult is a fantastic large moth with a white coat adorned with black circles, bars, and dots. In the waning days of autumn, enjoy these caterpillars as they dash about and please leave them undisturbed if you discover them beneath a pile of leaves or under the loose bark of a tree where they are chillin’ out for winter.

Bug of the Week thanks Sheri, Finn, and Iggy for inspiring this episode and Karin Burghardt for providing images and identifying featured caterpillars. David Wagner’s remarkable book, “Caterpillars of Eastern North America”, was used to prepare this story, as was the interesting article “Cold Hardiness of the Woolly Bear Caterpillar (Pyrrharctia isabella Lepidoptera: arctiidae)” by Jack R. Layne Jr, Christine L. Edgar, and Rebecca E. Medwith.