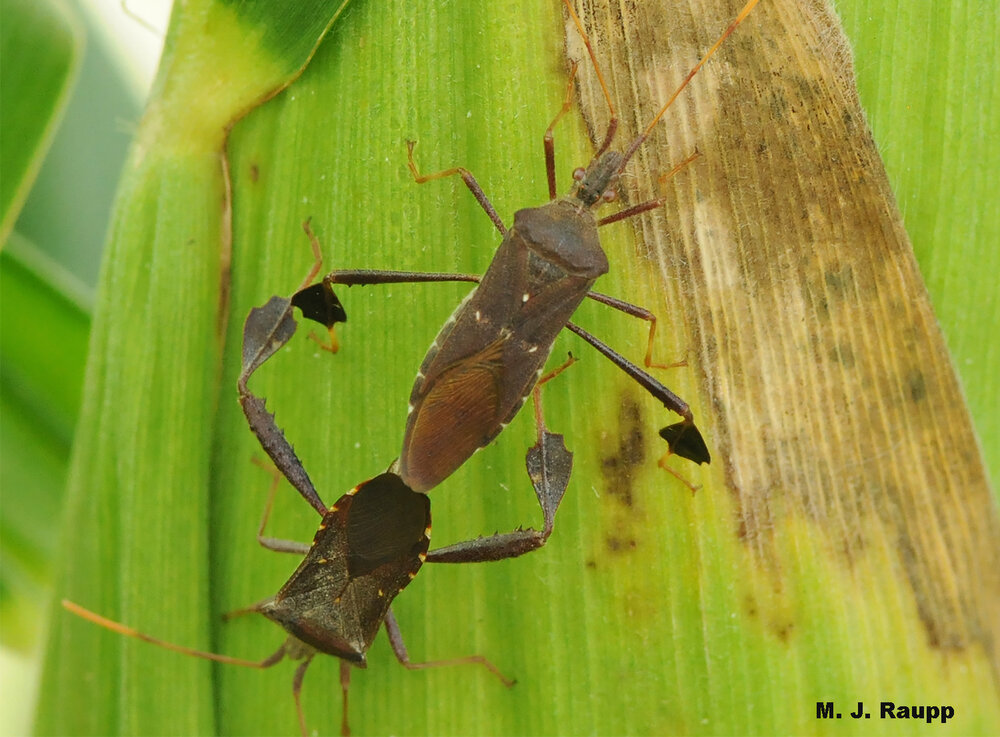 The female leaffooted bug enjoys a tasty corn snack while engaged with her mate.

As summer turns to fall, many insects with gradual metamorphosis, those with nymphs rather than larvae as juveniles, become adults and are more easily seen as the larger adults. This spawns a spate of requests from curious citizens to answer the question “what’s this bug?” In previous autumn episodes we met ferocious wheel bugs, deadly orange assassin bugs, and spooky milkweed bugs. This week we continue our sojourn into the realm true bugs, insects in the order Hemiptera, and learn the aromatically romantic ways of leaffooted bugs.

How do I get around this giant hand that keeps following me? And this guy with a camera, what’s up with that? (Note the eggs of a parasitic tachinid fly deposited in the back of the adult bug; death is just around the corner). 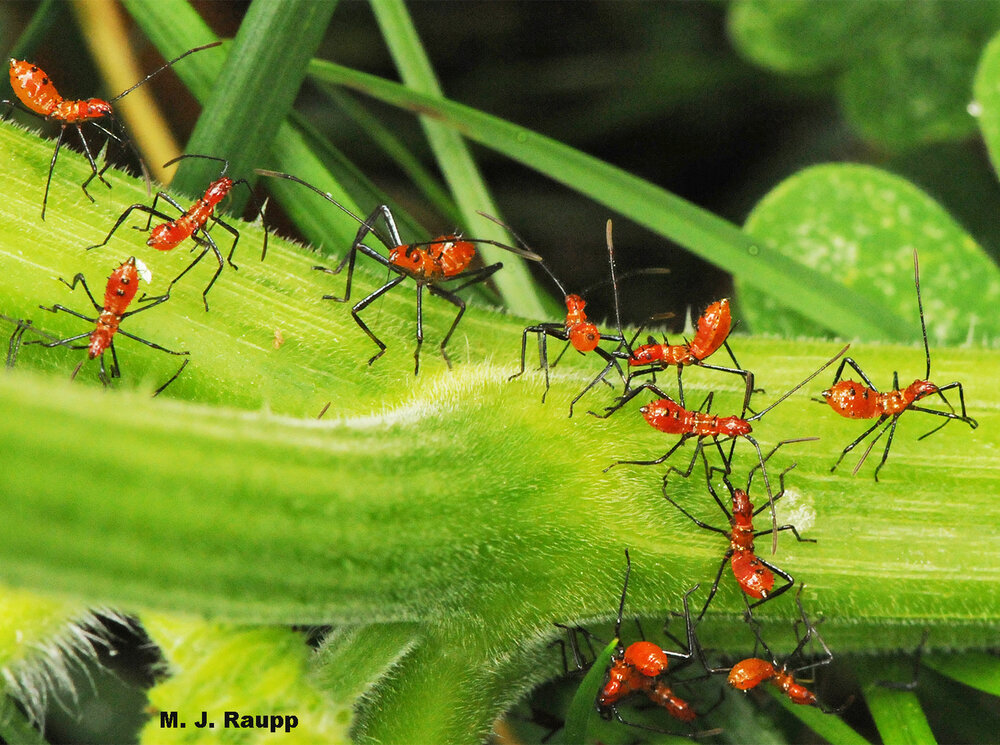 A gaggle of leaf-footed bug nymphs dines on my pumpkin vine.

On a past visit to a cornfield, in addition to bevies of brown marmorated stink bugs, I notice legions of leaffooted bugs probing kernels of corn directly at the tips of the ears or through the tough cover of the husk. Named for the leaf-like expansion of their hind legs, leaffooted bugs belong to a guild of suckers that insert their hypodermic-like mouthparts into tender plant tissue. After injecting saliva laced with digestive enzymes, they withdraw nutritious fluids from the unfortunate plant. Both the bright red and black immature stages called nymphs and the winged adults feed in this remarkable manner. In addition to sucking the life from corn, the catholic diet of leaffooted bugs includes crops such as cotton, squash, and tomatoes, trees such as oaks and maples, conifers, vines, and shrubs with representatives from fifteen families of plants. 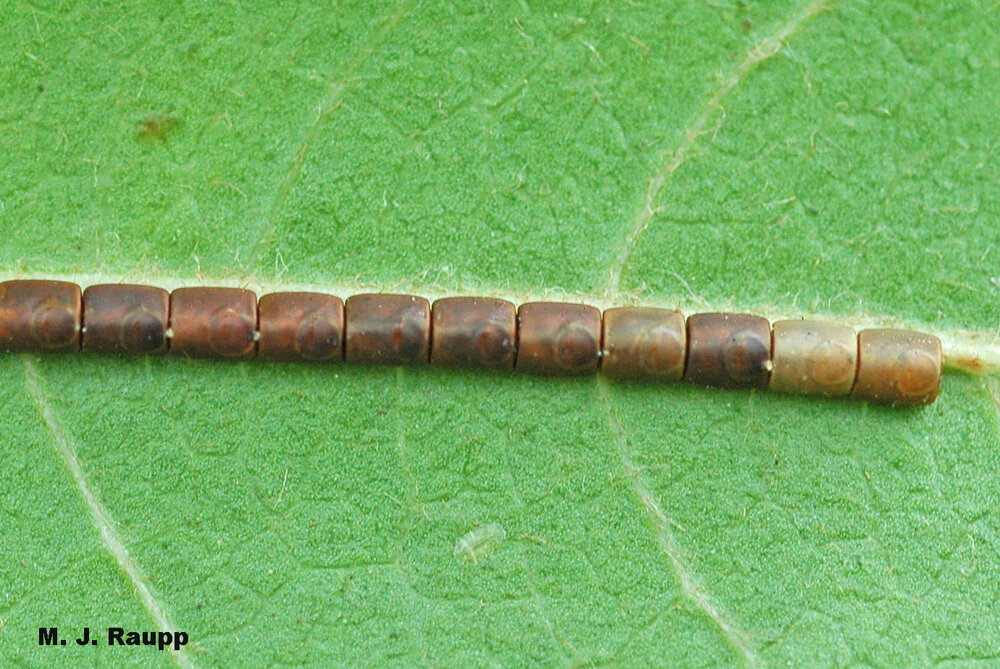 Adult leaffooted bugs live for several months and dine on many plants, but their reproduction occurs only in the presence of reproductive structures such as fruits on their host. Eggs of leaffooted bugs are curious contraptions resembling tiny barrels, tipped on their sides, aligned in a neat row. One can only wonder about the strangely linear thinking used by the bug as she neatly arranges her brood on the surface of a leaf. A circular bunghole on the side of each barrel provides the tiny nymph inside with an escape hatch once its development is complete. 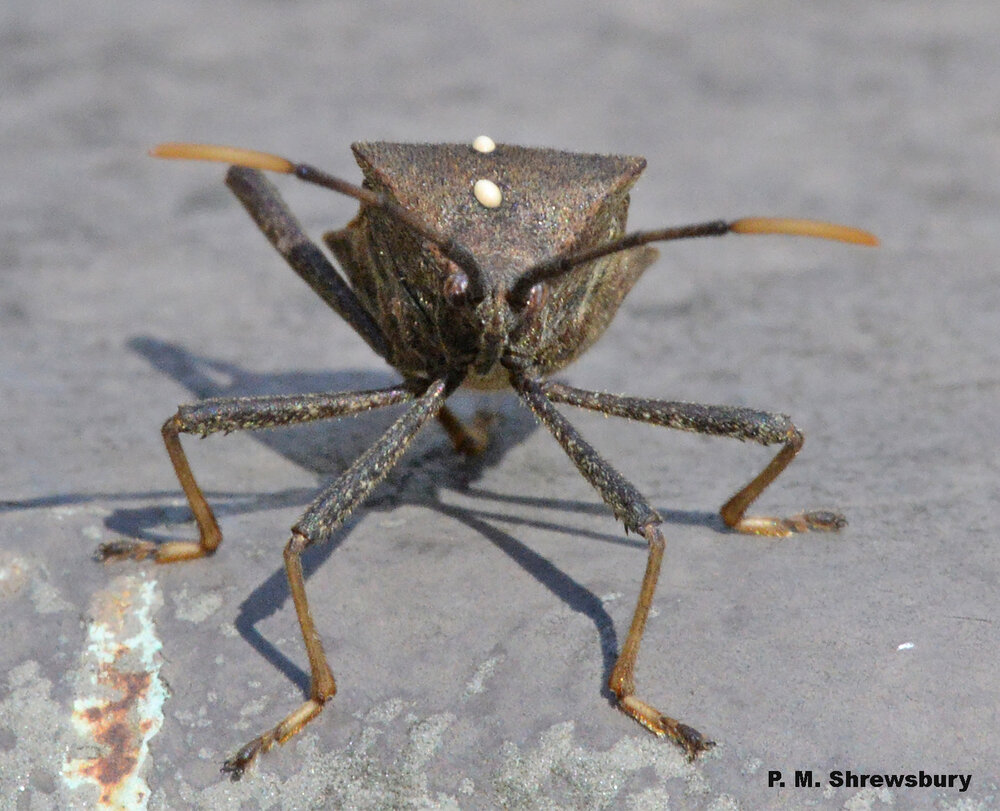 Uh oh, a doomed leaffooted bug has been visited by a tachinid fly. Larvae that hatch from eggs on its thorax will bore into the bug, consume its internal organs, and seal its fate.

Like brown marmorated stink bugs we met before, leaffooted bugs release nasty scents to ward off attacks by hungry predators. However, male members of the leaffooted clan have one more aromatic trick up their sleeve. A small gland in their abdomen produces aromatic compounds with the delightful scents of cherries, vanilla, cinnamon, or roses depending on the species of the bug. Each bug has a unique blend of these compounds, known as pheromones, that allows the fair member of the species to locate and accept an appropriate mate.  But in this game of olfactory romance, danger awaits. A clan of parasitic flies called tachinids uses several cues, including the pheromones of true bugs, to track their victims. Upon sensing the pheromone, they follow the trail to its source and deposit eggs on the exoskeleton of the bug. Eggs hatch and tiny maggots drill through the exoskeleton and enter the soft tissues inside the bug. Here they will feed and develop, eventually leading to the bug’s demise. So, in the realm of romance for the leaffooted bug, beauty truly is only skin deep. It’s how you smell that really counts. But does the peril of death sometimes accompany the fragrance of attraction? Maybe only male leaffooted bugs know for sure.

Bug of the Week thanks Jeff Aldrich for an interesting discussion that was the inspiration for this episode. The fascinating articles“Host Plants of Leptoglossus oppositus (Say) (Hemiptera: Coreidae)” by Paula Mitchell and Al Wheeler, “Bug pheromones (Hemiptera, Heteroptera) and tachinid fly host-finding” by J. R. Aldrich, A. Khrimian, A. Zhang, and P.W. Shearer, and “Species-specific natural products of adult male leaf-footed bugs (Hemiptera: Heteroptera)” by J. R. Aldrich, M. S. Blum and H. M. Fales were used in preparation of this story.