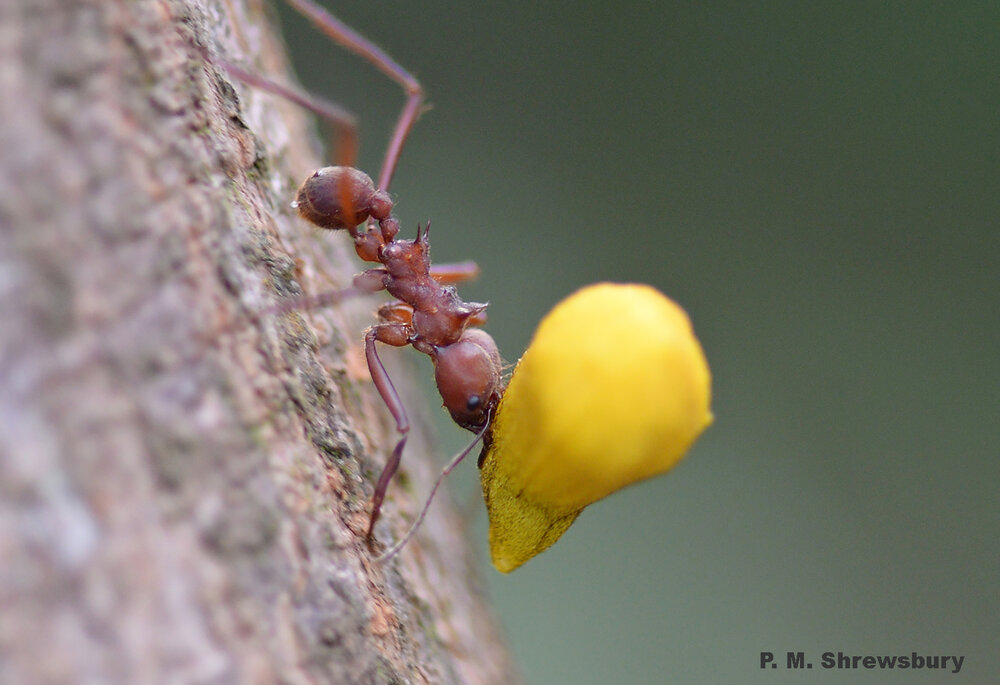 Leaves and buds of Brazilian fire tree are transported from the treetop to the colony by major workers.

Last week we traveled to Costa Rica and met a captivating caterpillar in the tropical rainforest. Over the next several weeks, we will visit several species of ants, so called superorganisms of the tropical rainforest, creatures with social structure and specialized roles that, as individuals, cooperate and contribute to the success and survival of their colony. It has been said that on planet earth only two creatures cultivate crops: humans and ants. So, let’s return to the tropical forests of Costa Rica to visit these farmers who are the most important group of herbivores found in tropical forests in the New World, leafcutter ants.

Leaves of a small shrub are disassembled by powerful jaws of major workers. Figuring out just the right way to carry the leaf is tricky business, but once lifted overhead, it’s off to the races and back to the colony.

Night and day members of the worker caste search for nutritious leaves on trees, vines, and shrubs. When scouts find a suitable food source, they direct other workers to the bounty by releasing trail-marking chemicals called pheromones. The amazing jaws of major workers clip small sections of leaves and flowers and carry them to the ground, where they join a rambunctious procession of nest mates. In this parade, intermediate sized workers busily transport leaf sections while smaller workers sometimes hitchhike on leaves and help defend their sisters from marauding predators and parasitic flies. Nearby, large imposing soldiers also defend their sisters and the colony with powerful jaws. As leafcutters remove foliage from a tree, a parade of ants may extend for distances of more than 200 yards as workers carry leafy cargo back to a subterranean nest.

On a nearby tree, flowers and flower buds travel to the ground. Transporting flowers seems relatively easy, but carrying a bud seems to be a challenge. Watch a worker as she finally figures out how to haul a flower bud. Amidst the hustle and bustle of the ant trail, blossoms disappear underground to fuel the nutritious fungus garden. 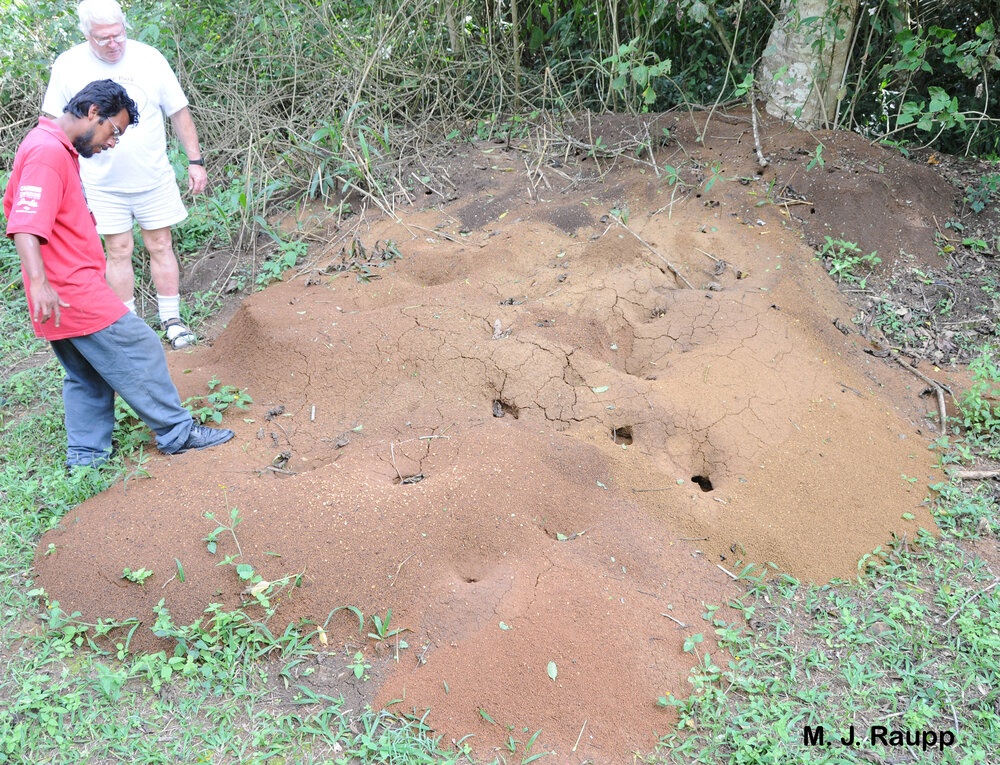 Ventilation shafts cool the underground ant colony and provide for the exchange of gasses.

A leafcutter nest is a marvelous structure that may contain several million ants and occupy 600 square meters of forest floor. Sophisticated ventilation systems cool the bustling nest and allow carbon dioxide to escape while drawing in oxygen. Once inside the nest, leaves are delivered to other workers that take the leaf sections and clip them into ever smaller fragments. These fragments are carefully inserted into a garden of living fungus maintained by the ants. Leaves serve as a substrate for fungi, which is harvested as the source of food for the entire ant colony. The fungus garden is meticulously tended by workers. Destructive alien fungi are detected and removed. Secretions produced by the queen and workers facilitate the growth of the cultivated fungus. Fungal strands produce specialized structures called gongylidia. Gongylidia are fed to the developing larvae and distributed throughout the colony to feed workers and the queen. Due to their agrarian life style, leafcutter ants are also commonly called fungus growing ants.

Sharp jaws of the major worker are used not only for cutting leaves but also for defending the colony from vertebrate predators and foolish bug geeks. 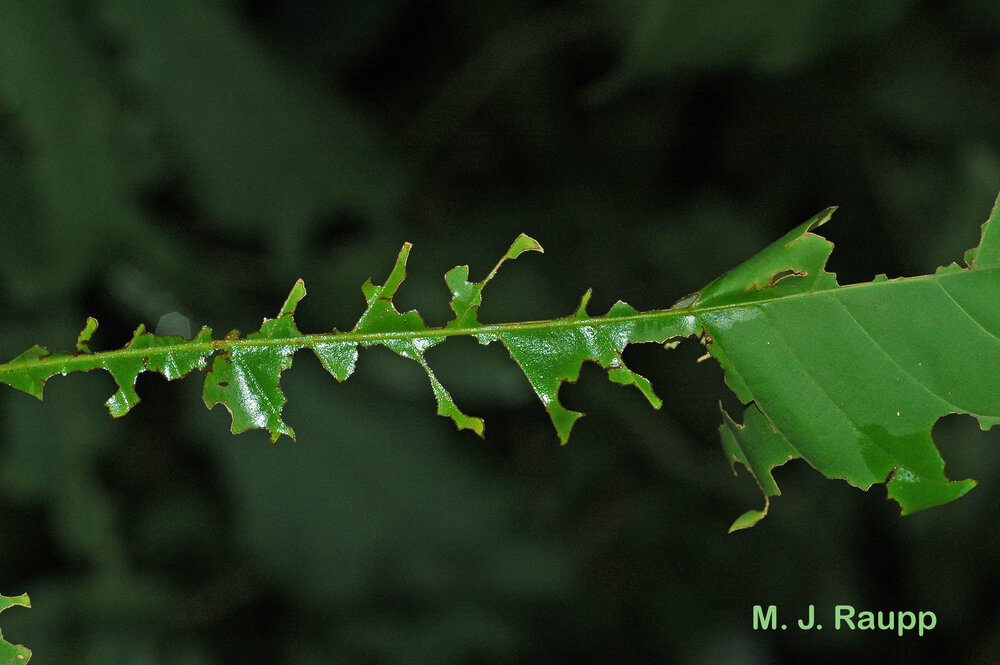 Leafcutters don’t leave much behind when defoliating favored plants.

To support their enormous colonies, leafcutters remove vast amounts of vegetation each day. It is estimated that large colonies may remove more than 500 dry weight pounds of vegetation annually. When nests are established near orchards or crops, leafcutters can strip trees and vegetables overnight, causing significant crop loss. Often, irate farmers destroy leafcutter colonies. One humorous account related by Hölldobler and Wilson of a westerner’s attempt to grow a European style vegetable garden in Belize reported that the gardener “… arose one morning and found our garden defoliated: every cabbage leaf was stripped…of the carrots nothing was seen…into a hole in the mound, ants, moving in quickened step, were carrying bits of our cabbage, tops of carrots, the beans – in fact our entire garden was going down that hole.” However, leafcutter ants play a vital role in recycling plant material and enriching and cultivating tropical soils. For millennia in tropical jungles throughout the New World, legions of leafcutters have been the consummate farmers in the rainforest.

Bug of the Week thanks Costa Rica Vacations and the intrepid guides Mono and Kenneth at Rafiki Lodge and Ale at Playa Cativo Lodge for providing the inspiration for this episode. The wonderful book “The Ants” by Bert Hölldobler and Edward O. Wilson was used as a reference.