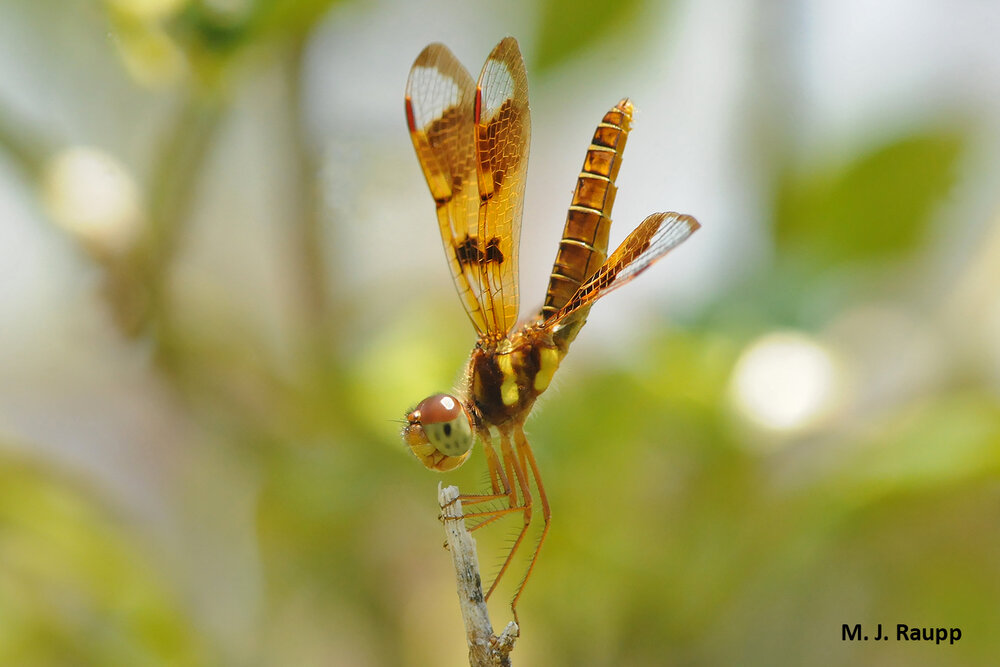 On hot days with brilliant sunshine a dragonfly may point its abdomen upward to reduce the surface area exposed to the sun.

This week we continue our adventures in the aquatic realm where we recently visited whirligig beetles and water striders. Now let’s meet some tiny dragons. Dragons are mythological beings common to many cultures. These fanciful and fearsome predators are often chimeras of several creatures with wings of a bat, head of a reptile, scales of a fish, feet of an eagle, or tail of a serpent. With enormous compound eyes, reticulate wings, long legs, and a snaky tail, dragon seems a fitting name for the insects we call dragonflies.

Dragonflies belong to a group of flying insects called the Anisoptera. The name Anisoptera comes from the Latin roots aniso- (meaning unequal) and –ptera (referring to wing). Anisoptera is a reference to the fact that the forewings of dragonflies are not nearly as wide as the hindwings. Dragonflies are an ancient clan. Those patrolling the skies 250 million years ago had wingspans of two and a half feet. Modern dragonflies are smaller but no less magnificent. They are active predators hunting and capturing prey while on the wing. Spiny legs held beneath the body in a basket-like arrangement trap victims. Small insects such as mosquitoes or crane flies are common snacks, but larger insects including bees, butterflies, and other dragonflies or damselflies may be captured. There are reports of large dragonflies catching hummingbirds.

On a chilly day in February it’s nice to think about a warm summer day when a dragonfly might choose a dragonfly ornament to perch upon amongst zinnias in my flowerbed. But dragonflies are fierce predators. Watch as a dragonfly devours a damsel in extreme distress – damselfly that is. 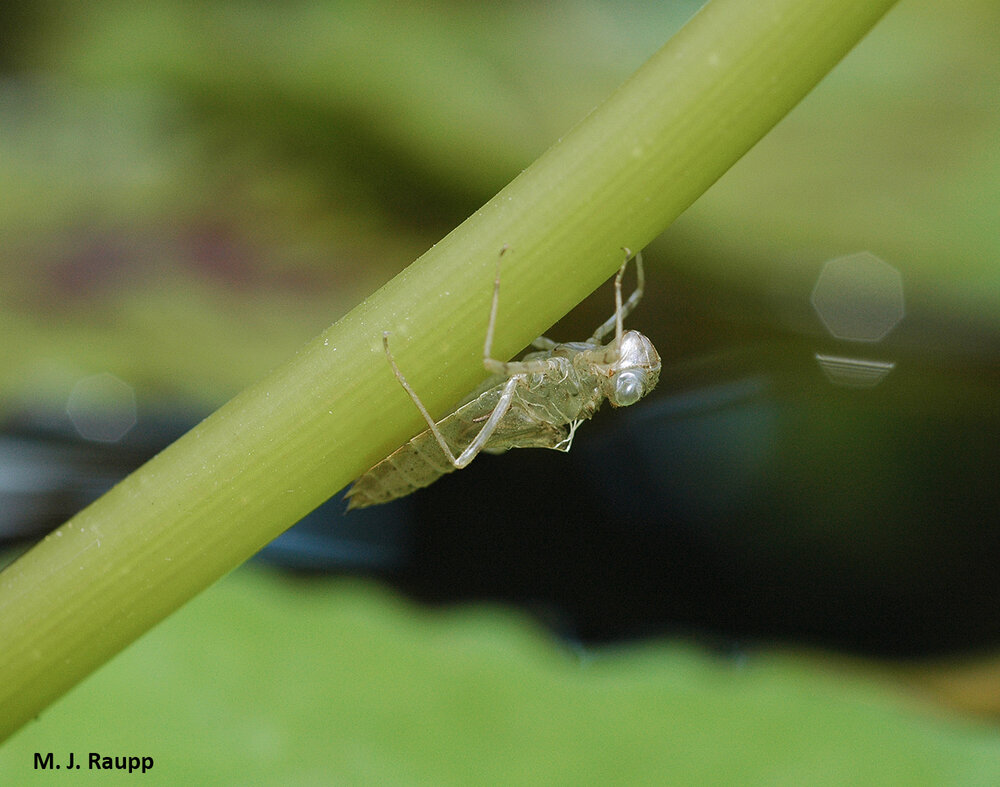 An empty shed skin attached to a stem is all that remains of a dragonfly’s life underwater.

Male dragonflies often patrol specific territories along ponds or streams on the lookout for food, potential mates, or other males. Other males entering a territory are pursued and driven away. Females are wooed and mating pairs of dragonflies are often seen flying in tandem. The male sometimes guards his mate while she deposits eggs in the water or on aquatic vegetation. Eggs hatch into fascinating submariners called nymphs. These beautiful swimmers live in ponds or streams obtaining oxygen from the water through gills found inside their anus. Muscular contractions allow the nymph to pump water in and out of its rear-end to breath. How curious!

Dragonfly nymphs capture many kinds of insects such as the larvae of aquatic beetles, midges, and mosquitoes. Yes, dragonfly nymphs are important predators that help hold mosquitoes at bay. Crustaceans, worms, tadpoles, and even small fish are fair game for these stealthy hunters. Dragonfly nymphs sit and wait for a potential meal to come near. When in range, a remarkable, hinged mouthpart snaps forward like a bullfrog’s tongue to ensnare the victim. Nymphs usually move about by crawling slowly. However, when startled or under attack, they expel a blast of water from their rear ends and are propelled forward like a jet. After molting several times and completing development, a nymph will climb out of the water and attach itself to a plant or stone. The nymphal skin splits and the adult dragonfly emerges. Once the exoskeleton has hardened, the daring aerialist will take wing to hunt, mate, and entertain lucky humans on a warm summer day.

The insect on the left with gills on its tail is a damselfly nymph. The insect more centered is a dragonfly nymph. Watch mosquito larvae disappear into the maw of the dragonfly nymph, captured by the lightning strike of the nymph’s hook-bearing mouth-parts. Clips at normal speed have been slowed by 85% to observe prey captures.

We thank Bill Lamp for providing the gorgeous dragonfly nymphs featured in this bug of the Week. Information was gleaned from “An Introduction to the Study of Insects” by D.J. Borer, D.M. De Long, and C.A. Triplehorn, “Beginner’s Guide to Dragonflies” by B. Nikula, J. Sones, D. Stokes and L. Stokes, and “Eco-Friendly Control of Mosquito Larvae by Brachytron pratense Nymph” by S.N. Chatterjee, A. Ghosh, and G. Chandra.