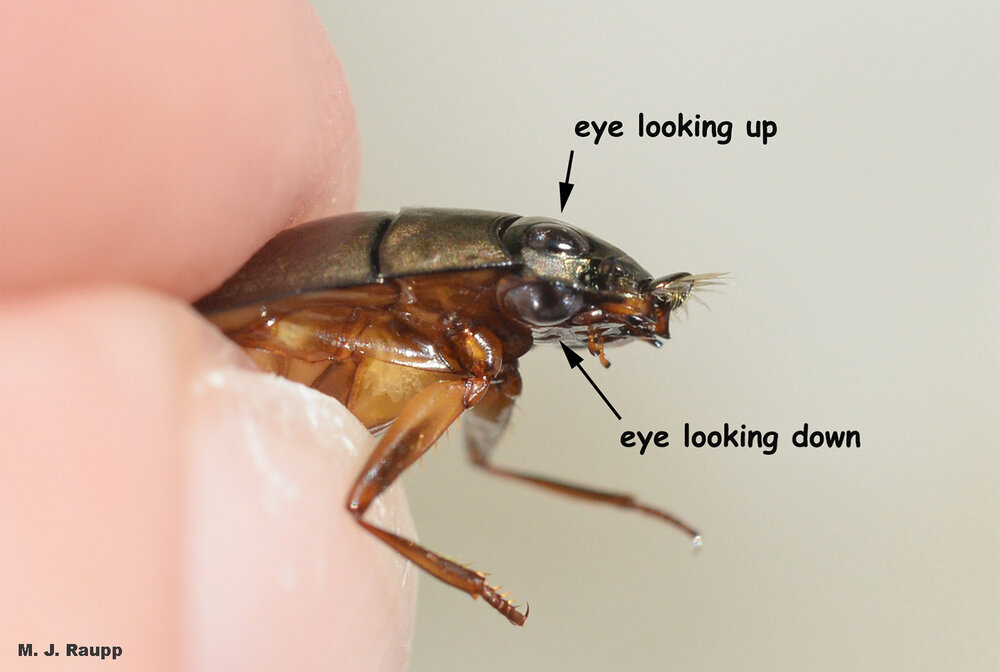 Viewed from the side you can see compound eyes of the whirligig beetle, one looking up, another looking down. Two on the right and two on the left make four. But the question is why?

Having crossed the optical threshold of unaided vision many years ago, I find having four eyes – that is, wearing glasses – to be incredibly useful, especially when trying to observe the antics of very small creatures like insects. In this week’s episode we meet a fascinating beetle with four eyes. No, it doesn’t wear glasses, although that would be pretty funny, but it really does have four eyes. Beetles in the family Gyrinidae, commonly known as whirligig beetles, live the life aquatic at the interface between the world of air and sunlight and the world of swirling water. The name whirligig stems from their habit of swimming rapidly and changing direction frequently, often in circular patterns.  Some observers comment that these beetles seem to gyrate on the water’s surface.

Life at the interface of two worlds, one of air and the other of water, presents interesting challenges. One challenge of course is the very different way light passes through water compared to its passage through air, and how this difference affects vision. Many of us have had the interesting experience of observing aquatic creatures underwater at an aquarium or through the lens of a dive mask. You’ve seen that objects appear significantly larger underwater than when viewed in air. This phenomenon results from water refracting or bending light as it moves through water, making objects appear about one third larger than they actually are. Imagine the dilemma of a surface dwelling insect faced with the prospects of attempting to keep an eye open for predatory fish lurking below while simultaneously monitoring for hungry birds ready to pounce from above. Whirligig beetle have a unique solution to this visual dilemma. They have evolved two unique sets of eyes, one pair gazing upward above the water’s surface, one downward-looking pair immersed in the water below.

Sneaking up on a raft of whirligigs plying the gentle currents of the Gunpowder River, the beetles appear orderly and intent on holding their place in the current. But with a quick wave of my hand, whirligigs quickly shift into the swirling, dizzying, pandemonium from which they gain their name and possibly avoid the jaws of predators.

Upward-looking eyes are covered with a maze of incredibly tiny features called nanostructures that enhance their ability to sense wavelengths of light in the visual range. Downward-facing eyes that peer into the relative gloom below the surface lack these nanostructures. Separate nerve centers in the beetle’s tiny brain receive visual information from both pairs of eyes, integrate this information, and use it to hunt prey, find mates, and avoid predators. It is difficult for a binocular animal like me to even imagine what all of this must look like. Amazing!

The rapid, swirling movements of whirligigs are thought to help confound visually hunting predators. Whirligigs have yet another defense against their aquatic enemies, this one a nasty tasting chemical called gyrinidal produced by glands in their abdomen. When offered whirligig beetles as a snack, largemouth bass rejected them. Crazy swirly swimming, noxious chemical defenses, and four compound eyes, these are the special powers needed for whirligig beetles to survive at the interface of air and water.