This week Bug of the Week continues its peregrination south of the equator. Let’s head north from Villarrica volcano in Chile some 2,000 miles to the western Amazon Basin for a visit with ridiculously beautiful beetles in the rainforests surrounding the Tambopata River. These forests, some of the most diverse on the planet, receive more than 90 inches of rainfall annually. As you might expect, the massive turnover of vegetation coupled with abundant rainfall, heat, and humidity provide superb conditions for the growth of fungi. Thousands of species of fungi call the rainforest home. As fungi play an important role in recycling refractory plant materials like cellulose and lignin, they in turn provide food for a diverse horde of hungry insects. Among the most spectacular of these insects are beetles belonging to the Erotylidae clan, the pleasing fungus beetles. Pleasing fungus beetles are a large and diverse group of insects found in many parts of the world, including here in Maryland. A subset of pleasing fungus beetles known as lizard beetles are plant feeders. Those that bore into stems of legumes are considered pests. The beauties featured in this episode are members of the genera Erotylus and Gibbifer, consumers of fungi as both larvae and adults. Indigenous folks of the Tambopata call the gorgeous black, yellow, and red striped Erotylus, “ladybeetle”, a term we reserve for members of the Coccinellidae family. This dazzling beetle is also known as the zig-zag beetle. It’s funny how common names of insects mean different things in different places. 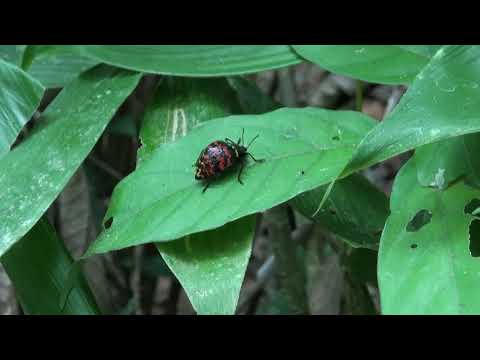 Natural wonders await discovery in rainforests along tributaries of the mighty Amazon. Brilliant contrasting colors backed by chemical defenses likely enable this delightful Erotylus beetle, sometimes known as the zig-zag beetle, to move about in broad daylight with impunity. Grooming one’s body seems to be an important pastime for these beetles.

The stunning coloration of these beetles is thought to be aposematic, distinctive coloration meant to send a warning of distastefulness to predators, in much the same way the orange and black colors of monarch butterflies and milkweed leaf beetles warn birds not to mess with them. Many species of beetles, including pleasing fungus beetles and lady beetles, can release blood from their joints and other apertures in a behavior known as reflex bleeding. A recent study of pleasing fungus beetles in Germany found a veritable witches brew of aromatic compounds – alkenes, ketones, acids, and yet unknown compounds – released as secretions from glands and in the blood of adult beetles. Several components found in the secretions and blood of the pleasing fungus beetle were repellent to an important group of predators – ants, rulers of the forest floor. These compounds also have significant antimicrobial activity, a handy defense in a microbe-packed rainforest. Although the deep rainforest is sometimes dark and dank, discovery of pleasing fungus beetles, recyclers of plant recyclers is always an illuminating experience.

Bug of the Week thanks the crew of the Posada Amazonas for providing the inspiration for this episode. Two interesting articles “First insights into the chemical defensive system of the erotylid beetle, Tritoma bipustulata” by Kai Drilling and Konrad Dettner, and “Beetles (Coleoptera) of Peru: A Survey of the Families. Erotylidae Latreille, 1802” by Joseph V. McHugh and Caroline S. Chaboo were used to prepare this episode.