No, this week’s episode is not a revival of the classic Costner- meets-Houston romance, but it is a story about a different type of symbiotic relationship as curious as a previous episode where we met leafcutter ants and their fungus gardens. This week we explore the fascinating relationship between tropical myrmecophytes, plants that partner with ants, and the feisty ants which serve as their bodyguards. Whether it’s in the rainforest of Belize or those in Costa Rica, one common sight at the forest’s edge is a brilliant green acacia tree. At one such site a local guide noted that this remarkable tree was completely unmolested by any type of leaf-munching caterpillar, sucking insect, or large mammal such as the horses or cows that grazed in a pasture nearby. A closer inspection revealed fearsome looking thorns arising from nodes of the branches. Surely these thorns, locally known as cockspurs or bullhorns, helped explain why large grazing mammals avoided the otherwise delectable looking leaves of the acacia. A mouthful of thorns would be a painful experience indeed. However, as I fondled the foliage of the acacia, I was instantly attacked by a furious band of ants that bit and stung my hand with extreme prejudice. Their sting was memorable and my swollen hand throbbed and itched for hours after the encounter.

Under normal conditions acacia ants patrol leaves and stems at a languid pace. But the pace quickens as workers begin their search-and-attack mode after I rustle the acacia’s branches. Along the trunk, a frenzied mob seeks the source of the disturbance. A momentary touch of a branch is long enough for the bodyguards to attack the nosy human and deliver fierce bites and stings. 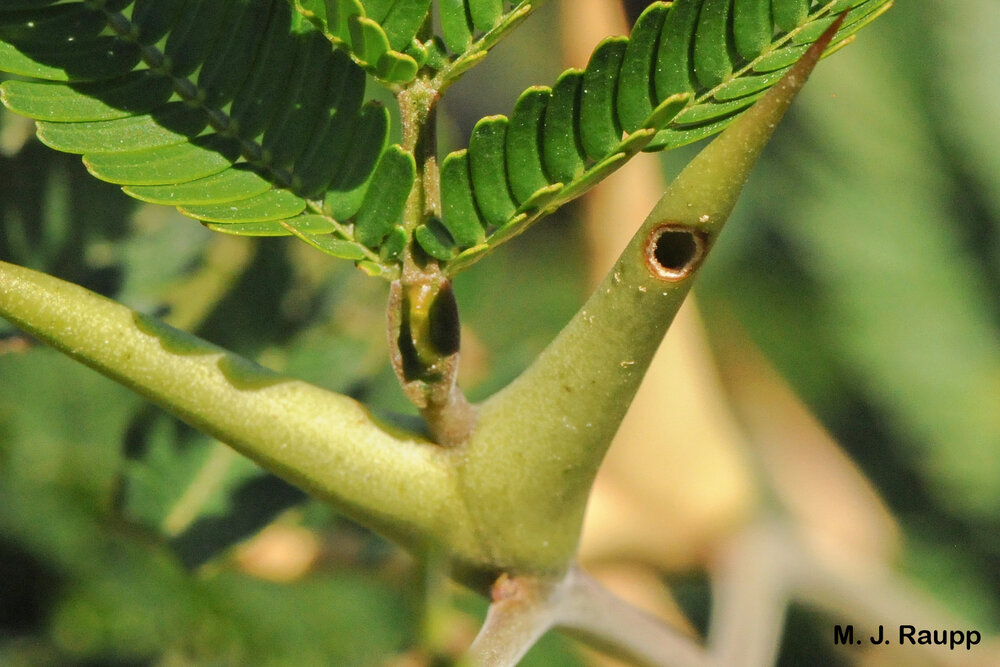 Small holes in the thorn allow ants to enter and exit.

The secret weapons of the bullhorn acacia are ant bodyguards, part of a symbiotic deal struck eons ago by acacias and ants in the genus Pseudomyrmex. The deal works like this: A newly mated Pseudomyrmex queen lands on the bullhorn acacia and locates a large thorn. Either by chewing a new hole or by using an existing one, she enters the hollow thorn and lays eggs. Eggs hatch and develop into sterile workers. Workers, the queen, and subsequent broods subsist on carbohydrate rich nectar produced by specialized glands called extrafloral nectaries found near the bases of many leaves. But ants, like humans, cannot live by sugar alone. At the tips of some leaves, specialized structures called Beltian bodies form. These detachable tidbits are rich in nutrients including proteins and lipids. Ants harvest and consume Beltian bodies to round out their diet. By providing room and board, acacia plays the generous host for Pseudomyrmex. In return, fearless worker ants provide maniacal protection of the acacia from caterpillars, sap-sucking insects, probably large herbivores, and, certainly, nosey entomologists. 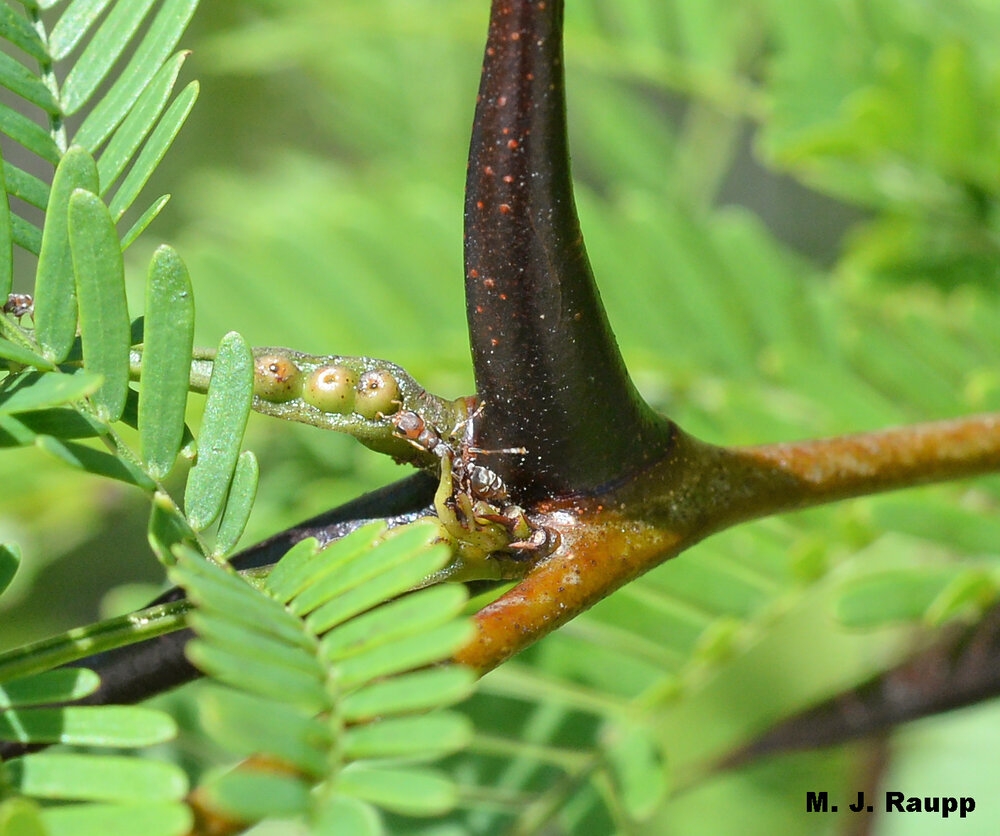 Nectaries at the base of the leaf’s petiole provide a rich source of energy for busy ants.

One additional benefit of the bodyguards is their role as vegetation managers. In addition to being devoid of leaf-eating insects, choking vines that ascended and engulfed other rainforest plants nearby were notably missing from the acacia. Why were so many other plants cloaked in vegetation while the acacia remained free of clinging vines? In a clever series of studies, rainforest guru Dan Janzen demonstrated that in addition to protecting acacias from herbivores, Pseudomyrmex also aggressively remove tender tips of encroaching plants that might compete with acacia for sunlight. Room and board in exchange for protection from herbivores and competing plants, all deals should be so good!

We thank the hearty crew of ‘BSCI 339M, Mayan Culture and the Interface Between Tropical Rainforests and Coral Reefs, Costa Rica Vacations, and the intrepid guides Mono and Kenneth at Rafiki Lodge and Ale and Gera at Playa Cativo Lodge, for providing the inspiration for this episode.  The wonderful book “The Insect Societies” by Edward O. Wilson and the fascinating articles “Interaction of the bull’s-horn acacia (Acacia cornigera L.) with an ant inhabitant (Pseudomyrmex ferruginea F. Smith) in Eastern Mexico” and “Coevolution of mutualism between ants and acacias in Central America” by Dan Janzen were used as references for this episode.