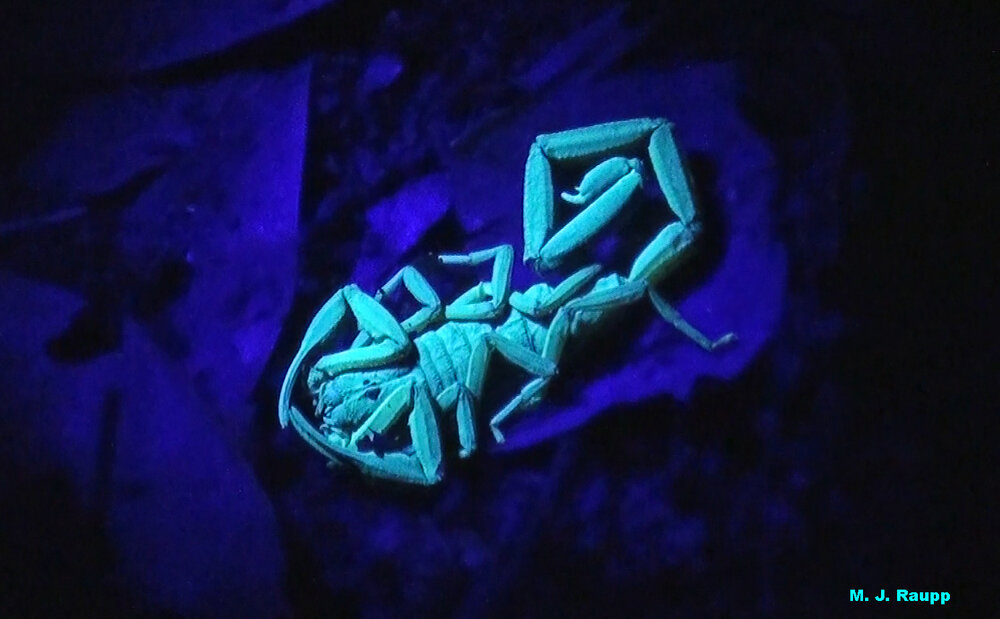 Like psychedelic posters from the 60’s, rockin’ tropical scorpions glow beneath the beams of a blacklight.

One delightful adventure not to be missed is a nocturnal foray into the heart of a tropical rainforest. This escapade can produce memorable encounters with whip scorpions, large tarantulas, and giant katydids like those we met in previous episodes. During one such foray in Costa Rica, I was surprised to see a beautiful blue-green scorpion resting on the ground when a trail guide moved a fallen leaf and cast the beam of a blacklight near the path. Being a child of the 60’s, I was instinctively struck to understand what my blacklight posters shared with this stinging eight-legged rainforest predator. It turns out that blacklight posters contain compounds, phosphors, capable of capturing the high energy photons of UV light and releasing their energy in longer and less energetic forms of visible light, producing dazzling, glowing hues. Scorpion glow results when UV light is captured by two compounds, beta-carboline and 4-methyl-7-hydroxycoumarin, found in the scorpion’s exoskeleton. Once captured, UV’s energy is released in the form of eerie blue-green florescence.

A scorpion is revealed amongst leaves on the rainforest floor as it fluoresces bluish-green when illuminated by rays of a blacklight.

In a series of clever studies, Dr. Douglas Gaffin and his colleagues discovered that the scorpion’s entire body may act as a photoreceptor or universal “eye” used to detect different levels of light. Light in the UV range directed at scorpions produced bouts of rapid movement. These researchers suggested that the scorpion’s whole-body “eye” might help it move to places where light no longer illuminates its body, such as locations beneath vegetation where the searching eyes of larger predators were less likely to spot it. Whole-body photoreceptors might also be used by scorpions to detect the waning light levels of twilight, the signal to exit burrows and start their nocturnal hunt for prey. 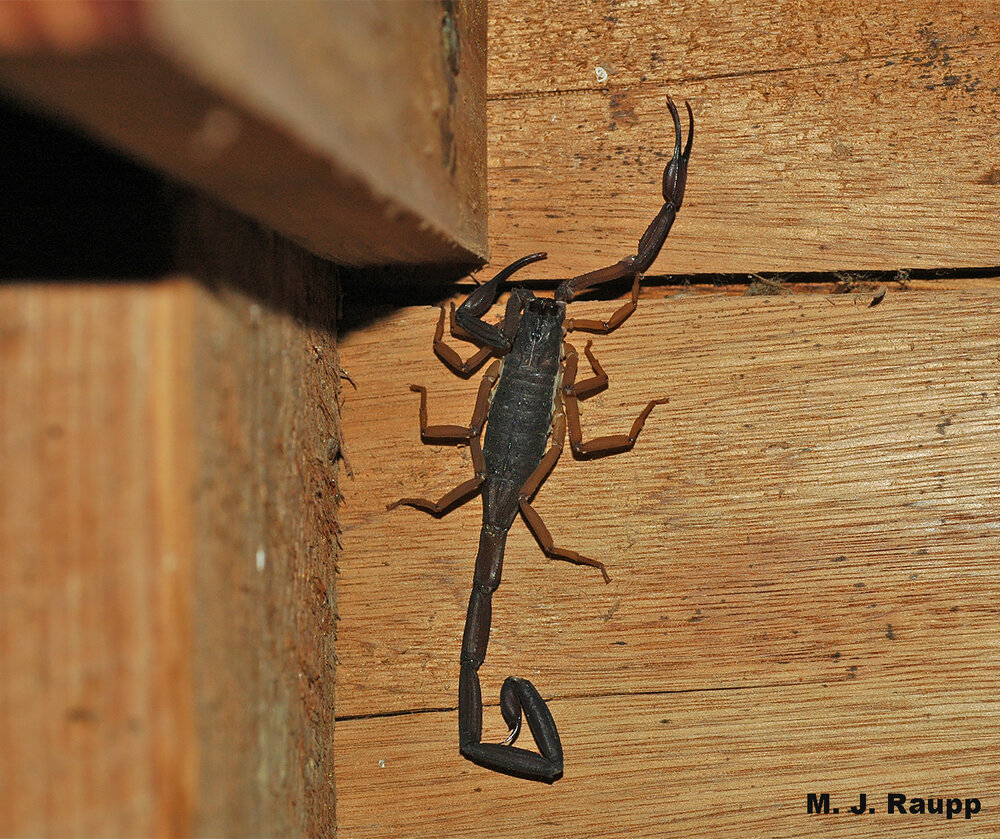 Who’s that lurking in the corner of the bed frame? And is that another wedged in the crack above?

On another tropical adventure in the rainforests of Belize I had the good fortune to encounter scorpions in a somewhat different context. After a long day of feeding mosquitoes and avoiding crocodiles with a group of students on a study abroad, the prospects of enjoying a little shut-eye in the bunkhouse was most appealing. Unfortunately, one student climbed into his lower bunk bed and was surprised to see a rather impressive scorpion beneath the mattress of the upper bed just a few inches above his head. In Belize, the solitude of bedtime is often punctuated by colorful and enthusiastic expletives describing the creatures found in cabins. The exciting Slenderbrown scorpion, like the one encountered by our student, is a regular visitor to cabins and outhouses at night, and goes by many names including the Slenderbrown, Brown Bark Scorpion, or Alacran azul. In the wild, I have seen it beneath loose bark and under logs. This scorpion is found in Central and South America, the Caribbean, and southern Florida. 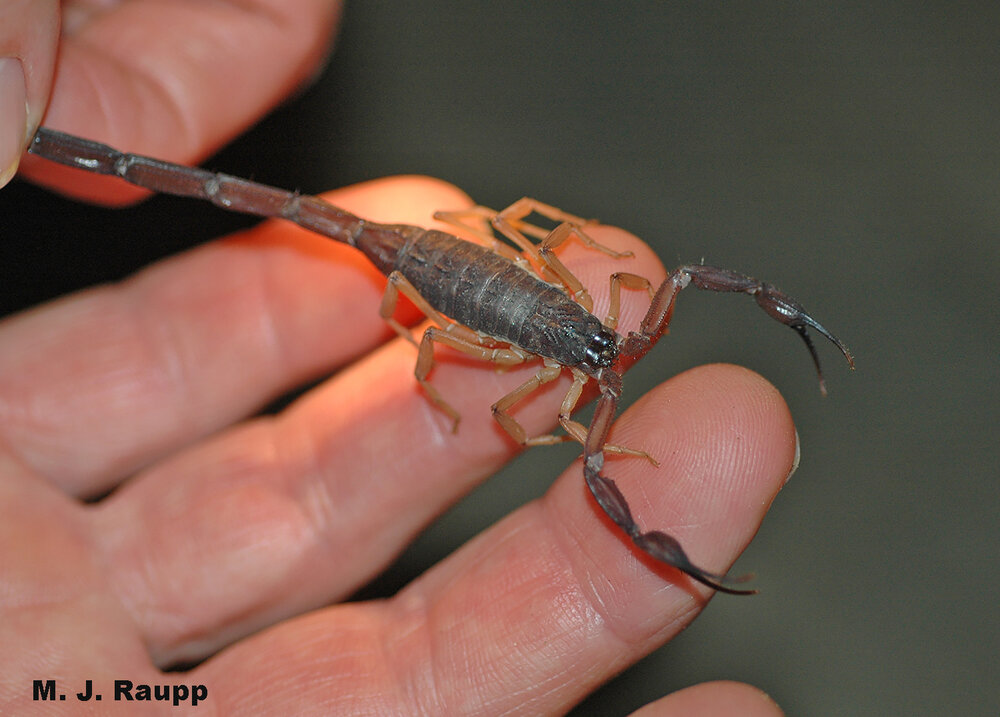 Scary pinchers, or pedipalps, are used to capture prey. 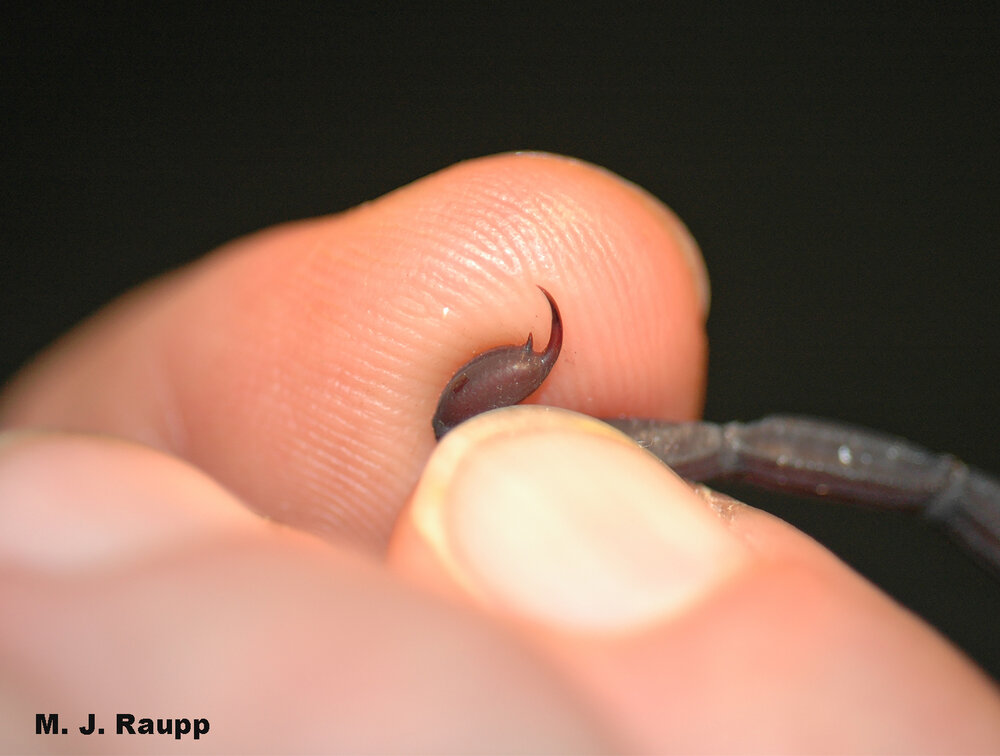 If this sting gets you, you will be sending out an SOS to the world.

Scorpions are not insects. They belong to another part of the arthropod clan called arachnids and are relatives of spiders and ticks. The scary pinchers on the front end of the scorpion are its pedipalps. They are used for grasping and dismembering insects and spiders that comprise most of the scorpion’s meals.

The business end of the scorpion is the sting, an enlarged segment at the end of the scorpion’s tail that contains a venom gland and a needle-like poker to deliver the poison. The sting is used to immobilize and kill prey and also as a means of defense against larger animals. When scurrying across a floor or ceiling, the scorpion’s sting is often curled up and over its back. Scorpions move surprisingly fast. The venom of the Slenderbrown scorpion carries a punch similar in pain to the sting of a honeybee or yellow jacket and is not generally life threatening. However, some relatives of the Slenderbrown scorpion, including those in the genus Tityus, are very dangerous and their venom can be fatal to humans. One courageous and somewhat impulsive student tested the potency of the Slenderbrown’s sting when she grabbed a scorpion lurking over her bunk and was stung. She summarily hurled said scorpion out the door of her cabin. Her assessment of the experience: “It only hurt a little and that thing was really annoying me”. You go girl!

Many thanks to Dr. Jeff Shultz for an enlightening discussion about scorpion glow. The fascinating article “Scorpion fluorescence and reaction to light” by Douglas D. Gaffin, Lloyd A. Bumm, Matthew S. Taylor, Nataliya V. Popokina, and Shivani Manna provided much background information for this episode. Thanks also to Matt Tabisz for wrangling the scorpion in this Bug of the Week.