Upside and downside of a warming world for the despoiler of hemlocks: Hemlock woolly adelgid, Adelges tsugae 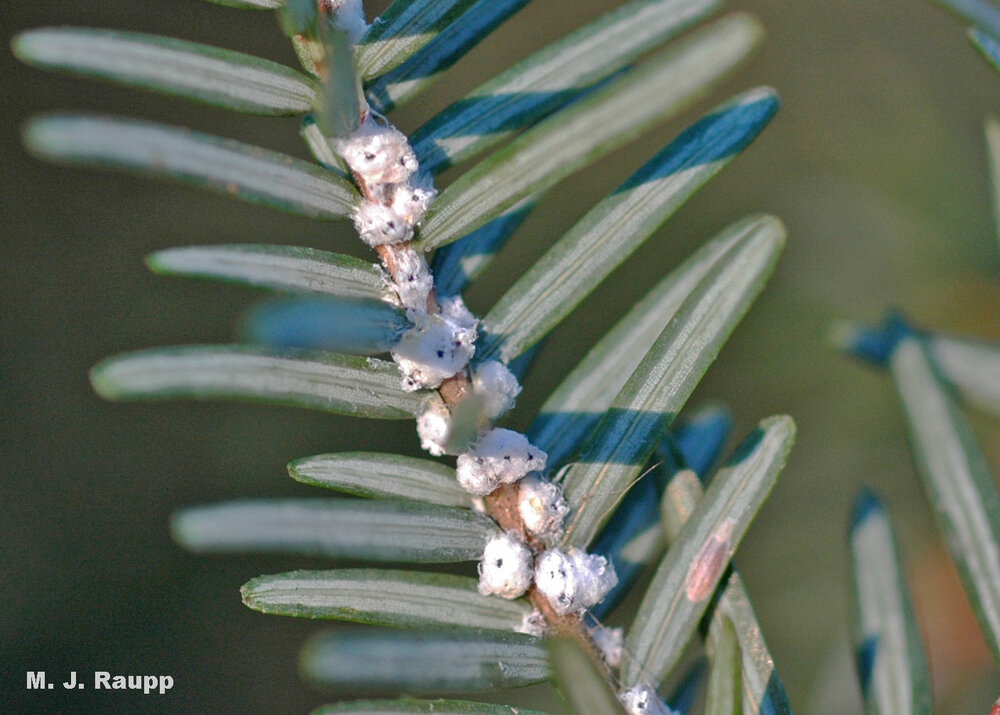 White bundles of fluffy wax are a sure sign of a woolly adelgid infestation on hemlocks. 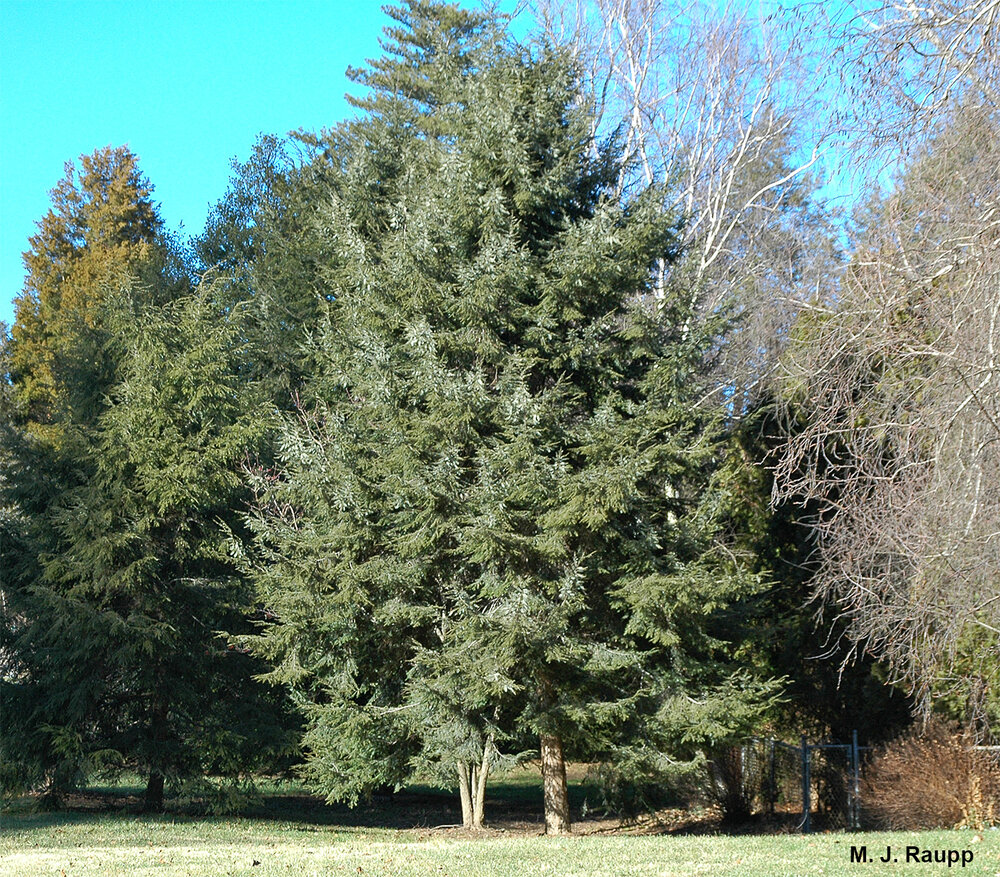 Eastern hemlock is a wonderful tree native to North America, found in the wild stretching from the shores of the Chesapeake to the Blue Ridge Mountains and beyond. In neighborhoods it graces landscapes as an evergreen specimen or screen along property lines. More than six decades ago, the hemlock woolly adelgid, a dastardly sucking insect akin to an aphid, appeared near Richmond, Virginia. It likely entered this country on infested nursery stock from Japan. For many years this pest made its presence known mostly in home landscapes and parks, where it often disfigured and sometimes killed hemlocks. As it spread to the Appalachian Mountains, it killed thousands of eastern hemlocks in the Shenandoah, Blue Ridge, and Smokey mountains. A recent study estimated government and household expenditures to control hemlock woolly adelgid and lost property values when hemlocks died exceed $214 million annually in the United States. From Maine to Georgia this pest threatens eastern hemlock in the north and its rarer cousin, the Carolina hemlock, in the south. 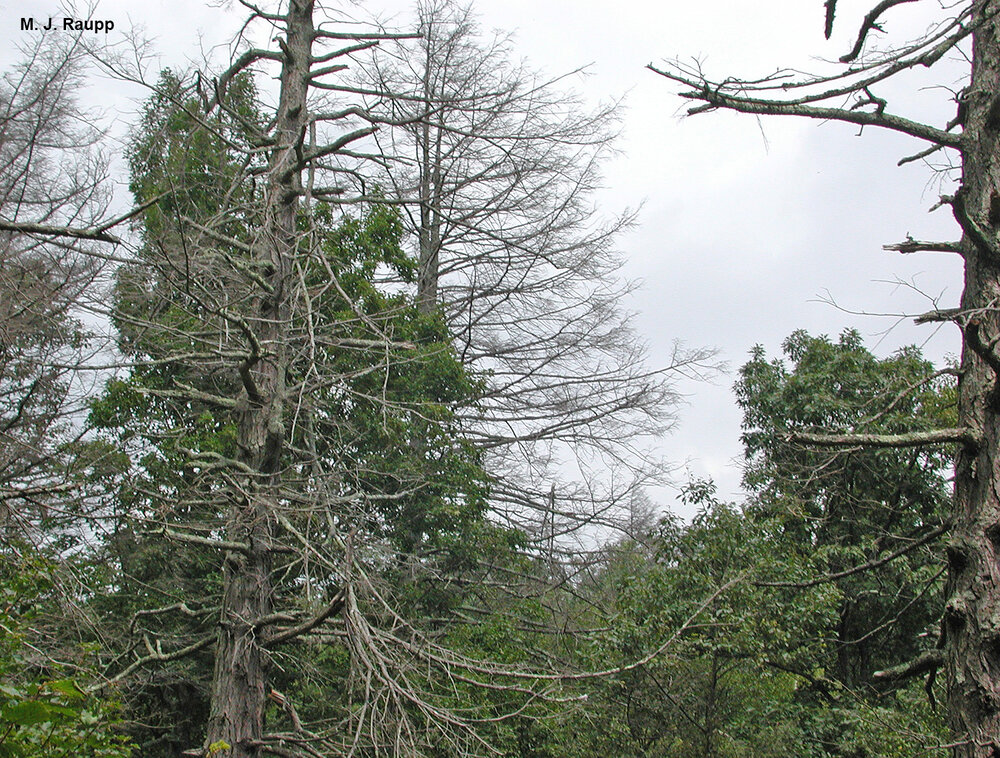 The hemlock woolly adelgid has killed thousands of eastern hemlocks throughout natural and managed landscapes in eastern North America.

This mini-monster spends most of the summer and early autumn hunkered down as an inconspicuous immature stage, called a nymph, on the bark of the hemlock near the base of needles. When the cold winds of winter blow in late October and November, the nymphs resume development and mature in mid-winter. Currently in my neighborhood this process is underway, with adelgids producing large amounts of white, woolly wax from which the woolly adelgid takes its name. The waxy cover provides protection for the adelgid and for eggs she will lay in the woolly sac in late winter. Between March and June, a second generation of adelgids will hatch out and mature, and then the cycle begins again with females producing the next batch of nymphs that will summer on hemlock twigs. Excepting the summer season of dormancy, developing nymphs and egg-laying females feed by inserting hypodermic-like mouthparts through the bark of twigs. The long, sucking mouthparts search along the tree’s vascular system and eventually find specialized tissues called parenchyma cells of the xylem rays. The mouthparts are inserted into parenchyma cells and the adelgid greedily robs the tree of its stored nutrients. Heavily infested trees decline in vigor, turn a sickly grayish – green color, lose their needles, and may die in five to ten years, if adelgids are not controlled.

What lies beneath the wax? Wax on reveals little, but wax off reveals wiggling legs and rows of wax-producing pores lining the underside of the bizarre looking immature adelgid.

We have painted a picture of the adelgid as a despicable pest very much accustomed to thriving in winter’s cold in many parts of the eastern United States. As the world warms, scientists fear the range of the adelgid will expand dramatically to many northern reaches in the United States and southern Canada. In these chilly lands, the adelgids’ hemlock hosts are currently protected by frigid winter temperatures lethal to the overwintering stages of the adelgid. As the world warms, this thermal refuge for hemlocks is in jeopardy. But there seems to be an upside related to the warming of our world with respect to the current geographic range of the hemlock woolly adelgid. Recently, scientists have discovered that in the southernmost lands invaded by the adelgid, the hemlock forests of Georgia, summer temperatures have become hot enough to significantly reduce the survival of the adelgid on imperiled hemlocks, particularly those at warmer low elevations. While a warmer world may open the door for the adelgid’s continued northward march, perhaps the same phenomenon will close the door to its persistence in the south. Only time will tell.