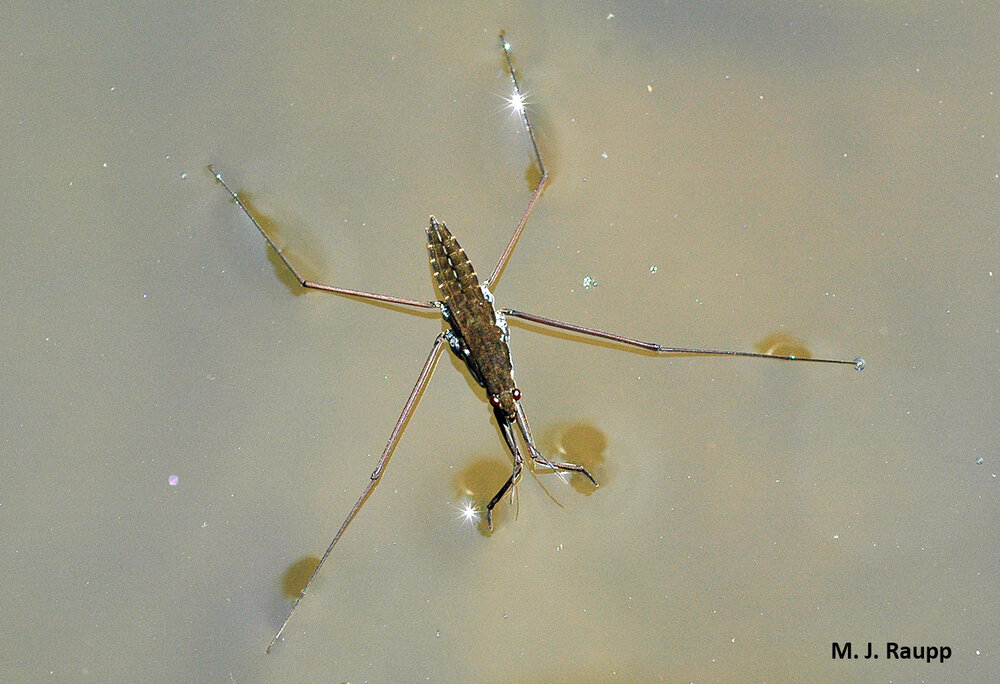 What forces and clever adaptations enable water striders to literally walk on water?

Last week we visited whirligig beetles and learned their secrets of living at the intersection of water and air. This week we return to the water to visit another member of the neuston, the interesting community of organisms that spend their lives on or near the surface of water. Gerrids go by a number of colorful common names including water striders, pond skaters, and Jesus bugs owing to their remarkable ability to walk just a few millimeters above the water’s surface. One fine autumn afternoon along a gentle stream in the Blue Ridge Mountains I happened upon a nice collection of water striders scooting across the surface of a small pool. Water striders are predatory members of the true bug clan that includes terrestrial predators such as wheel bugs and spined soldier bugs we met in previous episodes. These aquatic predators dine on small insects and other arthropods, either living or dead, whose fortunes deposit them on the water’s surface. Powerful jaws are used to penetrate the exoskeleton of a victim while needle-like stylets inject proteolytic enzymes to
liquefy internal structures of the prey. A pump in the head of the water strider sucks the nutrient-rich liquid into the predator’s digestive tract. Yum.

The majority of water striders are denizens of fresh water but a few live in brackish waters or truly saline waters of the ocean. As a group, they have evolved remarkably clever strategies for dealing with the uncertainties of aquatic life. Those utilizing large permanent water sources like lakes may lack wings entirely and forgo the ability to fly, putting their bodily resources into reproduction rather than mobility. Others found in temporary water sources often have winged individuals capable of escaping vanishing pools and colonizing new water-filled ones.

Small dimples in the water caused by cohesion of water molecules beneath each of six widely spread
legs distribute the strider’s weight, enabling it to stand and zoom across the surface without sinking.

Perhaps the most interesting aspect of water strider life is the unique ability to walk on the water’s surface. Here’s how they do it. The body of the water strider is covered with thousands upon thousands of fine hairs. The larger of these dense hairs covering the body repel water, keeping the strider from becoming water-logged and sinking when splashed or submerged by a tiny wave or pelted by raindrops in a downpour. The real magic comes by way of tiny microhairs found at the tips of the water striders legs. These can number more than a thousand hairs per square millimeter. By distributing its weight across six legs, each with water repellent hairs, the water strider takes advantage of the cohesive force of water molecules. Water molecules
simply stick together due to the attraction of one charged molecule to another. This cohesion causes the water to form small depressions beneath each leg as it bears the weight of the insect. To move forward, the water strider shifts minute amounts of weight to one of the middle legs and then pushes against the back wall of the depression thereby propelling itself forward. By alternating movements of the middle legs, steering with the hind legs, and carefully distributing its weight among all legs, the strider walks on water. One can only imagine what fun could be had if we had skates or shoes to exploit the cohesive force of water molecules.