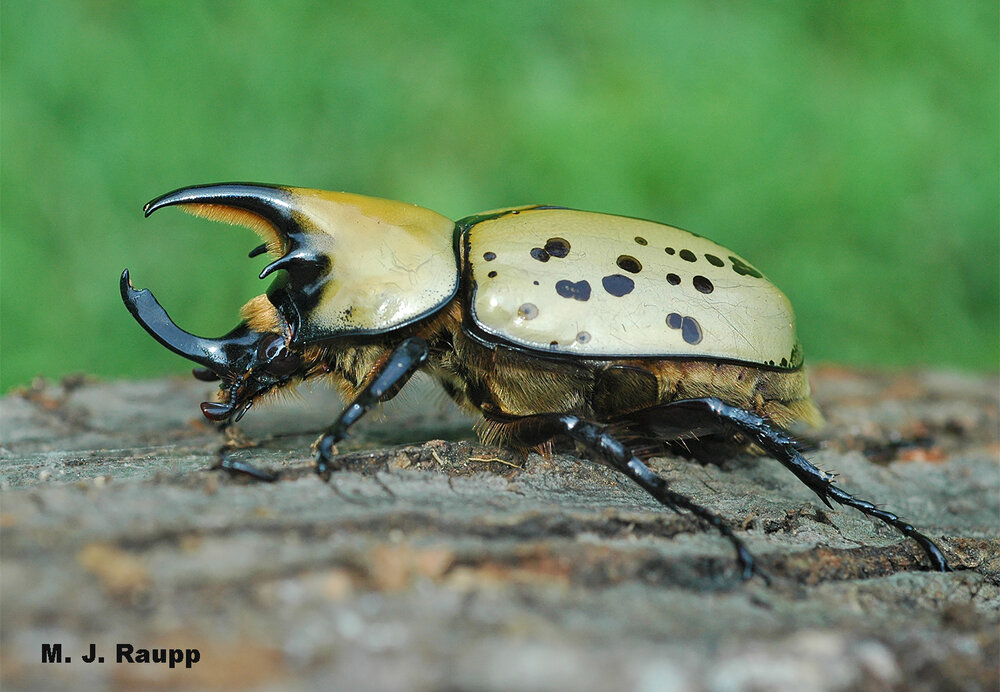 Rhinoceros beetles like this male Hercules beetle use their impressive horns to battle each other for access to mates. 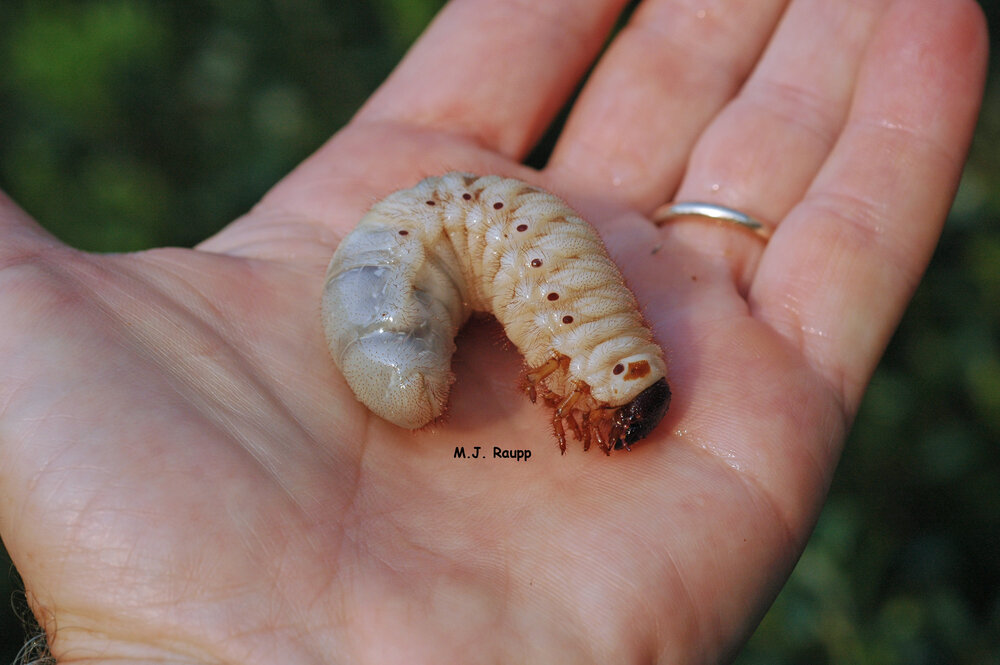 Fully grown grubs of the Hercules beetle are prime tucker for bears, raccoons, and other wildlife.

In Roman mythology, Hercules was a hero of remarkable strength and courage renowned for performing amazing feats such as slaying the 9-headed water beast called the Lernaean Hydra, exterminating man-eating birds, and cleaning a mighty big stable in a single day by rerouting two rivers to flush away the filth. Sometime ago one of our former students happened across several extraordinarily large beetle grubs, named for this mythological hero, in a hollow of a decaying cherry tree. Nearby, a rambunctious male Hercules beetle did his best to win the affections of an adorable female beetle, but unfortunately to no avail.

Clearly this lass wants no part of the amorous male. The hapless suitor can only watch as she disappears beneath the mulch, the ultimate rejection! 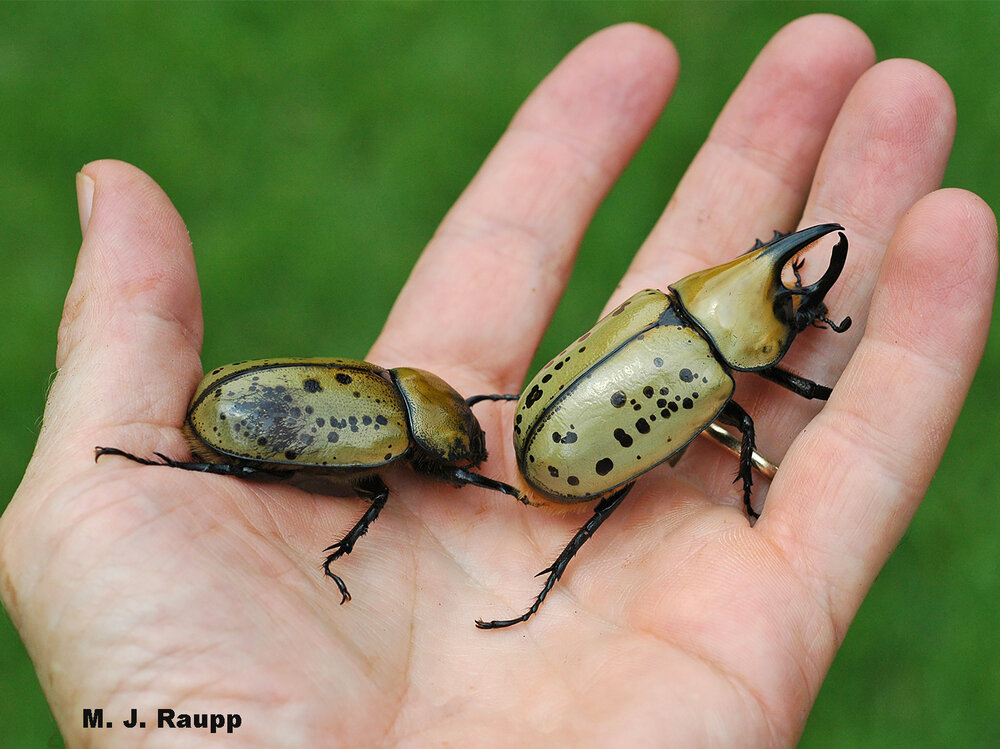 Here in the DMV, native male and female Hercules beetles, a type of rhinoceros beetle, can be held in one hand.

The Hercules beetle is the largest beetle found in eastern North America. Like its namesake, this beetle is crazy strong. When placed in a terrarium with a tightly fitting lid on my kitchen counter, the male Hercules beetle easily lifted the lid, climbed out, and went for a stroll around my home. Our local Hercules beetle belongs to a family called the Scarabaeidae, which includes pests such as the Japanese beetle and Oriental beetle we met in previous episodes. By virtue of the exceptionally long horns found on the males, these scarabs are also fondly called rhinoceros beetles. Some male rhinoceros beetles in the tropics have exceptionally long horns, used to wage war with other males as they vie for the right to mate. Battles consist of males challenging each other with a series of squeaking sounds. This may be followed by a tussle involving dueling with horns. The winner usually gets the gal and the loser retreats, sometimes with more than his pride wounded. 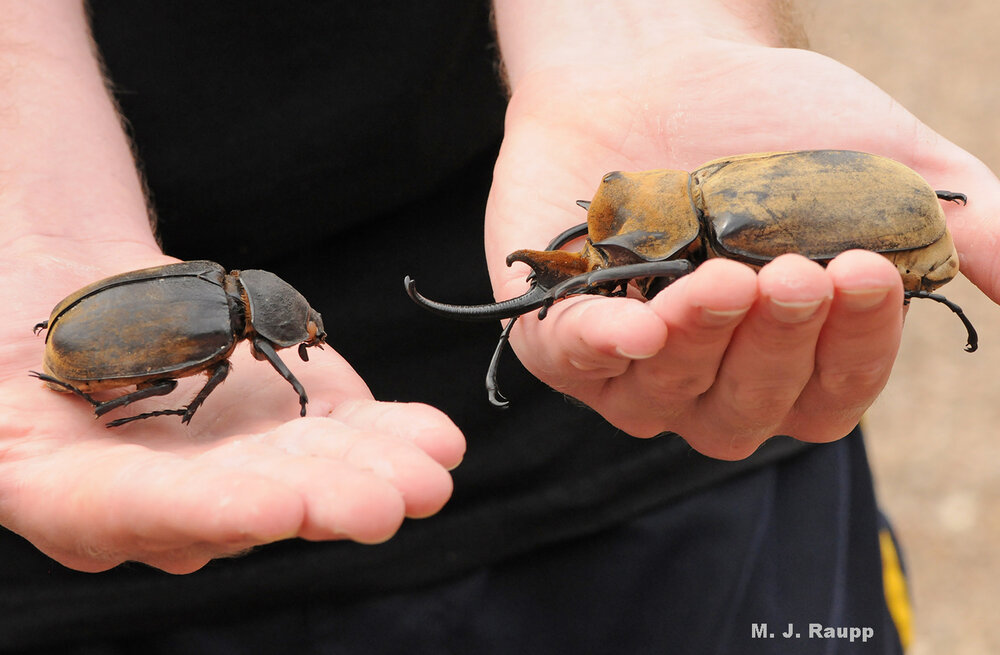 But in Belize, it takes two hands to hold magnificent female and male rhinoceros beetles.

In the wild, the main food of adult beetles is the sap of trees and fruit. Beetles create a sap-flow by scraping away tender bark of the tree. In captivity, adult Hercules beetles eat fresh and rotting fruit including apples, oranges, cherries, and bananas. Adult beetles live several months and lay rather large eggs in rotting wood of hollow or fallen trees. Larvae may require 12 to 18 months to complete development, attaining a size of roughly two inches in length. The larvae, called grubs, consume decomposing wood and organic matter. They change to pupae from which emerge new adults.

These guys make interesting pets and are fairly easy to rear. The website listed below contains instructions for the culture and care of these creatures. Unfortunately, Hercules beetles are attracted to lights and they sometimes appear at porch lamps or in illuminated parking lots, where they are eaten by predators or killed by humans. Although these very large beetles appear scary, they are harmless to humans. If you see one or encounter the grubs, enjoy them and return them to the wild unharmed. They are important recyclers of nutrients locked-up in wood and one of Mother Nature’s most fantastic creations.

After being exposed by a meddlesome hand, a bashful Hercules beetle grub dives into the substrate to avoid the inquisitive lens of the paparazzi. Grub entering soil filmed at seven times actual speed.

Special thanks to Ellery and Erik for sharing their family of Hercules beetles with Bug of the Week. To learn more about the biology and ecology of rhinoceros beetles and how you can raise them, please visit the following website: https://www.uky.edu/Ag/CritterFiles/casefile/insects/beetles/hercules/hercules.htm#ecology