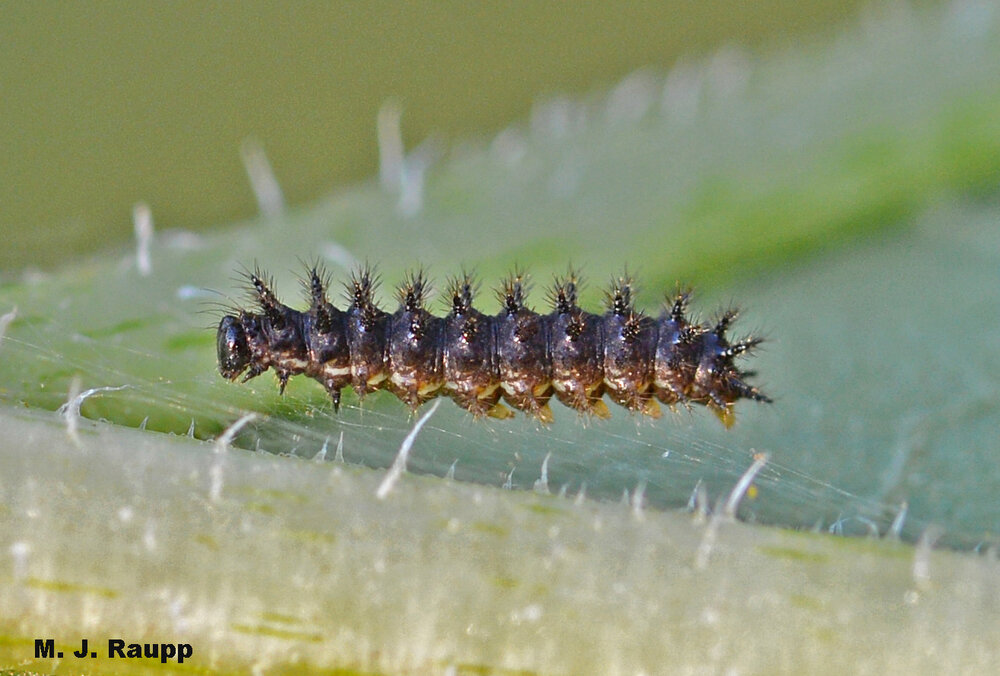 A tiny silvery checkerspot caterpillar glides across the leaf’s surface on delicate strands of silk.

One of the real pleasures of spring is to buy a packet of sunflower seeds, plant them in the soil, and see what develops over the course of the growing season. Having selected a packet marked dwarf sunflowers, we germinated the seeds, grew potted seedlings, and installed them in a front flower bed with expectations of pretty sunflowers just tall enough for close observation at eye-level for children and adults. Little did we know that by the end of August, these sunflowers would exceed ten feet in height, dwarves only for exceedingly large humans or small giants. Fortunately, sunflowers and other members of the aster clan turn out to be excellent hosts for the wonderful silvery checkerspot butterfly, close cousin to the Baltimore checkerspot, state insect of Maryland. 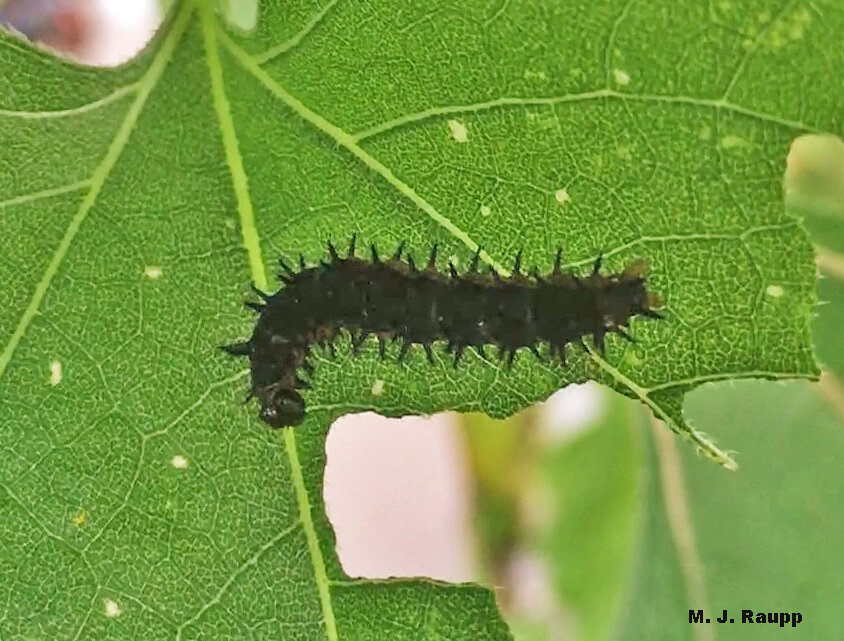 A phalanx of stout spines helps protect the checkerspot caterpillar from the jaws of hungry predators.

The first clues of the checkerspot visit were severely skeletonized leaves. It turns out that the silvery checkerspot female deposits her eggs in large clusters. Upon hatching, tiny caterpillars feed in a great herd on the underside of a leaf, removing the tender tissue and leaving behind only a skeleton of veins and the papery thin epidermal layer of the leaf’s upper surface. By September, several leaves of the sunflower wore the signature of roving bands of caterpillars. Here in Maryland, two broods of silvery checkerspots occur each year, the second of which spends the winter as caterpillars in a protected location on the ground. These caterpillars complete their development the following spring with the return of warm temperatures and the appearance of tender leaves of Jerusalem artichokes, black-eyed Susans and other members of the aster family. Don’t be surprised to see pretty silvery checkerspots nectaring or basking on a wide variety of plants as summer turns to autumn. They can be seen from June through September and have been reported in every county west of the Chesapeake Bay here in Maryland.

Advertised as dwarf sunflowers, these giants soon wore the marks of roving bands of caterpillars as they grazed on leaves and danced in the sunlight. Fully grown caterpillars removed great chunks of foliage before pupating and turning into spectacular butterflies, nectaring and basking in the late summer sun.

Bug of the Week thanks Eloise and Abigail for providing inspiration and sharing their caterpillars. Caterpillar guru Karin Burghardt identified the hungry herd and the wonderful Maryland Biodiversity Project website and David Wagner’s “Caterpillars of Eastern North America” were consulted in preparation of this episode.