Admire but do not eat: Elderberry borer, Desmocerus palliatus 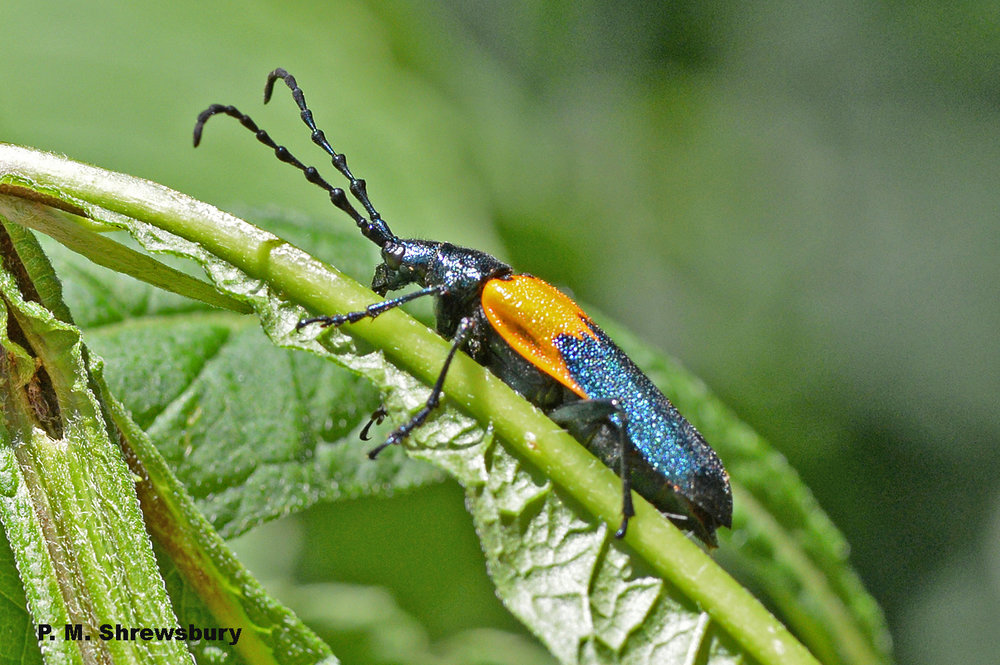 Iridescent cobalt blue and gold colors may warn predators not to consider the elderberry borer as a meal.

This week we return to the Shenandoah National Park where we recently met busy swallowtail butterflies sipping nectar and brush-footed butterflies visiting scat and collecting salt from perspiring hikers. We also met the fascinating flower longhorn beetles as they foraged for pollen from blossoms of plants in gardens and forests. This week we meet another member of the flower longhorn clan, perhaps the most beautiful beetle of all. In a patch of herbaceous vegetation along a trail, a gorgeous elderberry borer settled in for a snack just in time to be captured by the cameras. The startling hues of this blue and yellow beetle serve as a warning to predators not mess with this attention-grabbing large insect. 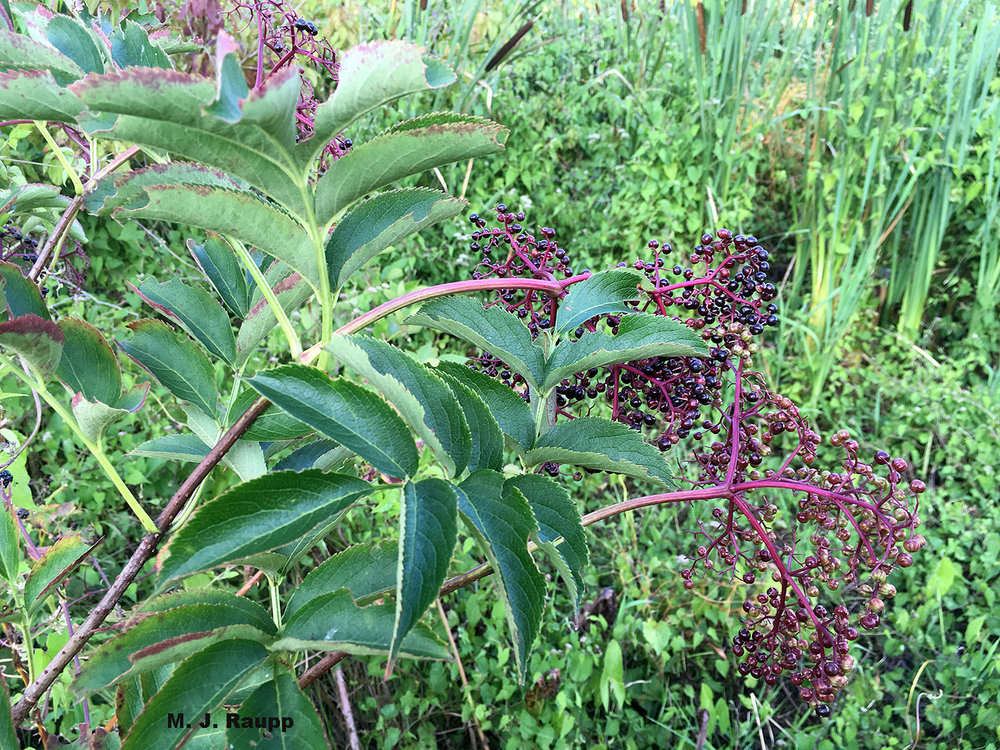 Adult elderberry borers feed on leaves and pollen from the flower heads of elderberry, and female beetles lay their eggs near the base of the elderberry plant.  Upon hatching, the tiny larvae bore into roots where they feed and develop on nutritious plant tissues. However, elderberry is chemically defended by potent cyanogenic glycosides, toxic compounds that are believed to be passed along from larvae to adults. A taste of these noxious chemicals during an attack may teach a predator that large blue and yellow insects are not to be included on the menu.

After dining on a tender leaf, it’s up, up, and away for the gorgeous elderberry borer (end of video at 15% actual speed). 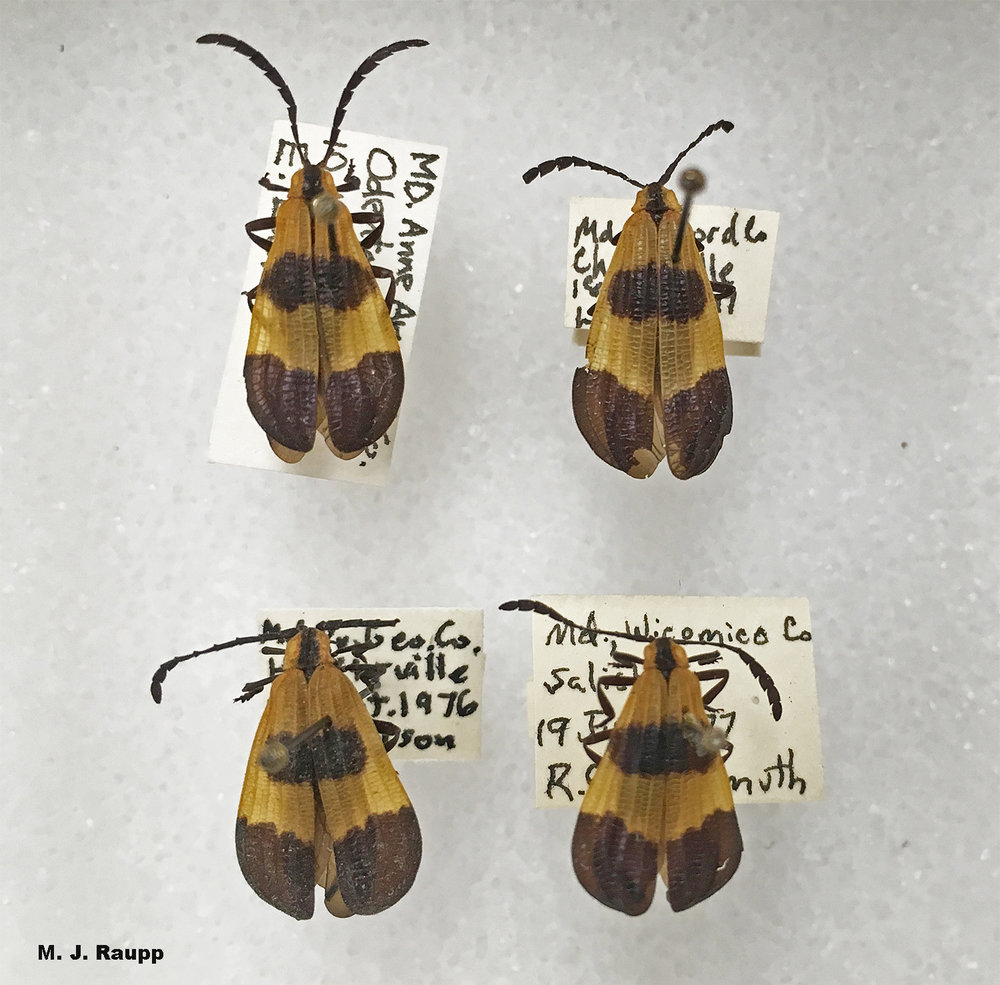 Net-winged beetles are members of a mimicry ring bearing contrasting patterns of light and dark colors.

This warning coloration, a.k.a. aposematic coloration, of contrasting colors of blue and yellow is also employed by other distasteful insects, including beetles and moths in a mimicry ring known as Müllerian mimicry, so named for the great German naturalist Fritz Müller.  One group of beetles in the mimicry ring are those known as net-winged beetles. These conspicuous yellow and bluish black beetles ooze a repellent mixture of acetylenic acid and lycidic acid from their joints when attacked by predators. These potent antifeedants have been shown to dissuade attacks by birds, spiders, and beetles. The distributions of several species of net-winged beetles overlap broadly with that of the elderberry borer. A summer hike in forest or meadow may reveal one of these intriguing colorful beetles, pretty to observe but not for consumption.

Bug of the Week thanks Dr. Shrewsbury for spotting the gorgeous elderberry borer and capturing an image. Two intriguing articles, “The effect of the Argentine ant on the threatened valley elderberry longhorn beetle” by Gary R. Huxel, and “Defensive Chemistry of Lycid Beetles and of Mimetic Cerambycid Beetles that Feed on Them” by Thomas Eisner, Frank C. Schroeder, Noel Snyder, Jacqualine B. Grant, Daniel J. Aneshansley, David Utterback, Jerrold Meinwald, and Maria Eisner, were used in preparation for this episode.