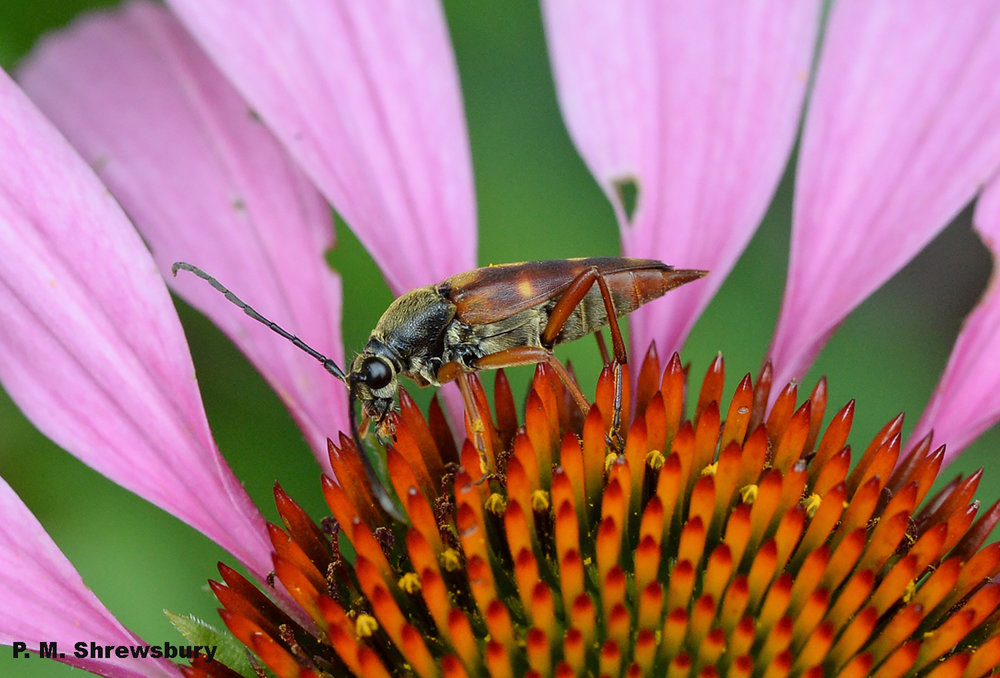 Note the dusting of yellow pollen on the back, legs, and mouthparts of this pretty longhorn beetle.

Over the past several weeks we met several spectacular butterflies visiting flowers to obtain carbohydrate-rich nectar, the rich source of energy that fuels flight. Well, insects cannot live by sugar alone. Like you and me, insects need sources of protein to develop, grow, and complete vital developmental processes, including the production of eggs in the case of females. Plants don’t disappoint in this regard. In fact, the earliest pollinators of plants were likely beetles. Unlike butterflies or bees whose mouthparts are adapted to sipping nectar from blossoms, beetles have chewing jaws designed for biting and munching food. Early on in the pollination game, beetles learned that pollen was a rich source of protein and for more than a hundred million years, beetles have been pollinating flowering plants. While visiting gardens and meadows this year, I have frequently stumbled across several species of longhorn beetles in the subfamily Lepturinae, beetles commonly known as flower longhorn beetles. One look at their antennae, which often exceed the length of their body, lets you know why they are called longhorns. The fact that they are regularly found foraging in flowers for pollen gives you the other part of their common name.

In this year of abundant pollinators, several species of flower longhorn beetles can be seen on blossoms in gardens, meadows, and forests.

While adults visit gorgeous blossoms in broad daylight and consume pollen as a primary food source, the immature stages, the larvae, live a boring life quite literally. You see, immature stages of these interesting pollen eaters are equipped with powerful jaws capable of cutting galleries in hardwoods, including oaks and maples. As they bore beneath the bark of dead and dying trees, potent enzymes in their gut digest refractory polymers including cellulose, which is a major component of wood. Studies have found that this remarkable ability is due in part to the microbiome found in the gut of longhorn beetle larvae. It seems that certain fungi found in decaying wood are ingested along with the wood consumed by the larvae. These fungi breakdown cellulose, thereby making the nutrients available to the developing beetle larvae.  What an interesting partnership.

Next time you visit a coneflower, take a moment to look for curious flower longhorn beetles and enjoy a six-legged wonder that delivers double duty providing ecosystem services as both a pollinator of flowering plants and a recycler of dead and dying trees.

Bug of the Week thanks Dr. Shrewsbury for providing images of longhorn flower beetles and the inspiration for this episode. Two interesting articles, “Records of Cerambycidae (Coleoptera) in Massachusetts with Notes on Larval Hosts” by Josef Vlasak and Katerina Vlasakova, and “ The Role of Ingested Fungal Enzymes in Cellulose Digestion in the Larvae of Cerambycid Beetles” by Jerome J. Kukor, David P. Cowan, and Michael M. Martin, were used to prepare this episode.