Bugs in Orange and Black: Defense and romance of the Gulf fritillary, Agraulis vanillae 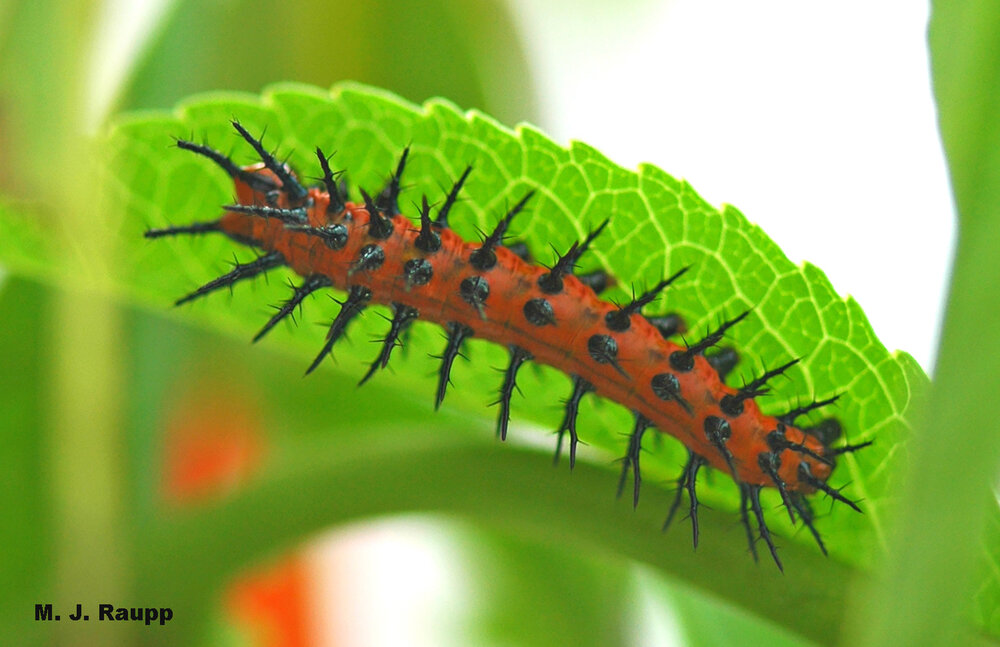 Striking contrasts of orange body and black spines may serve as a warning to predators to avoid making a meal of Gulf fritillary caterpillars.

This week Bug of the Week finds itself in the tidewater of Virginia and on the sunny shores of South Carolina, where brilliant members of the aster clan carpet the sands just leeward of the dunes. Here in the waning days of autumn a beautiful butterfly dressed in orange and black sips nectar in preparation for its journey to frost-free zones along the Gulf of Mexico, while others find romance along a footpath in a garden. The Gulf fritillary is a broad ranging species taking up permanent residence from Argentina to the southern United States. During summer, peregrinations take it as far north as San Francisco on the west coast and New Jersey on the east coast, but in autumn this vagabond travels south to the warm climes of the Floridian peninsula to spend the winter. 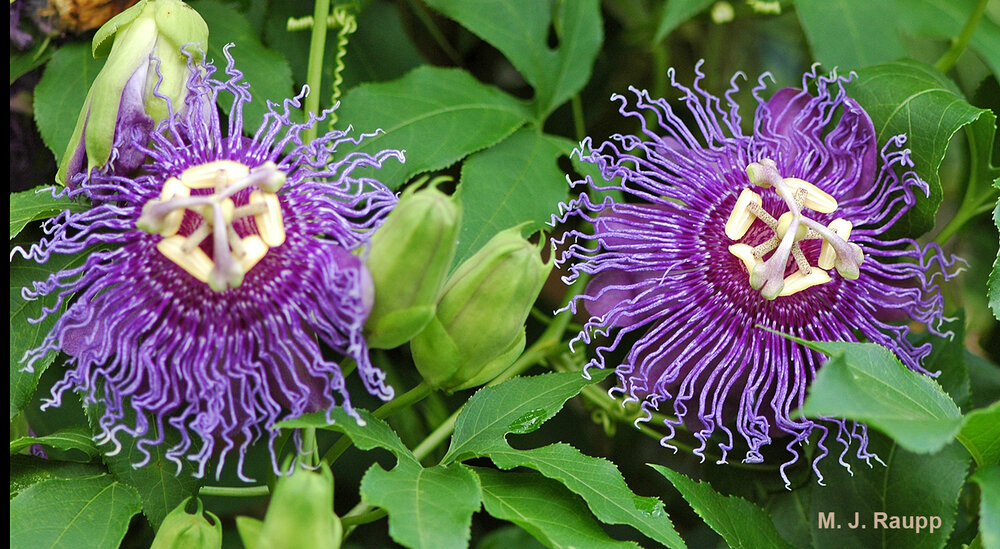 Flowers of the passion vine are among the most magnificent in the plant world.

Like other members of the longwing butterfly clan, larvae of this orange and black beauty consume leaves of passion fruit vine. The blossom of the passion fruit vine is one of the most gorgeous in the angiosperm world. Exotic flavors of the passion fruit are used around the world adding zest to ice cream, cheesecake, and mixed drinks. Passion fruit is rich in vitamin C and lycopene and consuming this delicacy is said to sooth a queasy stomach, according to Andean lore. As a group, passion fruit plants are protected from most leaf-munching caterpillars and other vegan insects by a veritable witch’s brew of highly toxic chemicals including alkaloids, a family of toxins that includes strychnine and nicotine, and cyanogenic glycosides, chemicals that release cyanide upon entering the digestive tract of a caterpillar or human. 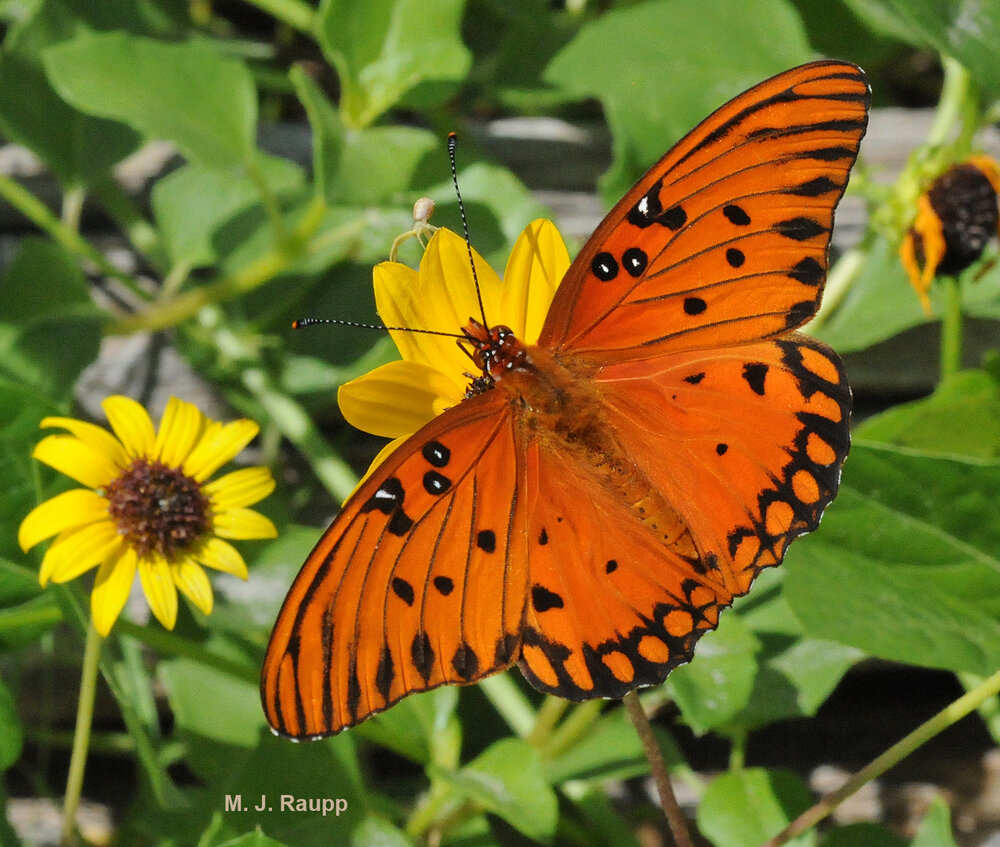 The gorgeous Gulf fritillary butterfly harbors a couple of unpleasant surprises for any would-be predator.

However, the Gulf fritillary and other members of its clan, including the zebra longwing we met in a previous episode, turned the tables on passion fruit plants, bypassing the noxious defenses and feasting with impunity on their leaves. Some species of longwings sequester cyanogenic glycosides from their food and others manufacture these compounds on their own. presumably for defense. The striking orange and black coloration of the Gulf fritillary warns vertebrate predators not to mess with this beauty. In addition to any plant derived defenses, the gorgeous Gulf fritillary has one more bit of chemical trickery to help keep predators at bay. Glands on the abdomen produce and release a concoction of complex esters when the adult butterfly is disturbed. This stinky defensive fluid dissuades predators such as birds from making a meal of these dazzling butterflies.

Like its cousin the Gulf fritillary, a zebra longwing caterpillar consumes large quantities of passion vine leaves each day.

But the beautiful Gulf fritillary is not all about noxious chemicals and defense. Oh no, in the Norfolk Botanical Garden some Halloween romance was literally afoot, where a mating pair of butterflies engaged in a quixotic duet along a footpath. Many male butterflies, including Gulf fritillaries, have a clever trick for winning the affections of would-be mates. At the tip of his abdomen the male Gulf fritillary has small bristles called hair pencils. The male uses his hair pencils to distribute aphrodisiac pheromones on the antennae of a potential mate. Courtship pheromones are often released by the male over the female while both are in flight. These pheromones calm the female’s innate escape response, and upon landing the male may hover over the female dusting her with more pheromones. The resulting romantic swoon induced by the pheromone allows the male to approach his mate and, well, shall we say, fulfill the biological imperative of procreation.

Asters provide a rich source of carbohydrates to fuel the Gulf fritillary’s autumn migration to frost-free zones in the Deep South along the Gulf of Mexico. Along a foot path a male Gulf fritillary releases aphrodisiac pheromones over the antennae of a potential mate. Will this clever behavioral trick result in a Halloween treat? 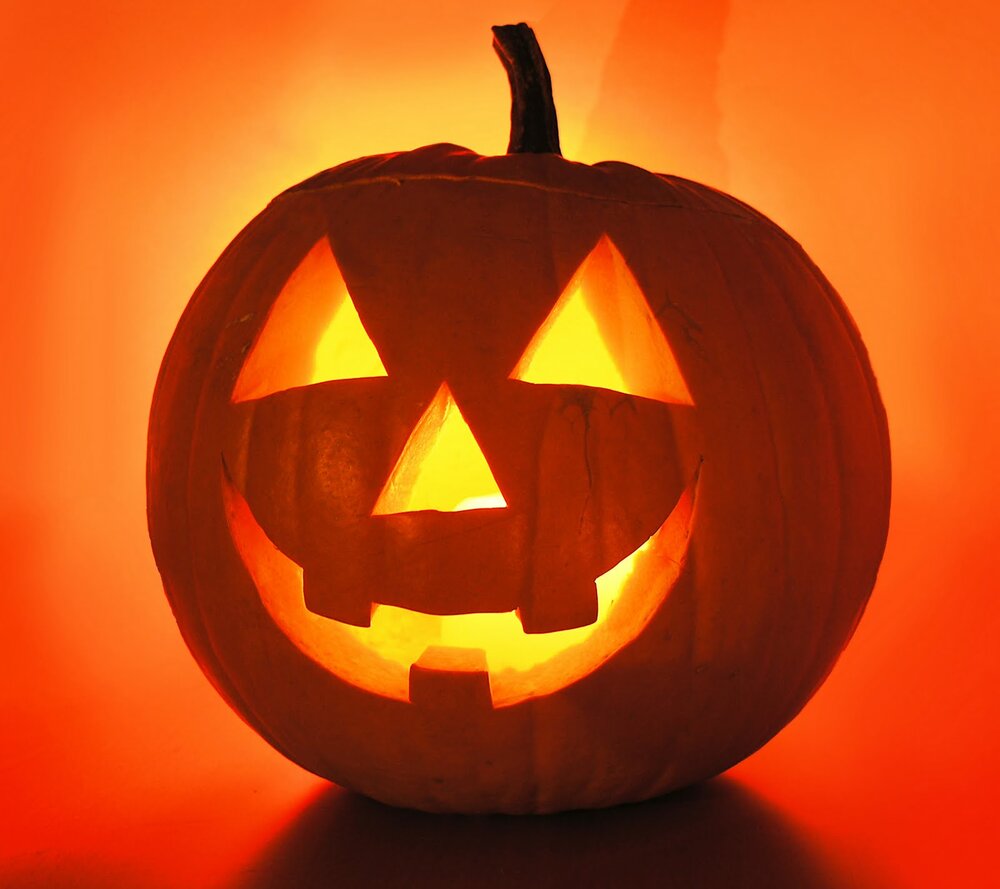 Beautiful, dangerous, romantic; what could be more perfect for an insect dressed in orange and black for this festive autumn season? Hope you have a Happy Halloween!

References used in the preparation of this Bug of the Week include ‘Caterpillars of Eastern North America’ by David L. Wagner; ‘Coevolution of Animals and Plants’ by Lawrence Gilbert and Peter Raven; ‘Gulf Fritillary Butterfly, Agraulis vanillae (Linnaeus) (Insecta: Lepidoptera: Nymphalidae)’ by Jaret C. Daniels; ‘Novel chemistry of abdominal defensive glands of nymphalid butterfly Agraulis vanillae’by Gary N. Ross,Henry M. Fales, Helen A. Lloyd, Tappey Jones, Edward A. Sokoloski, Kimberly Marshall-Batty, and Murray S. Blum; and ‘Introduction to General and Applied Entomology, Third Edition’ by V.B. Awasthi. We thank the amazing arborists of Trees South Carolina and the Norfolk Botanical Garden for providing the inspiration for this Bug of the Week.