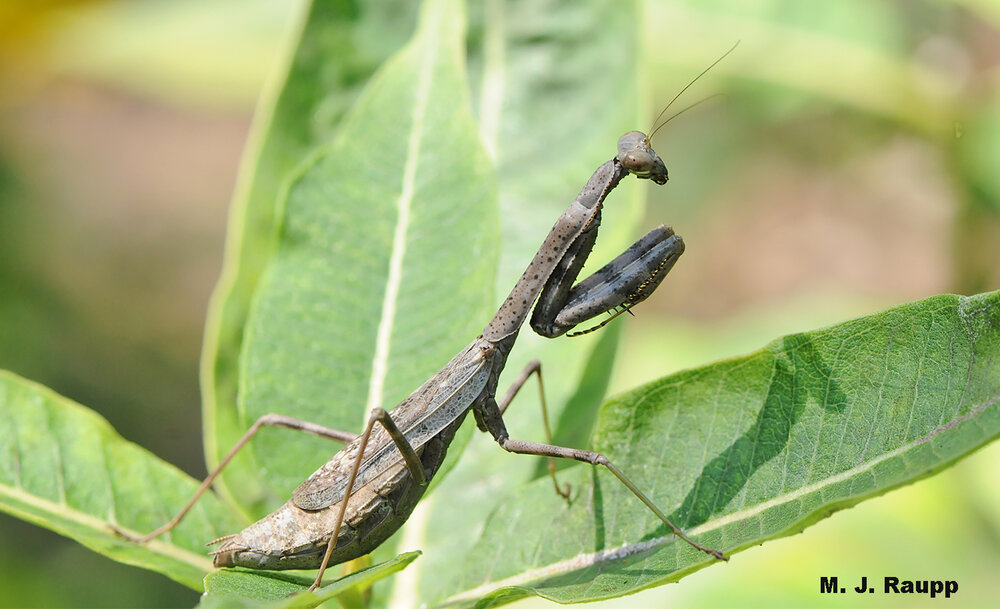 A gorgeous Carolina mantid waits for a meal – or perhaps a mate who might be a dinner “guest”.

What a year this has been for insects in general, with banner populations of butterflies, moths, stink bugs, and many others. Not surprisingly, when populations of plant-eaters flourish, we often see an upswing in consumers higher up in the food chain. In previous episodes, we met the two amazing and beautiful foreigners that sit atop the invertebrate food webs in our landscapes, the European mantis, Mantis religiosa, and the Chinese mantid, Tenodera sinensis. This week we visit one of our native mantids, the Carolina mantid, that is turning up in record numbers in our area.

The Carolina mantid ranges from the Canadian border into Mexico and from the east coast to Nevada and Arizona. Like other mantid species, Carolina mantids eat a wide variety of insects and spiders found in gardens and landscapes. And yes, on occasion the female consumes her unfortunate mate, especially so when mantids are raised in captivity. The extent to which this is an artifact of being raised under unnatural conditions is not known, but it is reported that well-fed gals are less likely to consume their suitors than hungry ones. Several of the mantids I have seen over the past week are gravid females, those carrying a full load of eggs. When enough prey has filled her belly and a lucky, or perhaps unlucky, male has contributed his sperm, the female will deposit her eggs in an egg case. The entomological term for the egg case is ootheca. A mantid’s ootheca is composed of frothy material called spumaline that has the look and feel of an elongated glob of Styrofoam. The female mantid secretes spumaline from glands in her abdomen as she deposits eggs, usually on vegetation or on structures such as fences and houses. The ootheca serves as a protective matrix for scores of tiny eggs resting within.

From afar, a very pregnant female Carolina mantid seems to have her sights set for incoming prey. As the camera invades her personal space, she gives the paparazzi the kind of “what are you looking at” stare that only a mantid can deliver. This disdain for bug geeks apparently starts early. Even juvenile Carolina mantids would rather groom their raptorial forelegs than indulge a guy with a camera. However, the arrival of a large carpenter bee can trigger a hasty retreat. 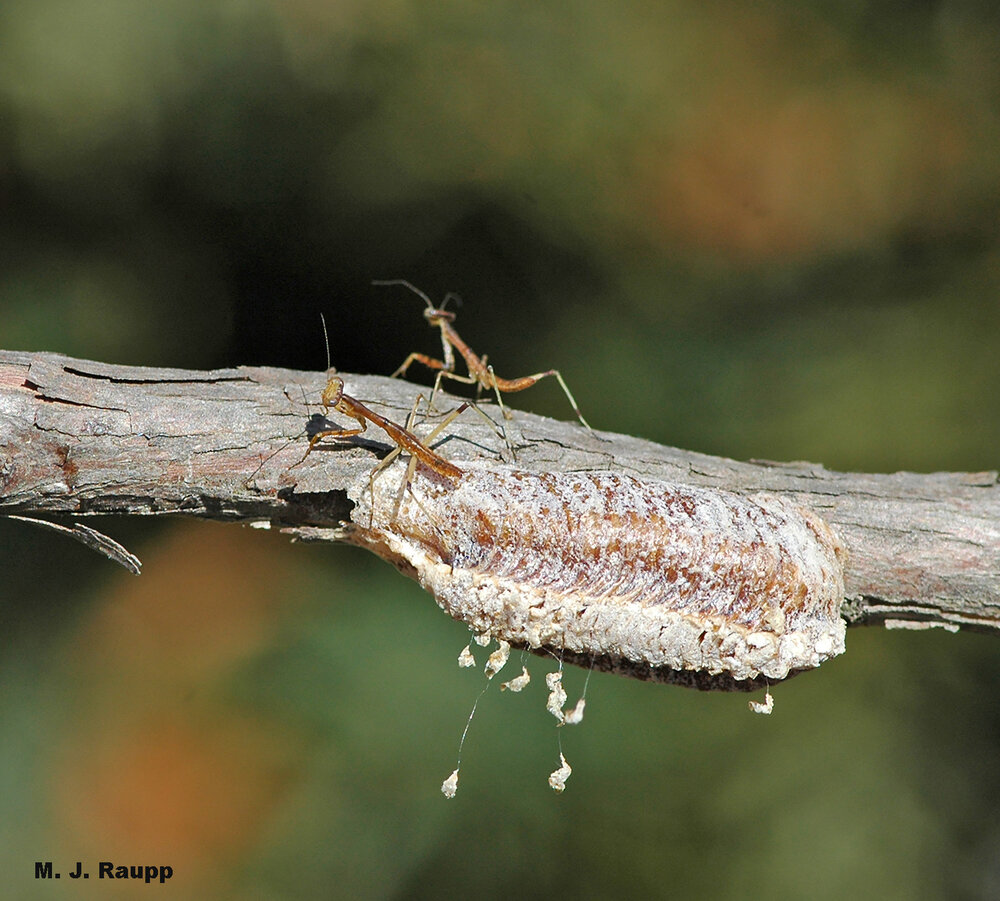 After emerging from the ootheca, tiny hatchlings take their first glimpse of a world full of wonderful morsels to eat and fearsome predators to be eaten by.

After surviving the chill of winter, eggs complete their development with the return of warm weather. Warm weather signals the return of foliage to plants and the presence of legions of small tasty insects that serve as food for developing mantids. Sometimes mantids will deposit eggs on vegetation that could find its way into a home, such as on a Christmas tree or pine garland. In the warmth of a home, eggs within the ootheca may develop and hatch, and become an extra special holiday surprise. With the holiday season not far away, perhaps it is time to make a mental note to inspect boughs and trees before they enter a home.

Although egg cases of praying mantids can be purchased commercially and placed in the garden, the effectiveness of mantids as biological control agents is ambiguous at best. Remember, they are generalist predators and may capture and eat beneficial insects as well as pests, not to mention each other. Nonetheless, mantids are fascinating to observe and study and I always have an ootheca in my landscape to restock my garden with these marvelous creatures when spring returns.

Bug of the Week thanks Kathleen, the crew at MPT, and the staff and students at the Howard Conservancy for providing the inspiration for this episode.