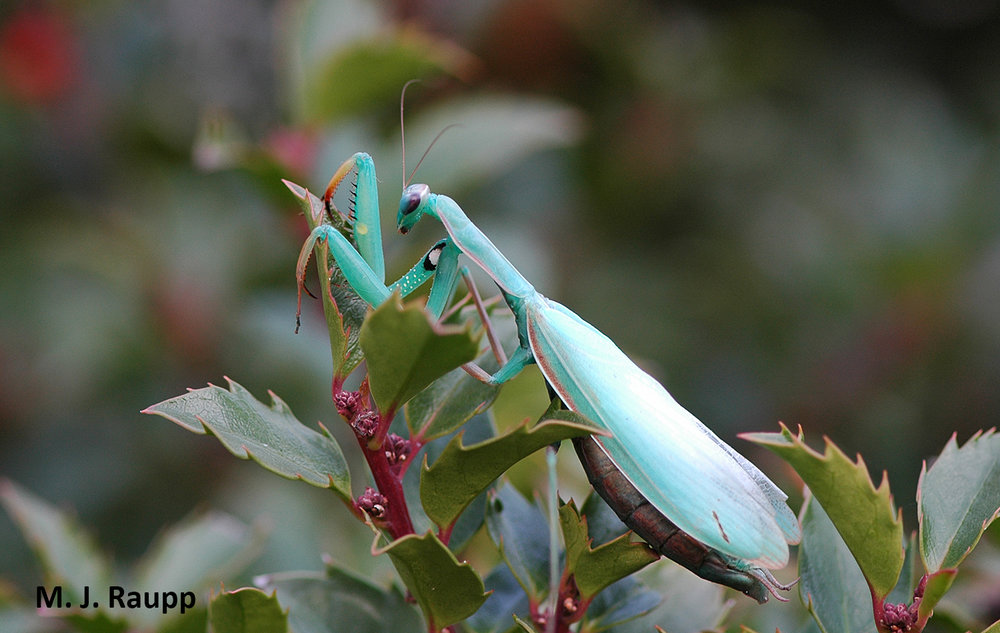 A small black spot often with a white center on the inside of each front leg provides a quick clue to separate the European mantis from other species found in our region.

Late summer and early autumn are times when sightings of praying mantises often generate interest from gardeners here in the DMV. It’s not that mantises have spontaneously generated during this season. Rather, these cryptic sit-and-wait predators are pretty tough to spot earlier in the season when they are small and blending in with the foliage of plants on which they hunt. This week an eagle-eyed graduate student spotted a beautiful European mantis hiding in my flower bed. 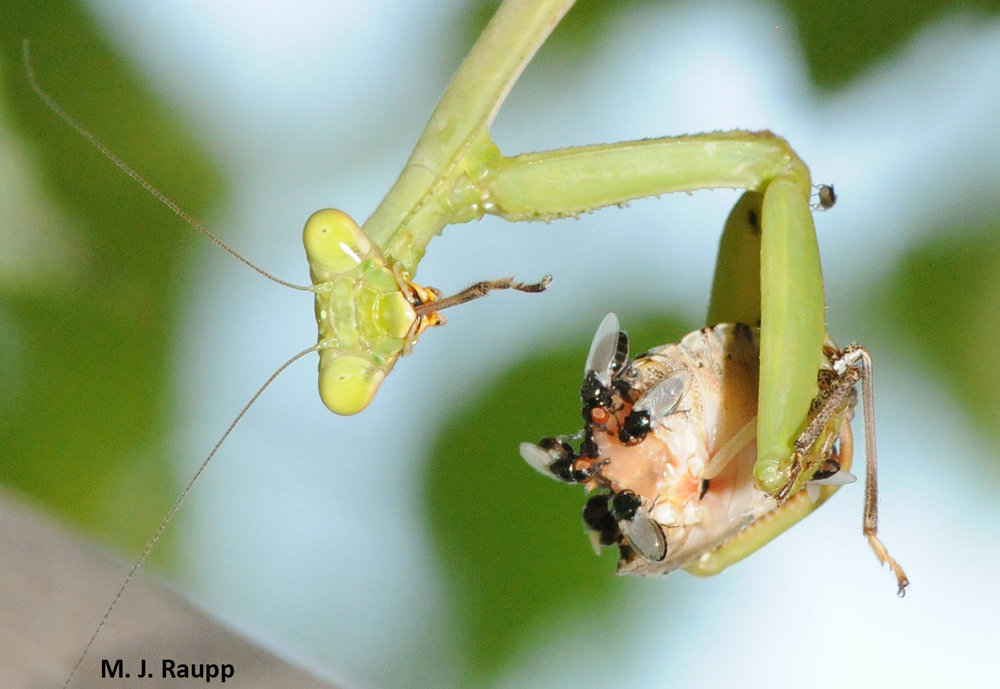 The European mantis was first discovered in the US in 1899 in New York State. It arrived apparently as a stowaway on a shipment of nursery stock from Europe. The name ‘mantis’ comes from the ancient Greeks who used the word mantis to describe a soothsayer, or one that could see into the future, and the future of this mantis in the New World has been bright. Since its introduction to North America, this magnificent creature has spread throughout much of the United States. It is now widespread east of the Mississippi and northward into Canada. In years past, European mantises have been invited into our laboratory to enjoy a life devoid of the predators so plentiful outdoors. In captivity our young mantises spend time cavorting in a terrarium and practicing their hunting skills on fruit flies, the mainstay of their diet. As they mature, these predators progress to larger prey such as grasshoppers, caterpillars, and crickets. 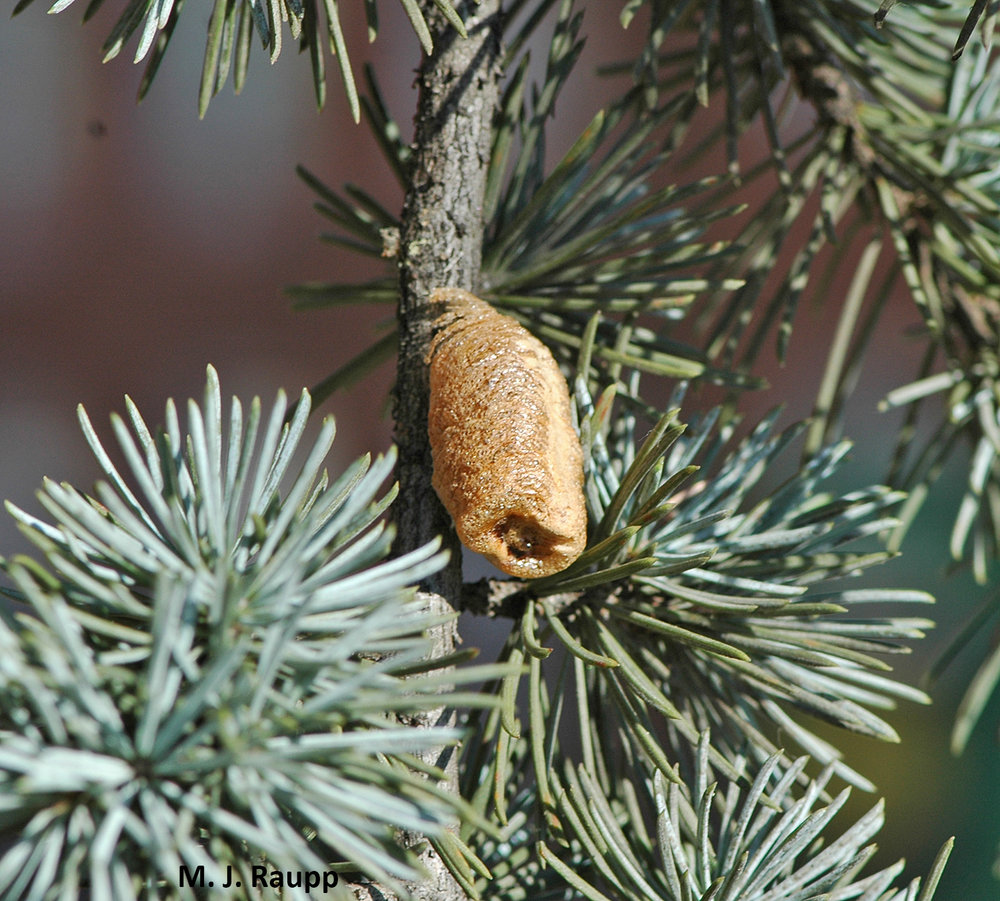 This brown egg case, or ootheca, contains scores of eggs that will survive the winter and hatch next spring.

As we learned in a previous episode of Bug of the Week, mantises have a disconcerting habit of eating each other. To prevent unfortunate dining experiences, our mantises are raised in isolation. As summer becomes autumn, our mantises turn their attention towards finding a mate. One particularly lovely femme fatale named Manti enjoyed dinner and a date with a charming, but hapless, and soon headless, gentleman named Little Richard. Manti later presented us with a spectacular egg case called an ootheca. The ootheca is a Styrofoam-like structure deposited by the female mantis on a structure such as a branch or trunk of a tree. A single ootheca may house more than one hundred eggs. Outdoors these eggs endure the inimical winter season safe inside the ootheca, and hatch when warm temperatures and abundant tasty prey return in the spring.

Mantises are not without their own predators. By day, birds hunt these marvelous insects. By night, as mantises fly about seeking food or mates, they are hunted by hungry bats. Bats use ultrasonic signals to detect prey such as moths and mantises in the dark. One might think mantises are helpless in defending themselves from these stealthy nocturnal predators. But mantises have a clever trick up their sleeve or, more correctly stated, a clever ear on their chest. Many species of mantises have evolved an organ to detect sound, an ear so to speak, on the underside of their thorax. Mantises use this ear to detect ultrasonic “chirps” emitted by hunting bats. When the soaring mantis detects the signals of a hungry bat, it evades the bat by quickly diving to the ground.

This morning I happened to spy my resident mantis resting on a milkweed plant enjoying a breakfast of a large milkweed bug. Milkweed bugs bear the orange and black color pattern of other milkweed feeders, including the monarch butterfly, that warn predators of noxious chemicals stored in their bodily tissues. In fact, studies of the Chinese mantid we met in a previous episode demonstrate its ability to learn not to consume nocent milkweed bug prey.  Maybe my European mantis has a more ironclad constitution than its eastern cousin. Or maybe this gastronomic adventure will turn into a dietary mistake. Tomorrow I will check and see if the mantis experienced any digestive distress. As you work in the garden over the next several weeks, keep your eyes open. It’s a good time to catch a glimpse of these beguiling ambush predators.

Hey milkweed bugs, guess who is coming to breakfast. That’s right, a European mantis. And guess what, you’re breakfast!

Bug of the Week thanks Lizzie Dabek for spotting the mantis and providing the inspiration for this episode. The fascinating articles “Recent range expansion of the Praying Mantis, Mantis religiosa Linnaeus (Mantodea: Mantidae),in British Columbia” by Robert Cannings, “The midline metathoracic ear of the praying mantis, Mantis religiosa” by  David D. Yager and Ronald R. Hoy, and “Mantids and milkweed bugs – efficacy of aposematic coloration against invertebrate predators” by May Berenbaum and E. Miliczky, provided keen insights used in this story.