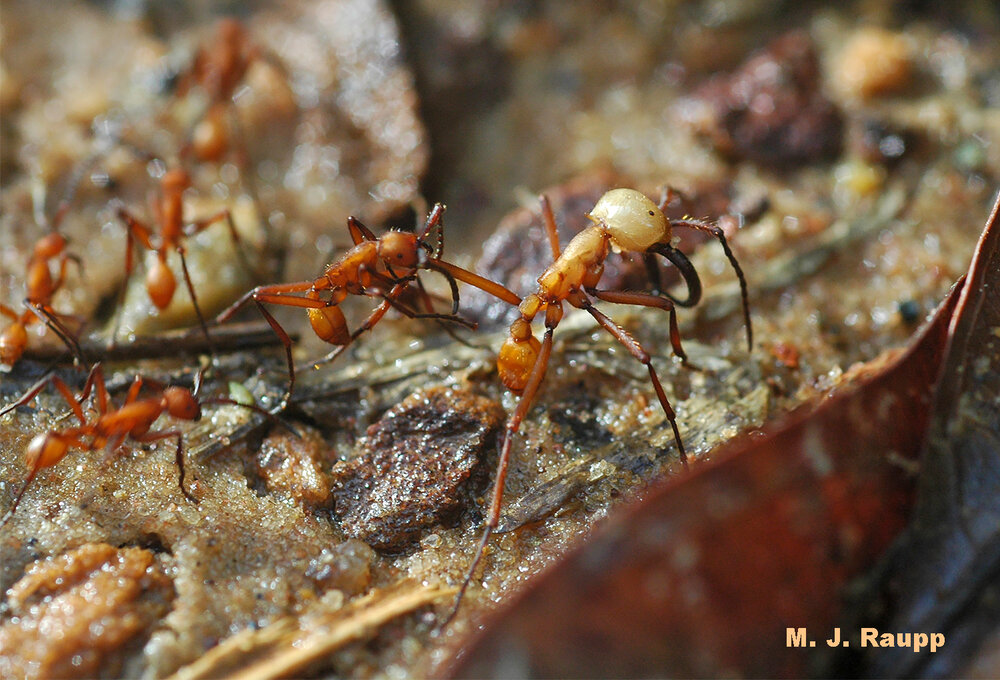 Ferocious soldiers protect the flank of the raiding column of workers. 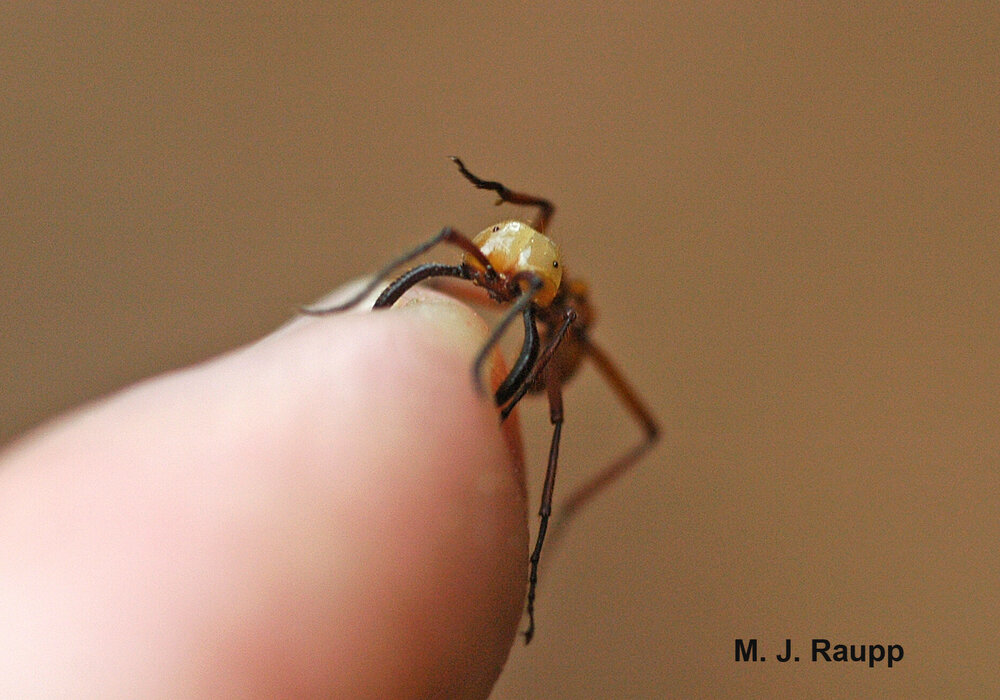 Giant jaws deliver lethal bites to predators and teach a lesson to a nosy bug geek.

Last week we met the consummate farmers of the rainforest, leafcutter ants. Once again, we head back to Costa Rica to warm up and visit an insect that rocks in at 9.5 out of 10 on the ferocity scale – army ants, arguably the most rapacious insect predator in the jungle realm. While walking along a forest edge near the Savegre River, my path was blocked by a streaming column of furious army ants. This bustling brigade was only a small portion of a pillaging horde hunting food in one small corner of the forest. Single colonies of army ants contain hundreds of thousands to more than a million workers capable of capturing and eating thousands of assorted arthropods each day. The column consisted of large and small workers busily transporting food to a temporary food cache or colony site called a bivouac. In lesser numbers within and alongside the column were imposing soldiers. These grotesque giants sported huge, sickle-shaped jaws used to defend workers and colony from attack. The jaws of the soldiers are so large and highly modified for grappling and pinching that they are of little use for eating. In a reenactment of a scene in Mel Gibson’s “Apocalypto”, I tested the ability of a soldier’s jaws to act as a wound suture. They worked just fine.

At the raiding end of the ant column, a chaotic melee of murder and mayhem ensued as swarms of stinging and biting workers capture other arthropods, primarily insects and spiders. Other unfortunate small animals that fail to escape the approaching horde may also succumb. After subduing victims, workers dismember their prey and transport them in large and small pieces back to a food cache or bivouac to feed developing larval ants, their attendants, and the hungry queen. The bivouac is usually in a protected location beneath a log or between the buttress roots of a large tree. It is formed by thousands of ants linked leg to leg in a protective living cover for the queen and young. However, army ants may set up bivouacs in man-made structures. I have witnessed this event firsthand on a recent study abroad trip to Belize where army ants raided a research station and established a bivouac in an outhouse. This provided quite a surprise when a sleepy student undertook a nocturnal visit to the privy.

Watch and learn why army ants are among the most awesome predators of tropical rainforests. 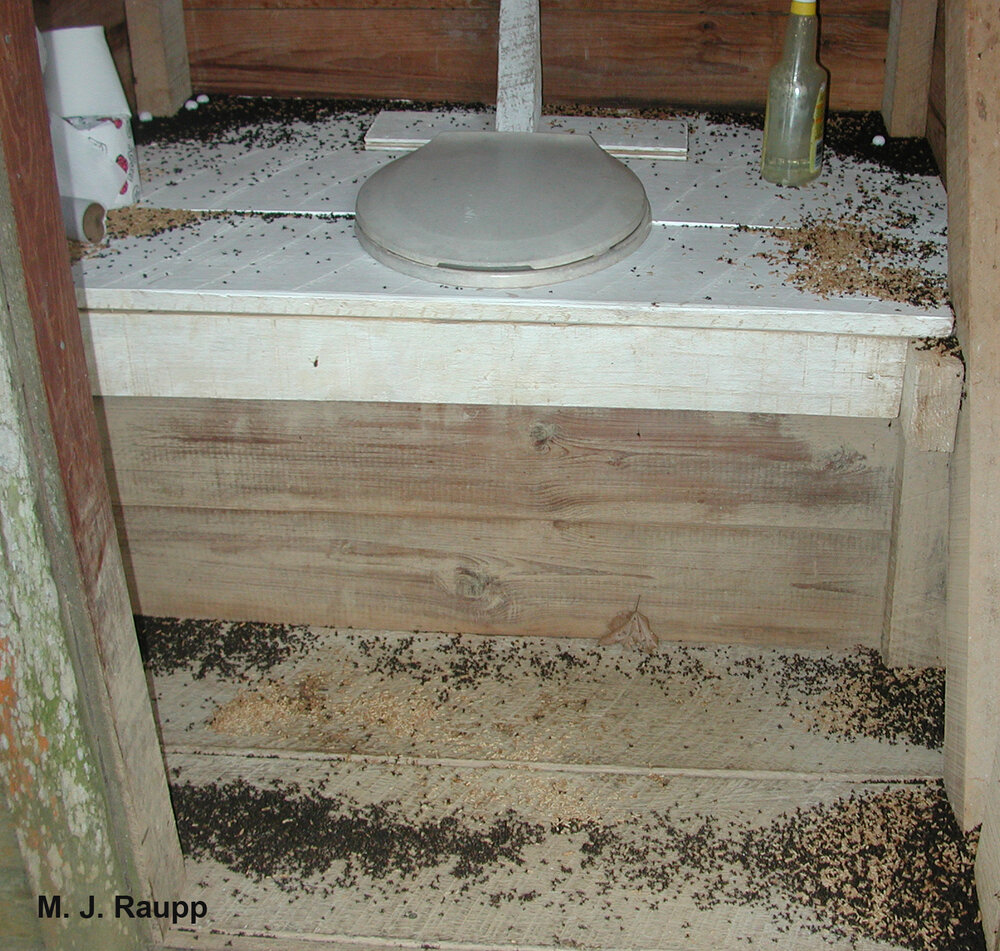 A night time trip to the outhouse can be especially exciting when army ants set up a bivouac inside.

The life of army ant colonies is characterized by two distinct phases. When the colony is in the nomadic phase, workers hunt by day and bring food back to the colony, but they stop carrying food to the bivouac as night approaches. Bivouacs are relocated periodically when excited workers transport food and ant larvae away from an old bivouac to a new one along one of the outward leading trails. As the old bivouac disintegrates, the queen and her entourage follow a chemical trail through the forest and establish a new bivouac at a different location. The regular relocation of the bivouac in the nomadic phase enables legions of workers to pillage untapped areas of the forest for food each day. Several times a year, the colony enters a stationary phase. During this phase, the colony hunkers down in one location for several weeks. Larvae begin to pupate and the queen lays as many as 30,000 eggs each day. During the stationary phase, raids continue but are less frequent and intense. In a fascinating study, Nigel Franks discovered that during the stationary phase, army ants changed direction of successive foraging bouts. The direction of each new foray differed from the previous one by approximately 123 degrees in a clockwise direction. By searching different quadrants of the habitat sequentially, ants avoid hunting in the same area twice. Foraging in different areas may also allow new victims to repopulate recently searched areas. Over the span of a few weeks, thousands of eggs hatch and hungry young larvae place enormous demands for food on the colony. By now, ants produced during the previous stationary phase have completed development and matured into new workers. With thousands of new workers to forage and the demand for food high, the colony resumes its nomadic phase and it’s time for many small insects and other animals to run for their lives or die.

Bug of the Week thanks Costa Rica Vacations and the intrepid guides Mono and Kenneth at Rafiki Lodge and Ale and Gera at Playa Cativo Lodge for providing the inspiration for this episode. The wonderful book “The Ants” by Bert Hölldobler and Edward O. Wilson, “The Insect Societies” by Edward O. Wilson, and the interesting article “Army Ants: A Collective Intelligence” by Nigel Franks, were used as references for this episode.