Salt of the earth, salt of the human: Swallowtails and brush-footed butterflies, Papilionidae and Nymphalidae 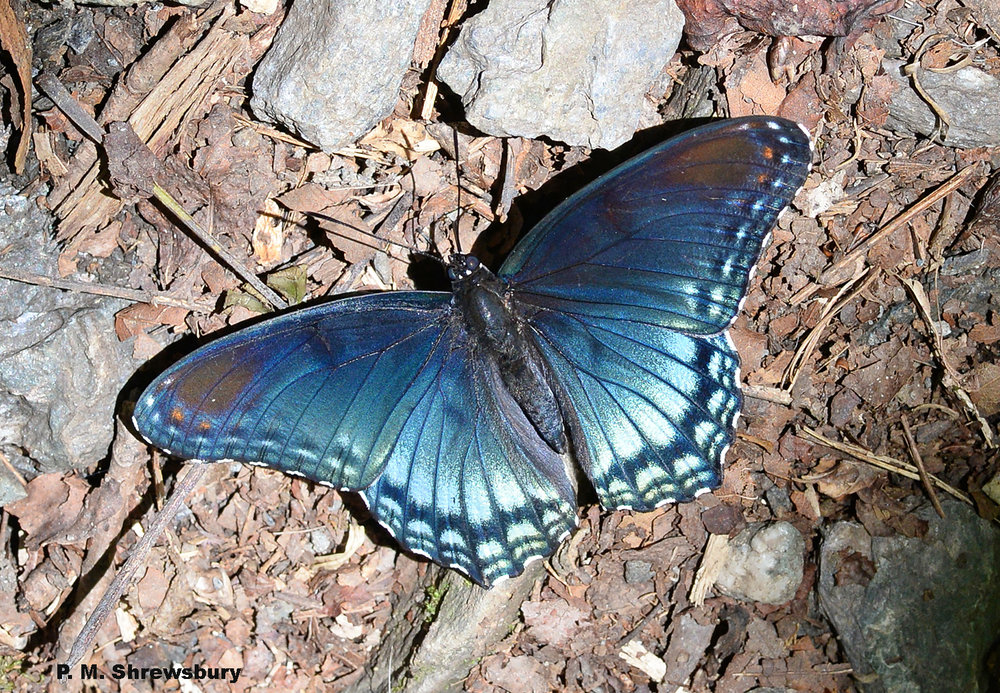 Red-spotted purple butterflies are often seen in light gaps in the forest. Are they simply basking in the sun or foraging for salt deposits in the soil?

From insects to humans the element sodium is needed for physiological processes ranging from the contraction of muscles and firing of nerves to maintaining the fluid balance of body tissues. For many species of butterflies one consequence of consuming a diet rich in nectar is a need to find supplemental sources of sodium to make up for the relative lack of sodium in the nectar of plants. While carbohydrates abound in nectar, it turns out that nectar is notoriously low in other essential nutrients, one of which is sodium. To solve this sodium shortage, butterflies have evolved clever strategies to acquire the sodium they need. One of these behaviors is known as puddling. Puddling involves placing their proboscis on a substrate and imbibing sodium rich fluid found on substrate’s moist surface. Typical puddling substrates include bird droppings, animal dung, and mud – salt of the earth. 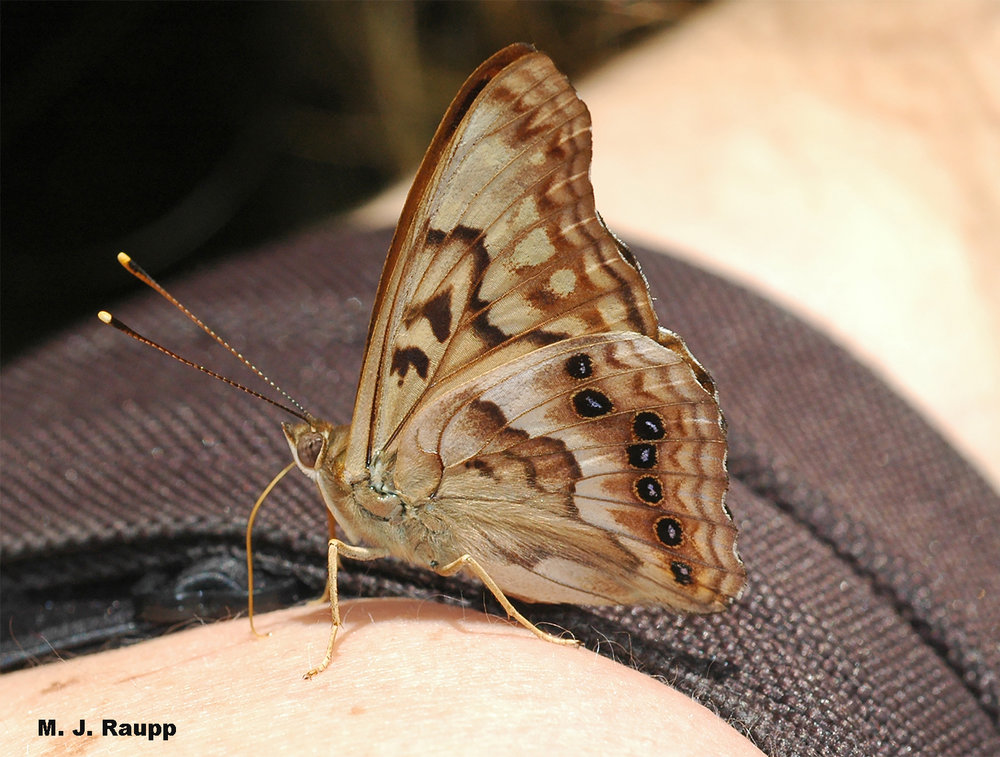 A shoulder glistening with perspiration provides much needed salt to a fearless tawny emperor butterfly.

Last week we visited beautiful comma butterflies and their pretty, spiny caterpillars while on a hike in the Shenandoah National Park. During the same adventure, temperatures soared into the upper 90’s and hikers became drenched in perspiration. Human sweat contains relatively large amounts of salt. As the day progressed and sweat moistened our skin and clothing, several species of brush-footed butterflies including commas, red admirals, tawny emperors and red-spotted purples took full advantage of this salt resource as they landed on exposed skin and moistened clothing to enjoy the salty treat. The elongated proboscis of the butterfly provided a slight tickling sensation as it lapped and absorbed small beads of perspiration on the back of my hand. During these encounters, salt-seeking butterflies displayed a complete lack of apprehension while feeding on a human. The drive for salt appears to be strong and capable of overcoming the fear of proximity to a large, potentially dangerous animal. Butterfly experts have discovered that the puddling game is played mostly by male butterflies. It turns out that during copulation, in addition to transferring sperm, a male butterfly may donate a large dose of sodium to his mate, obviating the need for her to seek additional sources of sodium. What a guy!

Tiger swallowtails, painted ladies, red admirals, and commas obtain much needed sodium from salt containing substrates on the ground and from skin or clothing moistened by perspiration.

With lots of summer remaining and temperatures sure to reach the 90’s, take a hike in the forest, work up a little sweat, and treat some butterflies to the salt of the humans.

Bug of the Week thanks Drs. Szczepaniec and Shrewsbury for posing with salt-seeking butterflies and providing the inspiration for this week’s episode. The fact-filled article “Nutrient acquisition across a dietary shift: fruit feeding butterflies crave amino acids, nectivores seek salt” by Alison Ravenscraft and Carol L. Boggs was consulted in preparation for this story.