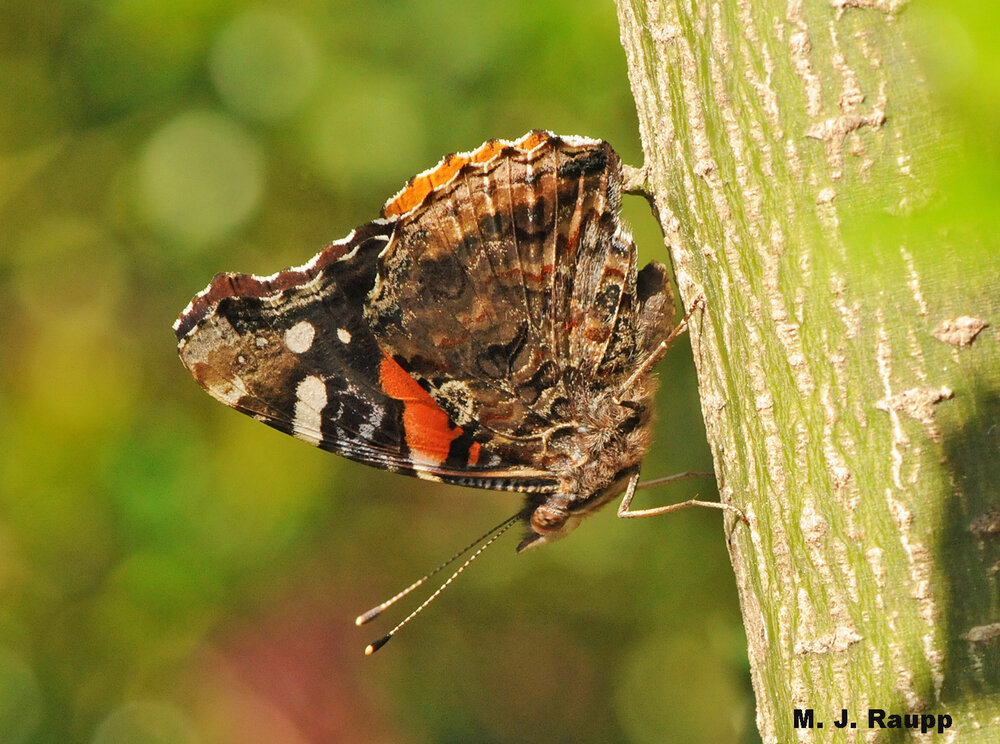 A red admiral appears to survey the surrounding landscape from a small branch. Is it seeking a mate or getting ready to search for food?

In a previous episode, we met an electrolyte-seeking red admiral butterfly as it lapped salty perspiration from the back of a hand.  While meeting this butterfly up close and personal was fun, one of the pursuits of typical bug geeks is to observe not only adult insects but also their fascinating and sometimes-cryptic immature stages. The best hope to observe red admiral caterpillars rests on a visit to the moist forest where stinging nettle abounds.  You see, stinging nettles and other members of nettle family, Urticaceae, are favored hosts of red admiral caterpillars.  Having experienced great luck in spotting several red admirals, other brush-footed butterflies, and swallowtails in Shenandoah National Park, a return to nettle covered slopes of the verdant woodland forests seemed like the right move to hunt caterpillars.

After several failed attempts to find a shelter occupied by a red admiral, we hit pay dirt and found a few beautiful caterpillars inside their leafy redoubts. Video credit: M. J. Raupp and P. M. Shrewsbury 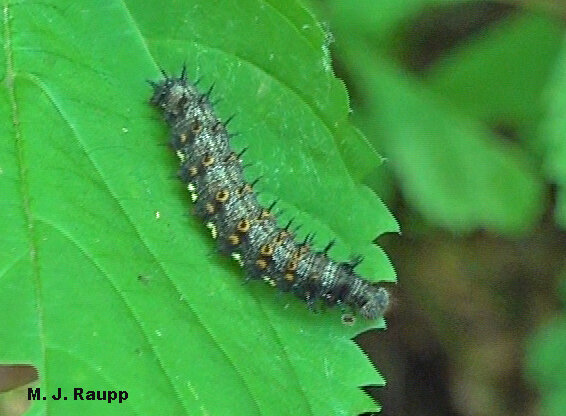 This mature red admiral caterpillar will soon form a chrysalis.

On the lower slopes of Hawksbill Mountain stinging nettles abound and red admiral butterflies are easily spotted along the rocky trail. Some caterpillars of butterflies, like those of black swallowtails, are easy to find as they feed in the open on their host plants. However others, like caterpillars of the silver spotted skipper and spicebush swallowtail, have a clever trick to avoid the ever-searching eyes of hungry predators. As they feed, young caterpillars fold and roll individual leaves of their host plant around their bodies, creating an edible shelter. As caterpillars develop and grow, several leaves may be bound together to form a very private and protective “nest.” Pupation also occurs within these leafy shelters.

Whether its extracting salt from a pebbly beach along the Potomac, lapping perspiration from the back of a hand, seeking nutrients from a weep-hole in a tree, or tasting the surface of a lawn chair, red admirals are fascinating to observe.  Video credit: M. J. Raupp and P. M. Shrewsbury

In the waning days of autumn, adults that emerge from pupae will begin a southward journey to warmer realms in Texas and further south to escape the rigors of winter temperatures. When winter releases its grip over much of North America, hibernating adults begin stirring and will soon undertake their journey northward to take advantage of fresh patches of nettles blanketing the forest floor. Two broods of red admirals occur annually throughout much of the United States. Red admirals are not unique to the United States and are found in parts of Central America, Mexico, Canada, several Caribbean Islands, New Zealand, Europe, Northern Africa, and Asia. Last week red admirals were very plentiful in butterfly gardens throughout the DMV, but you better hurry to get a glimpse of these beauties. With the first frost, a speedy exodus of our migrant butterflies to southern latitudes might be just around the corner.

Bug of the Week thanks Dr. Shrewsbury for wrangling and videoing red admiral caterpillars. Two superb websites, Butterflies and Moths of North America and Maryland Biodiversity Project, were used to prepare this episode, as was David Wagner’s remarkable Caterpillars of Eastern North America.