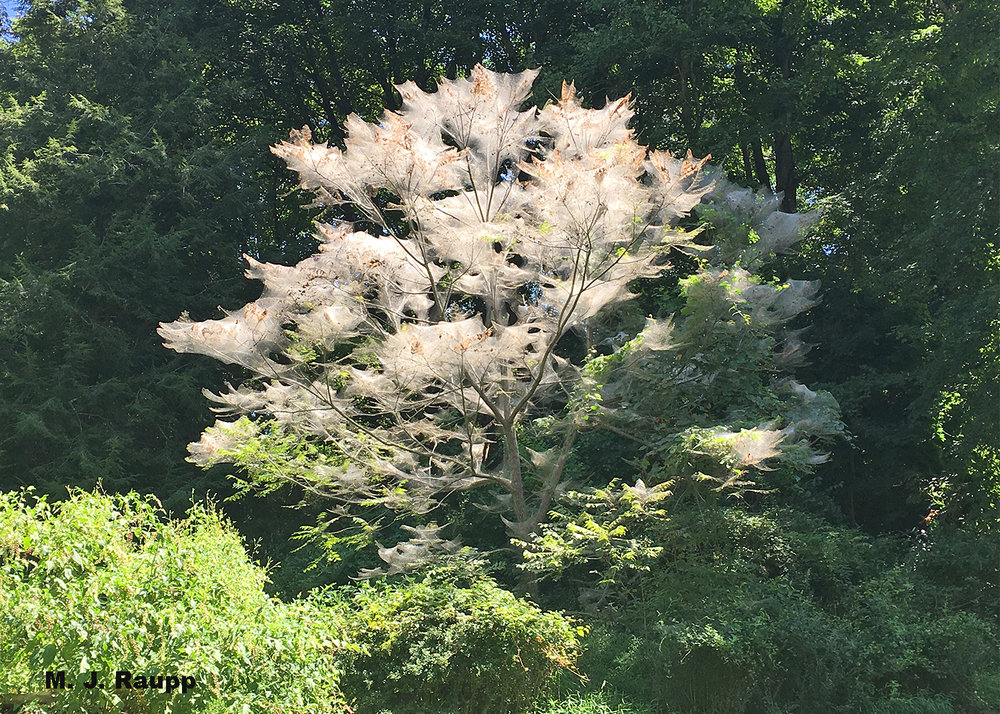 An explosive season for fall webworms finds trees throughout our region festooned with silken webs.

We’ve had a lot of fun this season enjoying Lepidoptera, members of the moth and butterfly clan, where swallowtails, brush footed butterflies, and silk moths large and small have been featured. In this year of caterpillar glory, several of the not-so-nice moths, including Fall Webworm, have enjoyed a renaissance as well. Actually, the crescendo of Fall Webworm has been building over the past several years and this Bug Guy is hoping they have reached the climax in our region. Fall webworms are causing quite a mess. Complaints about their numbers have been coming in from Baltimore to Washington as they denude trees of leaves and festoon them with their messy, persistent webs. 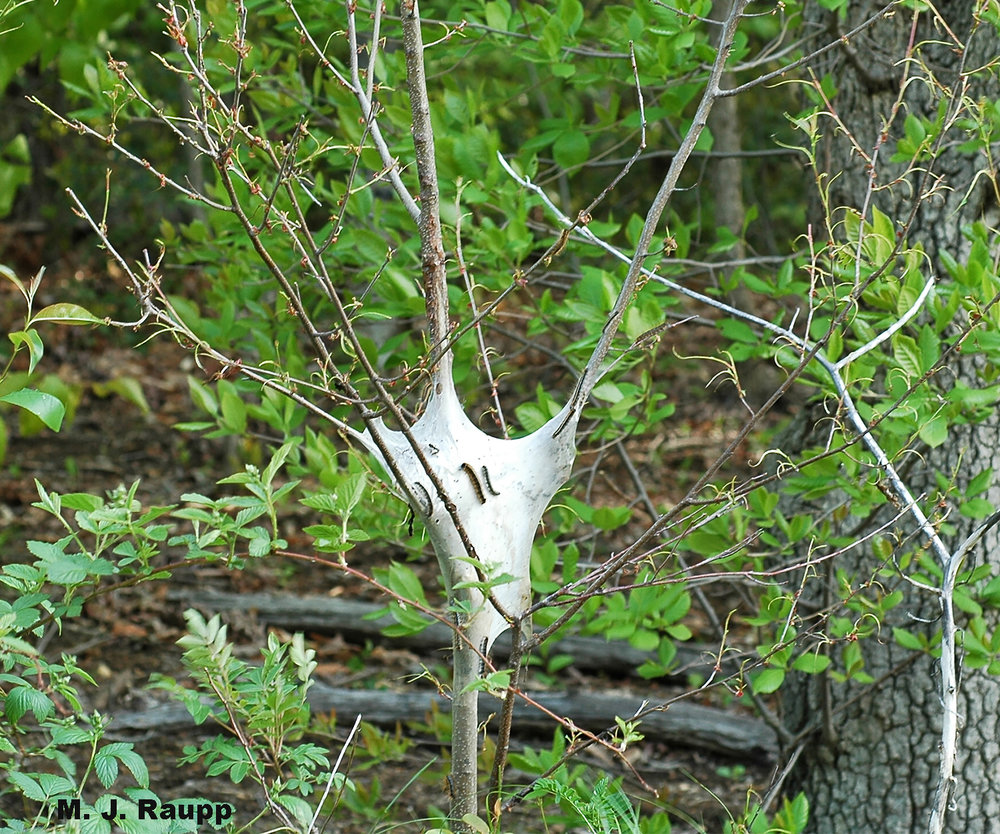 Eastern tent caterpillars are spring feeders whose tents wind-up in the crotches of branches on preferred hosts like cherry.

As I visited with folks this summer, several asked about these ubiquitous “tent caterpillars”. Let’s set the record straight: tent caterpillars, webworms, what’s the difference and how do you tell them apart? It’s easy. Eastern Tent Caterpillars (ETC) appear in March and early April in our area and build tents around branches in the crotches where branches diverge, or where limbs join the trunk. The common hosts of ETC are trees in the rose family such as cherry and apple. ETC leave the safety of their nests to feed on foliage along the branches, returning to their nests by evening after eating their fill. They will abandon their nests to pupate on the ground and emerge as adult moths in June and July. By contrast, Fall Webworms first appear in May and June and build expansive nests on the terminals (ends) of branches, incorporating the foliage they will feed upon. A second generation follows the first and in this year of moth and butterfly nirvana, they and their nests are super abundant through July, August, and September. 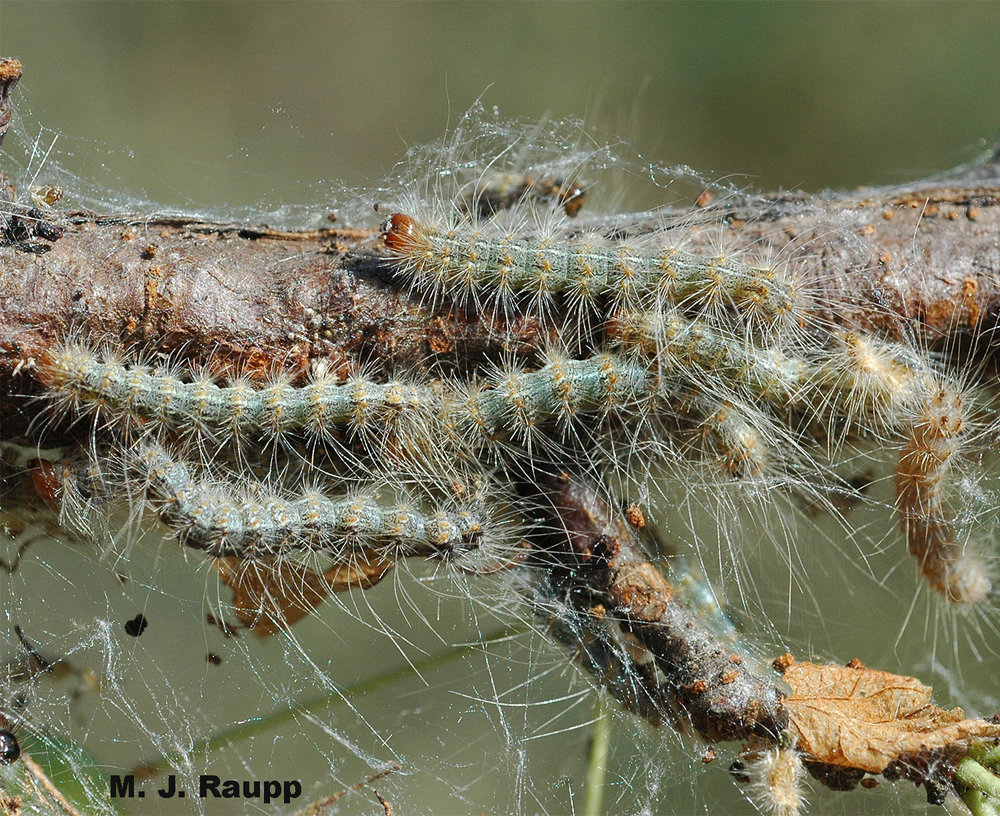 Fall Webworms are one of the most catholic of all caterpillars and eat several common trees in our area including cherry, crabapple, maple, sweet gum, sycamore, and walnut. Fall Webworms are known to feed on more than 200 species of plants. Two distinct tribes of Fall Webworms have been described, one with black heads and others with red heads. In the latter half of August, we near the finale of webworm activity for the year. The webworm caterpillars in the nests will soon vacate their shelters to form pupae in the leaf litter and duff beneath trees, where they will spend the autumn, winter, and early spring. Next spring and early summer, adult Fall Webworm moths will emerge from the soil, find mates, and lay hundreds of eggs on the undersides of leaves. Tiny caterpillars hatch and spin small webs, first around their natal leaf and later around small clusters of leaves on the same branch. Inside the relative safety of these webs, larvae munch on leaves. As they grow, larvae enlarge the web to include ever-greater expanses of leaves and branches. When Fall Webworms are abundant, entire trees may be enclosed in these webs. After the first generation of webworms has developed, they move to the ground to pupate, produce new adults, and the cycle repeats. In Maryland, two generations of Fall Webworm are common annually, while in southern states such as Georgia and Texas as many as four generations occur each year.

In most years and most locations, Fall Webworms do not cause serious damage to trees. However, their nests create a bad case of “ugly” that persists well into the winter. Of course, one easy way to be done with these messy guys is to simply remove them by hand or with pruners when you first see the nests. If nests are far above the ground, a pole pruner may be handy. And don’t just toss the nests aside or you may learn that the caterpillars can march right back up the tree. Place the nest in a bag and discard it. Fortunately for us, Fall Webworm cycles wax and wane in a given area with years of hordes followed by years of few.

A look inside a webworm nest often reveals caterpillars twitching nervously, and why not? A Polistes wasp has landed on the web, extracted a webworm, and turned it into a ball of protein ready for transport back to the nest, food for developing wasp larvae. 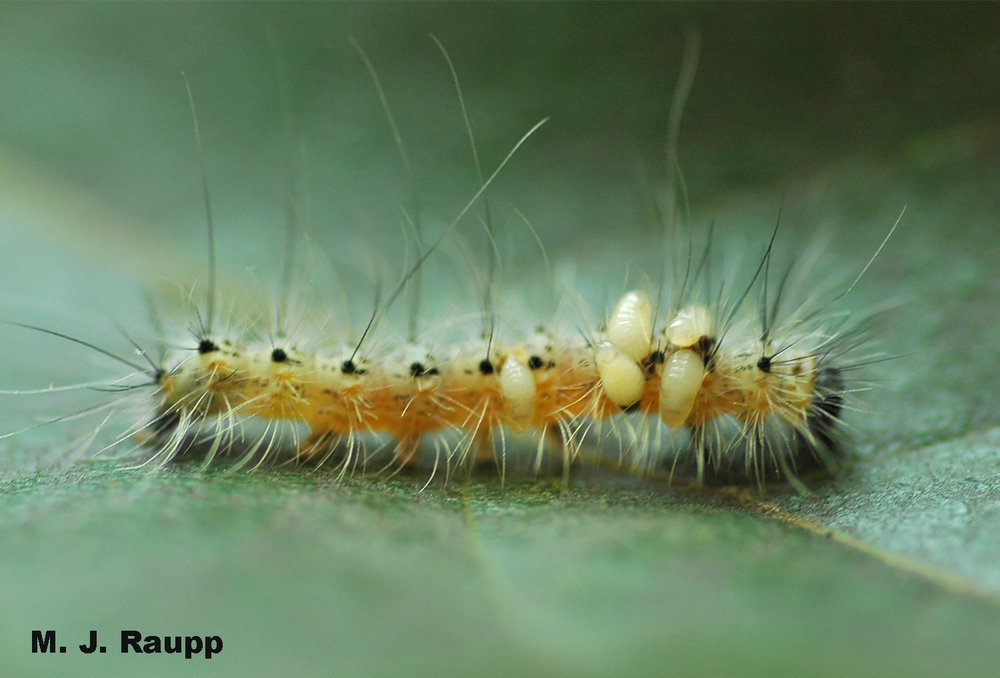 Larvae of parasitic wasps emerge from the body of a fall webworm after devouring its internal organs.

More than 50 species of parasitoids and 30 species of predators are known to attack and kill Fall Webworm in North America. People often ask if this is yet another invasive species from another land causing trouble in the US. Nope, this pest is a home grown native that loves our native trees. One issue that really makes me peevish is the ever-increasing influx of exotic and invasive pests we find in our landscapes and gardens. Just think about the misery caused by Japanese beetles, gypsy moths, and emerald ash borer. I am often asked if this is a one-way street, with the USA the recipient of nasty bugs and the rest of the world getting off scot-free. Absolutely not! One of our pesky “gifts” to the rest of the world is Fall Webworm. In the 1940’s this insect was accidentally introduced to Hungary from North America. It has now spread throughout large parts of Europe and Asia. In China, Fall Webworm is known as the North American White Moth and it has become one of the most devastating of all forest pests by damaging thousands of acres of trees each year. Alas, in a world with a global economy we seem destined to share a global biota.

And that’s not all; deadly assassin bugs like this female wheel bug find fall webworms delectable even while giving a ride to a complacent mate. Yellow jackets also plunder fall webworm tents to bring juicy caterpillars home to feed their young.

Bug of the Week thanks Dr. Shrewsbury for spotting the paper wasp extracting webworms from their nests. ‘Insects that Feed on Trees and Shrubs’ by Warren Johnson and Howard Lyon was used as a reference for this episode.