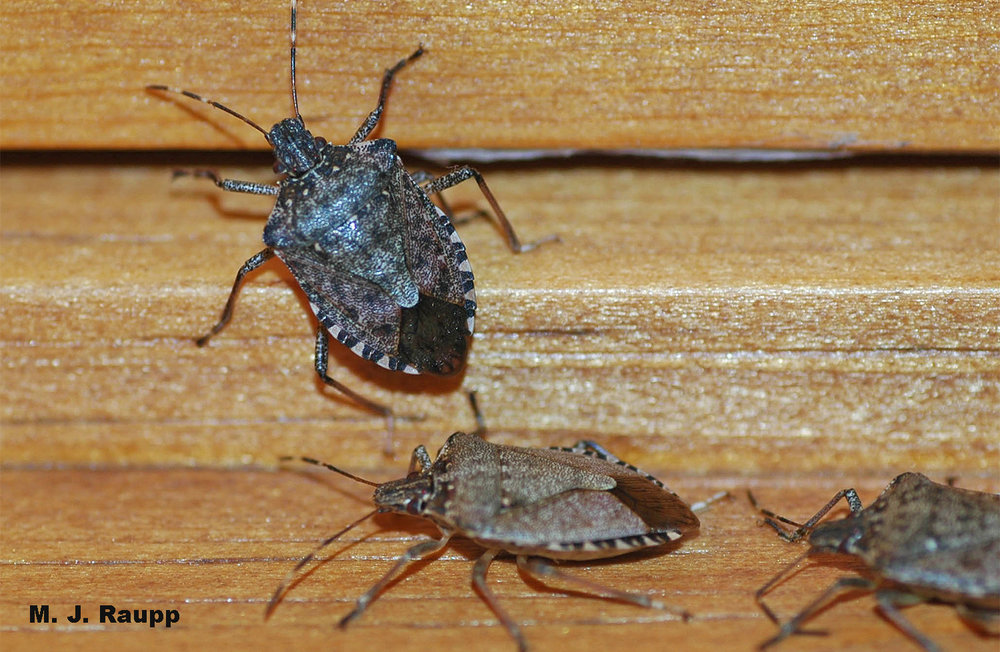 After a good year of plundering crops and fruit and dodging predators and parasitoids, numbers of stink bugs invading homes is on the rise.

This summer witnessed the renaissance of many of our six-legged friends including butterflies and silk moths, but also some nefarious pests like orangestriped oakworm and fall webworm. These were not the only pests on the upswing. Last week stink bugs crashed an outdoor gathering at a friend’s home. Yesterday, at a park in Keedysville, MD, chagrined parents swatted swarms of stink bugs as they collided with children and landed on swings and slides. Over the past two weeks, a deluge of phone calls and emails marked an uptick in reports of brown marmorated stink bugs leering into windows and collecting on siding. The passing of the autumnal equinox marks the beginning of the stink bug’s quest for overwintering refuge and proclaims the start of the home invasion season, a stinky annual tradition throughout much of the country.

They stormed my home climbing walls, finding gaps in screens and siding. They scaled my door frames, ran across my table, partied on my window sills, and probed my walls. The final insult was to lay claim to my coffee cup before my first sip of dark roast.

First discovered near Allentown, PA in the late 1990s, brown marmorated stink bugs (BMSB) now occupy 44 states and four Canadian provinces in North America. Why are stink bugs on the move now? For the past several months, stink bugs have been fattening up on corn, soybeans, garden vegetables, and fruit. But soon this cornucopia of earthly delights will disappear for BMSB and other herbivorous insects. In temperate locations like Maryland, winter halts the growth of deciduous trees and shrubs and withers herbaceous plants. Food for plant and fruit-eating stink bugs all but disappears. With the arrival of cold weather, stink bug movement slows to a crawl and their development grinds to a halt. Prior to this inimical season, stink bugs seek refuge to chill-out where they will be protected from harsh weather and dangerous predators. 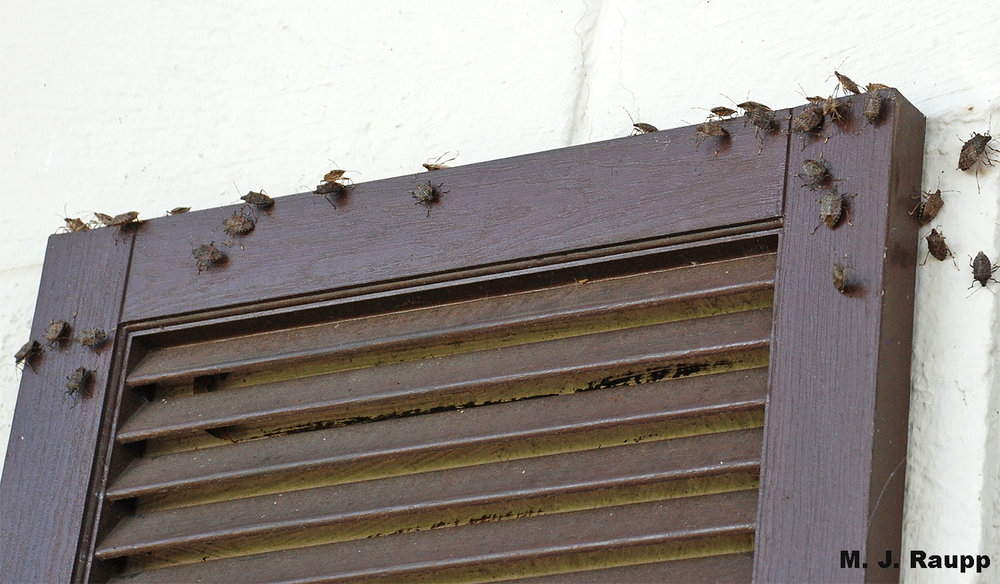 Why do stink bugs enter homes and man-made structures? Some folks incorrectly believe these home invasions provide warm winter refuge for stink bugs. Bear in mind that millions of years ago when these creatures evolved, there were no mansions or man-made structures to invade. Until recently, the natural winter redoubts of these stinkers were largely unknown. However, a clever study revealed large, freshly deceased but still standing trees are a prime winter hideout for stink bugs in natural settings. The loose bark of these trees affords a fine location for stink bugs to crawl underneath and escape the ravages of winter. Rocky ridge tops provide many dead trees and abundant places for stink bugs to chill-out. For many viewers of Bug of the Week, stink bugs on rocky ridge tops seems like a remote problem. However, the nuisance potential of BMSB is almost without equal. To a stink bug, a home provides a wonderful assortment of overwintering opportunities beneath siding, behind shutters, and in attics. The pending invasion some homeowners face is no trivial matter. In 2011, a homeowner in western Maryland captured more than 26,000 BMSBs from January through June as they moved about his home seeking egress from their overwintering refuge. Yikes!

Why do populations of BMSB fluctuate so dramatically from year to year and place to place? Scientists at Virginia Tech and the USDA’s Appalachian Fruit Lab have evidence that visits from polar vortices in the winters of 2014 and 2015 put a beat-down on overwintering BMSB in our region. Fascinating studies at the University of Maryland suggest that our smoking hot summers kill some of the gut microbiota critical to the normal growth and development of stink bug nymphs. Mounting evidence from several universities and government laboratories in our region suggests that indigenous and introduced predators and parasites may be catching up with stink bugs and levying a toll on their populations (see Death of a stink bug, Part 1, Part 2, Part 3, and Part 4).  My money is on the possibility that all of these factors, and perhaps some still unknown, conspired to reduce stink bug numbers in our region over the past several years. However, as is often the case in the natural world, as prey populations decline, so too do numbers of the predators, pathogens, and parasites attacking them. Perhaps a relative dearth of stink bugs in preceding years and a resultant regional decline in Mother Nature’s hit squad has allowed stink bugs populations to rebound a bit this year. Only Mother Nature and the stink bugs know for sure. Is this a crescendo leading to the return of stink bugs to major pest status here in the DMV? Only time will tell. One thing is certain, over the next several weeks stink bugs will be on the move. It’s time to seal cracks and crevices around the home, replace worn weather-stripping and door sweeps, and make sure that screens are in good repair. Steps to keep stink bugs out will also help to keep energy in during the winter season, paying dividends now by reducing the stink bug nuisance and later by saving energy costs.

Bug of the Week thanks Marie, Tom, Eloise, Abigail, and members of the BMSB Working Group for providing information and inspiration for this episode. Interesting studies including one by D. B. Inkley, “Characteristics of home invasion by the brown marmorated stink bug (Hemiptera:  Pentatomidae)”, were also consulted.

To learn how to keep BMSB out of your home and what to do when they get in, please watch the following video: Brown Marmorated Stink Bug Control: Keeping Stink Bugs Out of Your House﻿