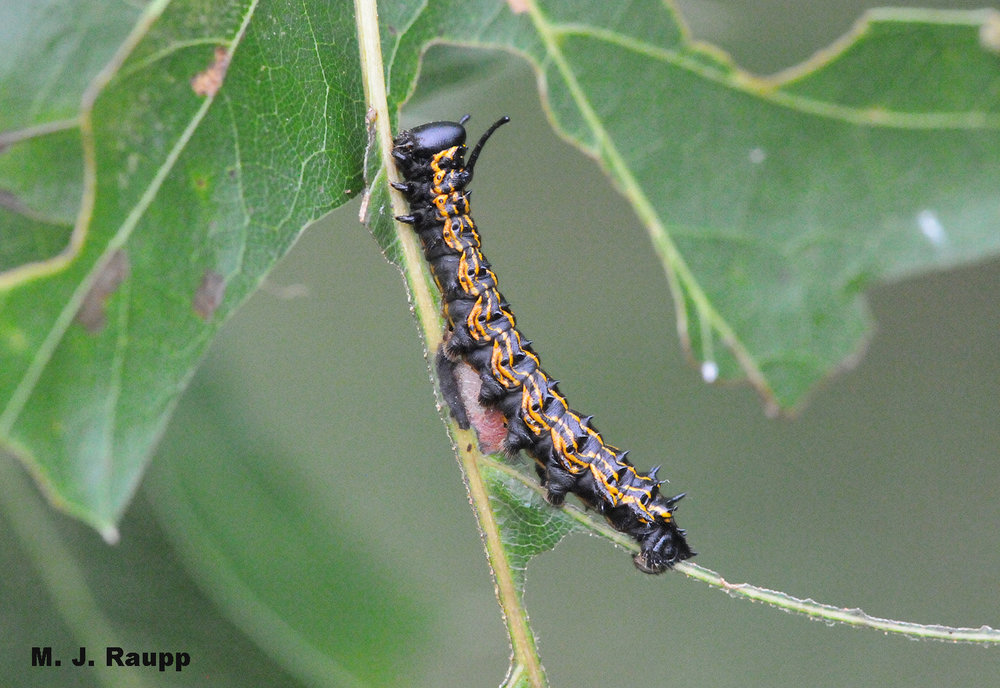 Orange racing stripes and a pair of fleshy horns behind the head make the oakworm one cool looking caterpillar. 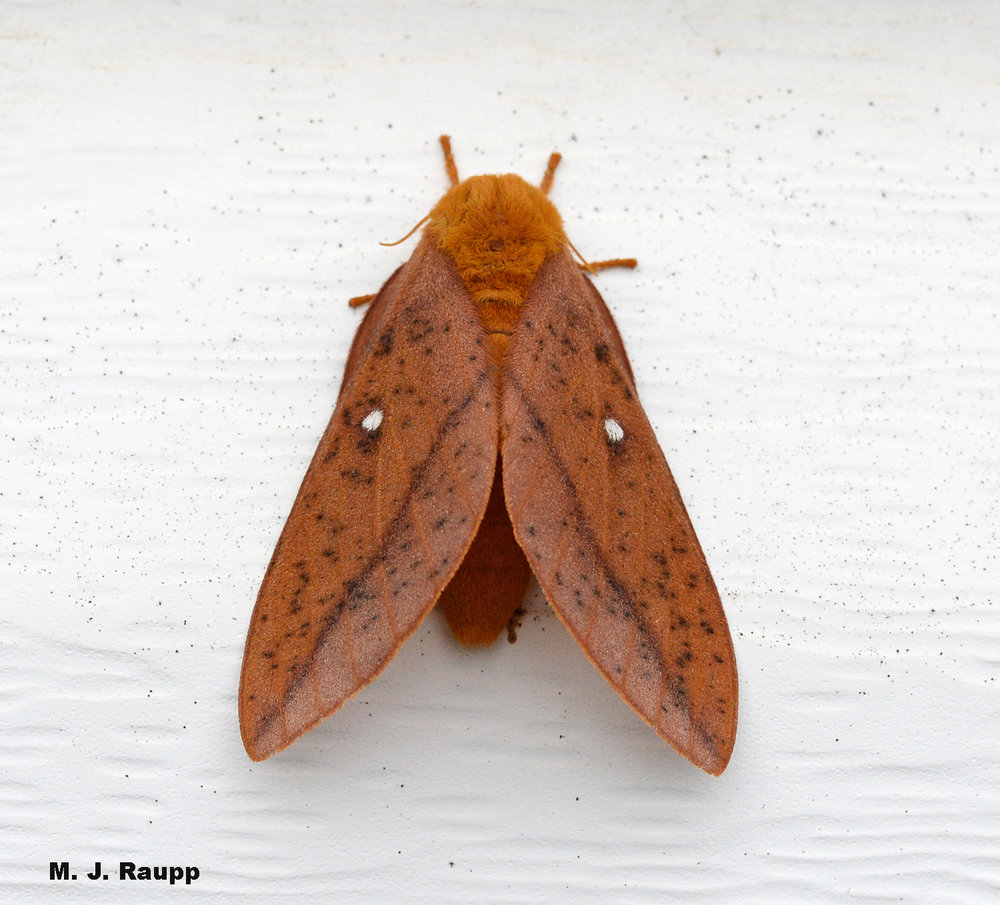 The spring and summer of 2019 have witnessed a renaissance of charismatic moths and butterflies. This season we visited beautiful brush-footed butterflies, spectacular swallowtails, and a bevy of stupendous silk moths including cecropia, promethea, and luna. Most of these wonderful moths and butterflies never become common enough to be considered pests and tend to consume plants that are not economically important. Of course, exceptions do exist. One gourmand shared her sad story of the disappearing dill, consumed by a hungry horde of black swallowtail caterpillars. This week we meet a duo of wild native silk moths that have a predilection for two of our most common and important landscape trees – oaks and maples. Periodically, oakworms and mapleworms cause a bit of trouble when Mother Nature presents conditions that favor survival of these caterpillars. Outbreaks can occur and caterpillar depredations are not uncommon throughout the range of these insects. Fortunately outbreaks are usually short lived and brought to closure by naturally occurring parasites and predators – Mother Nature’s hit squad. 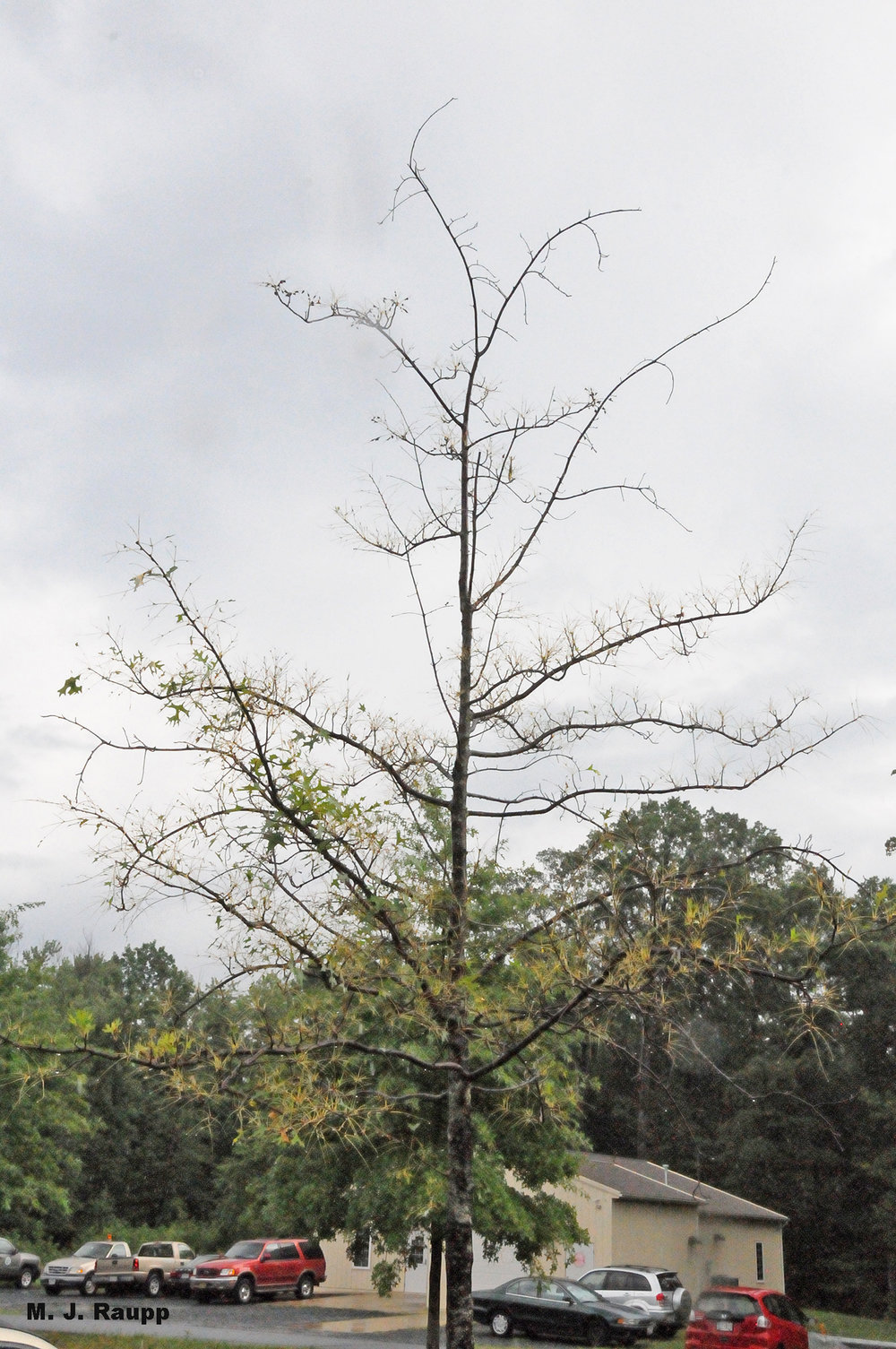 In some years oakworms will strip oaks of leaves.

In Maryland, adult orangestriped oakworms first appear in May from pupae that survived winter and spring in the soil. These moths mate and females lay eggs on the underside of leaves of favored hosts including oak, hickory, and birch. Eggs hatch and the tiny larvae feed gregariously, first as skeletonizers removing small bites of leaf epidermis, but later by devouring leaves right down to the mid-vein. After completing development, caterpillars move to the soil to pupate and a second generation of adults issues forth to repeat the cycle. 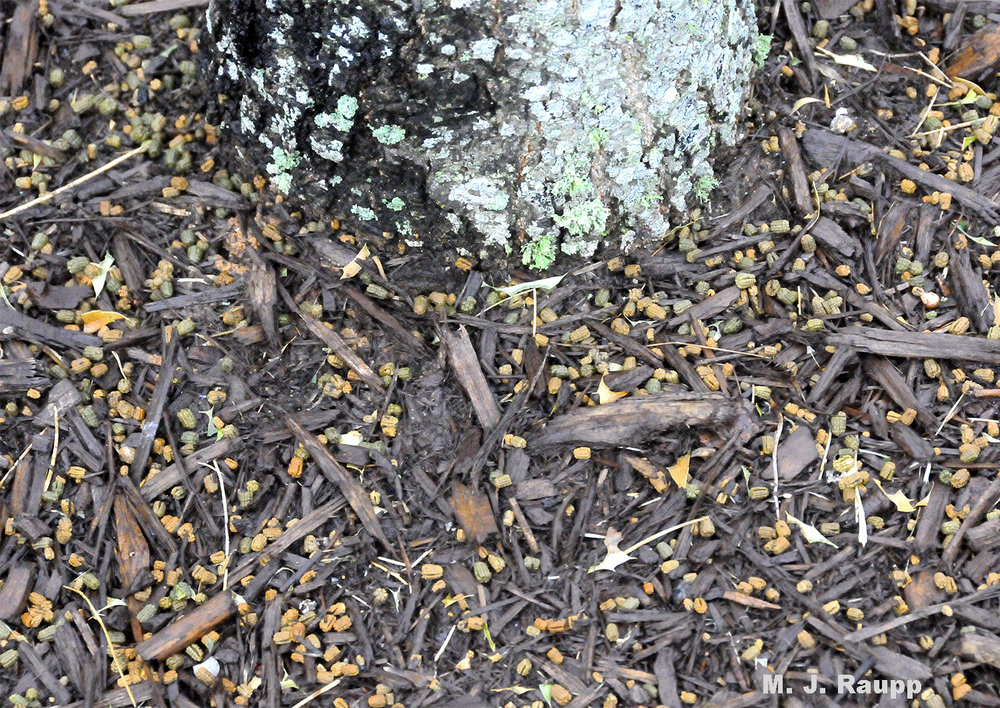 Telltale pellets of frass (insect poop, a technical term) beneath a tree can mark the presence of caterpillars feeding above.

The life cycle of the greenstriped mapleworm is similar to its cousin the orangestriped oakworm with respect to overwintering in the soil and emerging as adults in spring to colonize trees, where its eggs are deposited on leaves. Throughout much of its range there are two generations, but in the deep south there may be three or more. A critical part of the life cycles of both of these beauties is to drop from the tree when larval development is complete, burrow into soil to pupate, chill-out through autumn and winter, and emerge as an adult in spring ready to find a mate and lay eggs on leaves. Normally, the exodus-from-trees part of the game is relatively straightforward and merely involves dodging ground-dwelling predators like spiders and predatory beetles, and excavating a cozy chamber in which to pupate. However, humans have created a new challenge for earth-bound caterpillars in the form of paved walking and cycling trails. Last week while enjoying one such trail circling a small lake in Columbia, Maryland, I was astonished by vast numbers of oakworms and mapleworms running for their lives to escape the athletic shoes and bicycle tires of fitness-bound humans. Now, don’t get me wrong, these trails are treasures bringing adults and children into contact with the natural world, but oy vey, trails, sidewalks, and roadways are virtual no-bug lands for many six-legged creatures whose lives depend on soil!

Stripped leaves tell us oakworms are nearby and sure enough the cluster has moved several meters away to hide from enemies. After leaving the relative safety of the tree, the pathway beneath becomes a graveyard for unlucky oakworms. Further along the trail, a mapleworm searches for its next leafy meal. But on the ground, death is only a footstep away. Run for your lives caterpillars!

While enjoying my walk and dodging as many caterpillars as possible, I wondered how some of the carnage could be reduced. Perhaps parts of the trail could be closed during these caterpillar migrations or maybe small signs warning of caterpillar crossings could be installed beneath oaks and maples along the pathways. We do this for deer and other wildlife, right? Unlikely. However, toward the end of my walk a trio of mothers with children in tow stopped to admire an oakworm scurrying across the path. One remarked about the plight of the caterpillar, bent down, plucked the larva from the trail, and moved it to the safety of leaf litter along the trail’s edge. The children smiled. Maternal instinct and caterpillars creating a teachable moment for the next generation of naturalists. You go moms!